From what we all know and have seen in Moonlight, vampires are paralysed when staked and killed when burning in a fire. Knowing that, there were always two questions that came up in discussions I have been part of.

No real satisfactory answer was ever given in our circle as far as I could remember. It would be nice to hear from the old discussion forums, what they had to say……..

In the comments of one of our earlier post this month, Emerald provided us with this: – Q&A With Moonlight’s Creator ~ Trevor Munson (reprinted here with permission from Trevor & the Moonlight VampSister’s Messageboard)

Here is part of the question and the answer Trevor gave:

Q: Were there any plans to explain exactly how Coraline managed to survive a fire that should have killed most Vamps? With the scene of Lance’s hand regenerating in episode 12, most fans have assumed the ability to survive a fire is somehow tied in with either the Duvall’s particular bloodline, or their use of the mortal cure. Is this the direction you would have headed in, or did you have something different in mind?
Trevor: Personally, I like the mythology that suggests a vampire is able to survive a fire if their ashes aren’t scattered. That’s probably what we intended in the pilot episode, the bigger issue, for me was how we saw her in the window after she was staked which we had already set up as a rule. This was actually a problem that developed in the shooting which we became aware of too late.

As you can see, Trevor did not really give any answer to  either of the questions, but only told us that her not being paralysed, was a mistake made when they were shooting the scene.

FOYeur’s theory to the first question of how Coraline was able to get up, after being staked:

I give you one word, well three actually – Dextrocardia situs inversus – The simplest type of dextrocardia is one in which the heart is a mirror image of the normal heart, and no other problems exist. This condition is rare. (in other words, the heart is turned around and is more in the right side of the chest, than in the left side, where it is supposed to be)

My theory – When Mick staked Coraline, she faked being paralysed. How? If Coraline suffered from Dextrocardia, Mick could have missed the heart altogether. She realised it was her way out of the situation and only pretended to be down. The minute Mick looked away she  got up and only Beth saw her in the window, but as a human child, did not realise that it should not happen. Remember all the flash backs we get from this scene, is Beth dreaming or remembering the event.

This theory of mine can also hold water if we think about Episode 9, where Beth staked Coraline. How did she miss the heart? She stabbed on the wrong side and only caught the sack around the heart. 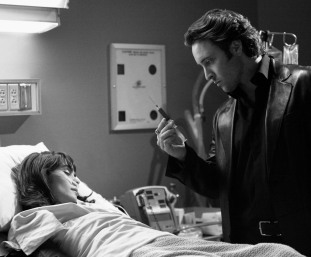 As an answer to the second question, I would go with the suggestion from the person who asked Trevor the question. The suggestion that the French noble bloodline and the cure had something to do with her sustaining burns, but not dying from it. With my theory of her not being paralysed at the time, she could then get up and maybe escape through a back door with only a few burns that could heal easily, just as Lance’s hand healed in Episode 12. Trevor’s answer about the ashes being able to recover, might just be a tad to far-fetched.

So many cool stories that could have been written……….

You have no idea the stuff that went on. I can’t believe Moonlight lasted as long as it did.

Remember those first teaser pics last summer, when Steve was wearing white pants, how many of us where squeeing with excitement

I decided to make a mini recap of all those episodes, dividing into 2 parts, cause there´s only so much excitement we can handle at once 😉

Here we go: Steve filling those pants with hunkyness so wonderfully and not forgetting about dat Face either

306 – there really was no need to point out the obvious 😉

314 – strutting in tighty whities. I want to take long walks with him on the beach…I would be walking backwards in front of him 😉

Thank you so 3 wardrobe