A Month of Mick with #AlexOLoughlin (# 23) – The French connection

Courtesans were basically mistresses. They were supported by wealthy men who provided them with anything they could ever want. Usually, a woman of an upper-class household would turn to the world of the courtesan for several different reasons.

To begin with, marriage in the nineteenth century was more of a business deal than an act of true love. This idea was abhorrent to some women, and so, not wanting to leave the comfort of their lifestyle would simply turn to a life that would allow them to continue on as they had without the confines of a husband. Some women chose the life of a courtesan in order to cultivate their minds which they usually, if they were not independent, were meant to keep dormant.

Courtesan: A woman prostitute, especially one whose clients are members of a royal court or men of high social standing.

The mark on Coraline’s back

Coraline/ Morgan showing us her tattoo

When Mick tells Beth more about Coraline, it seems that he did not know much about her family and background.

Two things we can learn from this knowledge:

Coraline only tells Mick in Episode 12, the full story about her French connection. Of course, at first, she lies to him again, by saying that Lance, who was after her, was one of 7 brothers from a noble bloodline in France in the 18th century (the time of the French Revolution – during the Reign of Terror (5 September 1793 – 28 July 1794). They were all turned by one sire, a cousin of King Louis XVI. She reveals that various members of the royal family were vampires and that was why the guillotine was used to get rid of them……

The seven cups of the siblings 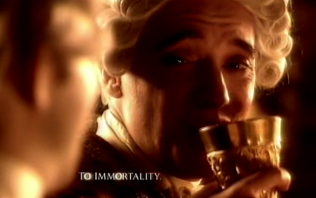 Only after they get caught by Lance, is the truth revealed that Coraline was one of the siblings and that Lance is actually her brother.

After the fight to capture Coraline, she sacrifices her freedom and promises to return the cure compound to Lance, in return for Mick life. But we discover more. As Lance stakes her, she says “You know what he will do to me“. Who was Coraline talking about? This for me means that there was somebody more powerful than Lance, back in France that they all answer to. Who was that?

My theory about it:

As an intelligent and free-spirited noblewoman of the time in France, Coraline was an ideal candidate to turn for the life of a courtesan. Coraline was most probably the cousin of King Louis’, favourite companion (courtesan) at the time – From there the fact that he sired her and her whole family as vampires, giving them immortality as a gift to her…… and to keep her with him for eternity as his loving companion. But Coraline ‘escaped’ from France and moved to LA, to be free of his power over her…… where she meets Mick, her obsession!

At last Mick getting his wish

Just because he is pretty

Just because he is pretty, when he is injured

There are some mysteries surrounding the bloodline.

One of them is that Lance has the ability to heal from after being burned – he does not turn to ash. Does everybody in the bloodline have this ability, or was it one of his own unique characteristics? I also guess that Lance had something to do with the original development of the cure during the ‘Reign of Terror”. And with it, it made him a powerful and rich man amongst the nobility, who paid him to help them during the massacre  (Josef did say that it was as if Lance was from another world and that Lance made him, Josef,  look like a pauper)

Lance healing from the burns

How I would have taken this part of the storyline further, if I was the producer or writer: 😀

With the human vampire hunters threatening the vampires in LA, by working with the authorities and the DA, the help of the European vampires are called in. Lance, Coraline, and their sire (the cousin of King Louis) arrive in LA. The naughty me, will make the cousin a very handsome devil of a man – one that can make Mick insanely jealous, because of his power over Coraline. 😛

But why would the French noble vampires have any interest to help the vampires in LA? Mick is the key! Having been part of the noble bloodline, taking the cure, and then being turned by Josef, who is from a totally different but very ancient bloodline, gave Mick some special abilities, that are of great interest to them! (You all remember my crazy theory at the end of this story?) :

What exactly all those “powers” or abilities could have been, I haven’t thought of yet…. 🙂

It feels to me that ‘Moonlight’s’ disappearing out of my grasp.