Behind the scenes of Feed – #AlexOLoughlin and his movies

It has been a long time since we’ve had a look at some of the old performances by Alex. Here are some of the trivia compiled from the DVD of Feed.

• ‘Feed’ was shot entirely in Australia on a small budget of 1 million Australian Dollar and a very tight shooting schedule of only 28 days. (mid January – mid February 2005)

• According to director Brett Leonard, feederism is especially prevalent in the USA, Great Britain and Germany. At the time the movie was shot, there were over 4,000 websites dedicated to the topic.
• The idea that Alex and Patrick got for the movie came from a Channel 4 documentary ‘Fat Girls and Feeders’ that first aired in the UK in March 2003.
• To get the right tone for ‘Feed’, the makers watched movies such as ‘Silence of the Lambs’, ‘Se7en’ and ‘8mm’.
• According to Jack Thompson his initial reaction when Patrick Thompson and Alex O’Loughlin brought the idea of ‘Feed’ to him was, “What is this, some weird nightmare that my son and Al had conceived after some really bad night on the booze?” 😀

• Alex O’Loughlin and Patrick Thompson are credited as ‘co-writers – based on an idea by’ and ‘co-producers’ of the movie. (The actual writer was Kieran Galvin and the producer, Melissa Beauford.)
• Alex O’Loughlin was to originally portray the part of Phillip Jackson (The policeman), and Patrick Thompson was to take on the role of Michael Carter (the feeder). But Brett Leonard changed it around.
• The gothic German house used in the cannibalism scene was shipped from Germany to Australia. The owners ran a furniture business and only several additional pieces were required for the feature.
• The video camera footage of Deirdre was actually filmed by Alex O’Loughlin in his role of Michael Carter.

• The internet cat-and-mouse sequences between the cyber crime cops and Michael Carter were written based on input from the head of the cyber crime unit in Canberra, Australia.
• The websites depicted in the movie were created especially for the production.
• Abbey’s and Phillip’s apartment in Bondi Beach was actually owned by Jack Thompson. 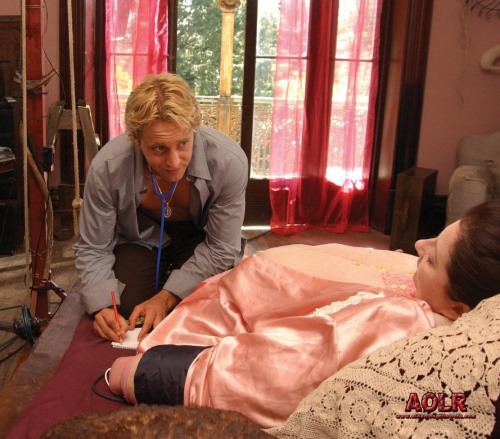 • To achieve authenticity, director Brett Leonard wanted the actors to be spontaneous, which meant that a lot of scenes were unrehearsed, such as scenes between Abbey and Phillip and the scene between Michael and Lucy. About the latter, Brett says in the DVD commentary, “We put her in the fat suit and out walks Alex O’Loughlin, naked, with a funnel to simulate force feeding her. So all of her giggles and her reactions are very spontaneous and just natural to the fact that that’s what happened to her in that scene.” 😳

• Gabby Millgate’s fat suit weighed about 66 lbs/30 kg. On the DVD there are extras that show how they created the suit.
• The pendant that Michael Carter wears is of Mother Mary. (this was confirmed by Alex himself, when asked about it)

• The food smearing scene between Deidre and Michael was one of the most disturbing scenes Brett Leonard has ever shot, “because both Gabby and Alex really went for it.” It was done in fifteen minutes with only him in the room with the actors, using a hand-held camera.

• Heathcote Hall, in Heathcote, New South Wales, was used as the location for Michael’s house where he kept Deidre. A lot of the trash in those scenes was authentic, as the lady who lived there, Maureen, did not spend a lot of time keeping house. 😯
• The movie was scored by Brett Leonard’s brother Gregg, who is a music producer.
• As cars are driven on the left side of the road in Australia, the driving scenes provided a challenge. Brett Leonard solved this by filming the actors with their hair parted on the opposite side, their costumes fitted accordingly and then “flopping” or mirroring the images in post production so that it looked as if the cars were driven on the right, with the steering wheels on the left.
• Alex O’Loughlin made the jump off the balcony himself, several times.

• Michael’s father, the old man in the bed, was actually Maureen’s father, Joe, who was not aware that they were filming the scene, with Maureen’s permission. “But his arm moved there and it freaked the living shit out of me when I was shooting it,” says Brett on the DVD. Joe passed away a week after the sequence was shot.
• Alex O’Loughlin put his foot unintentionally through the glass of one of the balcony doors during the struggle between his character and Phillip in Deidre’s room. You can hear the glass breaking.
• The alternate ending was requested by Becker Films International, who felt there had to be some form of redemption for Phillip. Brett Leonard chose not to use the sequence in the final cut, as it wasn’t as powerful as the one that he did select.

• Brett had “Young Girl” by Gary Puckett and the Union Gap in mind for the later deleted scene of Michael feeding Deidre burritos, but Gary Puckett would not give him permission to use the song.
• The poem that Deidre doesn’t like in the poetry reading deleted scene is The Fly by William Blake.

• The scene of Michael Carter pretending to be NSA agent Dak Stummer in the Chinese restaurant was shot before Alex O’Loughlin shaved his beard and dyed his hair blond for his role of Michael Carter. Unfortunately, Alex got quite sick shooting this sequence, most likely because of the amounts of MSG in the (cold) Chinese food he had to consume.

• An explanation of what happened to Phillip’s ear lies in the deleted Dak Stummer scene. In the feature, Phillip is seen with a bandage on his ear, seemingly with no clarification as to how he had gotten hurt. His ear actually got bitten off by a member of the Chinese Triad when Phillip went to meet Dak Stummer in Chinatown. The Stummer storyline was cut from the movie because it slowed down the pace.
• As Dak Stummer, Michael Carter gives Phillip a little two-fingered wave in the Chinese restaurant. Michael gives Phillip the same wave when Phillip drives away after confronting Michael in front of his house in Toledo.

• The two shots heard at the end of the movie is Phillip shooting Michael in each foot. The bullet holes can be seen in the closing shot. 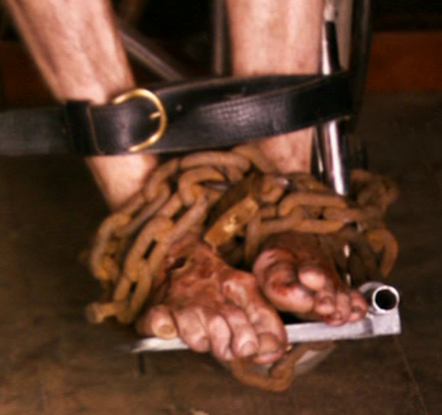 •  The only special effect in the movie is included in the ending, where a composite shot was created of Alex O’Loughlin’s head on the body of the thinnest man Brett Leonard could find.

Transcript of Alex talking about the movie can be found here

Gifs of a deleted scenes from the movie here 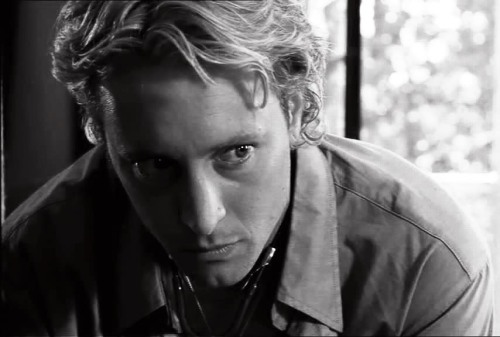 Transcript of Alex doing questions and answers can be found here

My review of the movie can be found here

Not everybody’s cup of tea, but we hope you enjoy learning more about Alex’s career and earlier movies.

Is Alex starving himself before he has an eating scene? I must remember to ask this, if I get to meet him 😀

Oh. One more round of noodles?

(these were from a deleted scene in Feed, video is on youtube, about 10 min long but Alex was only in the first 5)

A little quickie post with Michael for a change. Our blonde cherub wasn´t all that bad 😉

Take off your clothes, I mean jacket…oops.

Pretty sight… (oh he likes it too) Did you bring me a pressie?! Yey!

Get OUT! Eek! Helllp…

We can still report that 95% of all our searches are about Alex’s tattoos – And we still hope that what you found here, did indeed satisfy some of the hunger you had for his tattoos……..

Once again we would like to provide you with some visuals to help those who used specific searches that got to us. You will find that to save some space we have combined some of them with one visual:

We think you might have found the right place…..

Well, who ever searched for this, came to the right place. No doubt about it.

Have to look after the family jewels.

I hope this qualifies for huge boobs.

Apparently the same person who searched for the omg gif. Stop bothering us with silly searches!

He likes to provide for a soft cushion for the ladies to rest their heads on. Just look at that peeking bush!

We don’t really know who Alex Mcloughlin is (However, Alex O’Loughlin seems to have a partner and Steve McGarrett doesn’t want to call Catherine his girlfriend – maybe this is the reason why?!)

They won´t survive for long. Their hearts simply explode…

Is it ever hard enough?

You can find our poll on the kisses here

(This is sooooo bad…how did it get in here?!)

Well with so many searching for it, we could hardly leave it out….. 😛

Almost perfect fit for our screen. Size looks about right.

We are not familiar with John O’Loughlin’s work, but hope Alex/Steve shirtless will do….

stalking is such a strong word

Any stalker, looking this good, is welcome in my neighborhood 😉

not stalker i prefer the term

We prefer Intense Research ourselves too 😉 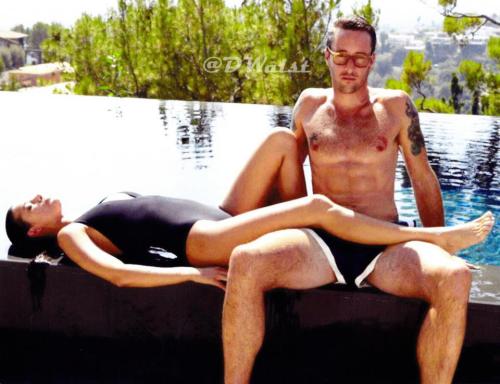 Will we ever be treated to such a crotch view, ever again….

Okay, you caught us. We did use this search term last time, but do you blame us for using it again? 😛

how to pronounce alexandre foyre

We did send a request to his publicist to help us out with some frontal footage of this scene and the other day somebody pitched up at our doorstep with a RO…. go figure?! 😛

Yes please, all of us.

They are amazing… *thud*

We don’t have footage of it, but have a look at the movie “Invictus” – some of the best rugby scrum work you will ever see in a film.

So did the O’Caan shippers get their wish? Did Alex and Scott get hitched? We don’t really know where the scar comes in though…. 🙂

i wanna have your babies

“Really? Let me think about that….”

And with this our searches part 2 is over. See you next time.

We hope you once again enjoyed an addition of our searches…..keep looking for him……you will find us here!!

A reminder of the canvass you are working with……. 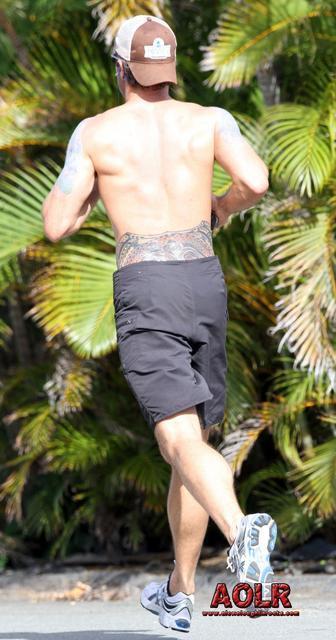 We are adding a few more samples of the tattoo – Please remember they were not posed for, so apologies for the poor quality…. 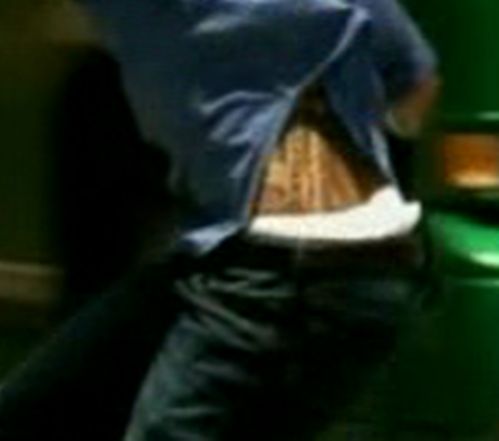 And feast your eyes on the bare beauty once more……

And another closer look….

Please complete the picture for us!

Thank you to everybody that have already send in their entries

Send your entries to: intense.study.aol@gmail.com

And remember, it does not have to be a drawing and it can be full of your imagination!!