For me the start of Moonlight was great. Right from the very beginning we get to know what we are dealing with! They gave us just enough to get started and as the series went on they revealed something more with each episode.

One of the first things about the interview, was the fact that it was set up as Mick dreaming – dreaming of how he would like to explain his existence. This tells us about his deep-seated hunger to be understood as someone who is not a monster. 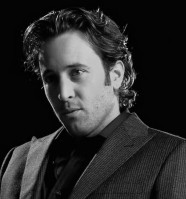 It also tells us that this story is not going to be one of the old tales of, good (being the church) vs evil (being the vampire monsters). They are taking things like Holy water, crosses and monster like shape shifting evil creatures out of the equation.

One of the important factor that we also learn about, is that they have rules that they live by. These rules are there to protect them from being discovered. Mick himself has taken those rules even further and he has set boundaries and rules for himself. He protects the innocence and never feeds on the living.

The things we learn about them during the series and how their bodies function are all discussed in one of my old story, and you can read it here:

Alex O’Loughlin is living it up, in Mick’s Moonlight body.

His face is just so full of mischief here ……sigh…..

He really looks so young and sweet here!

Here is a longer version of the opening sequence interview, with some of the things that did not make it onto our screens:

I didn’t have a gray hair when I started ‘Moonlight,’ now I’m on the Clooney train.

mini Will getting crispy – and sad

Well actually, he is just breaking my heart…Alex has the perfect face for this sadness…