THREE years ago Aussie Alex O’Loughlin, now 31, moved to LA to find work. Today, he’s firming as one of the hottest new stars on US TV, as his pilot vampire show Moonlight storms the small screen.

He says he had to leave Australia for work. “Quite frankly, I couldn’t survive as an actor … I was sick of waiting tables and pouring beers, digging holes on building sites,” he says. It was a gamble that paid off. Now showing on Ch 9 here, O’Loughlin is hoping the romantic thriller will be picked up for another season.

O’Loughlin moved to LA with girlfriend Holly Valance, and he says he’s slowly adjusted to life in LA-LA land. “The transition took me about a year,” he says. “I found it difficult to adjust to LA life. But I’ve got a great life here now … and I’m working which makes a big difference.”

Does he ever get overwhelmed bv how far he has come? “Not really,” he says quite philosophically. “Only because it’s been such a long road for me. I’ve worked every day for this. The last 12-13 years has been a constant battle … I don’t take it for granted.”

O’Loughlin says despite his character being a vampire, there is a lot to like in Mick St John. “What I like about Mick is he s a victim of circumstance, he explains. “He was made into a vampire against his own will.

Over the years he decided to use his powers for good and become a private investigator. “He’s someone who always tries to do the right thing. But he’s also flawed. I think he’s a character we will all relate to at some stage, because he’s a heart-centred character.”

O’Loughlin says the vampire genre has not only fascinated viewers in the years since 1990s cult series Buffy the Vampire Slayer and its spin-off Angel.

“Let’s go a little further back,” he says. “Let’s look at history over the last couple of thousands of years. What is it about creatures that consume human blood to exist? And why is it if there was no truth behind the myth, that so many cultures all over the world as far back as we can trace, have stories about it? There’s such a mysterious, sensual element. I think we live vicariously through vampires.”

Despite all the blood-sucking O’Loughlin says it’s “so much fun” playing a vampire. But life on set is full of long days – and very often – nights. “The longest I’ve done is 21 hours on set,” he says. “Every day is a long day. I think we average 16-17 hours. Life on set is all about the show.”

O’Loughlin says he is yet to hear whether Moonlight will be signed on for a second series, and with the writers striking, the future is uncertain. 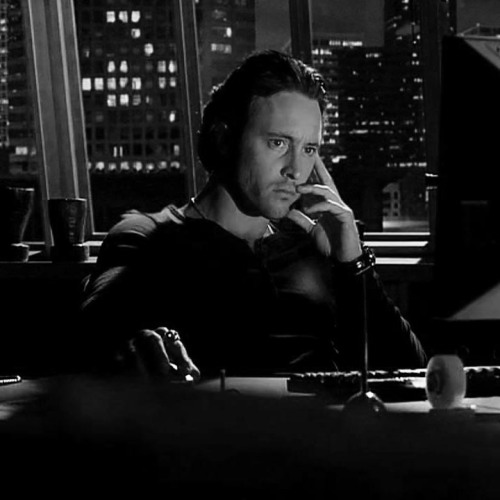 “This writers’ strike has us stitched up,” he says. “But I’ve done my job and hopefully it’s good enough to get another series. Hopefully these writers will come out of this strike sooner rather than later and we can all continue working.”

So how would O’Loughlin describe the show in five words or less? He thinks before replying: “Dark, funny, sexy, intriguing and a guilty pleasure,” he says.

Well, that’s really eight words …  but who’s going to argue with a vampire!

Filed under Alex O´Loughlin, articles, Interviews, Mick wants to kiss you gently with his fangs., Moonlight