‘Moonlight’ gets steamy(ier); I get star Alex O’Loughlin to pose for this hot photo! – 2008

Have you ever met a star that someone close to you just loves? And if so, did you find yourself asking that celebrity to do something for him or her?

By Mandi Bierly on 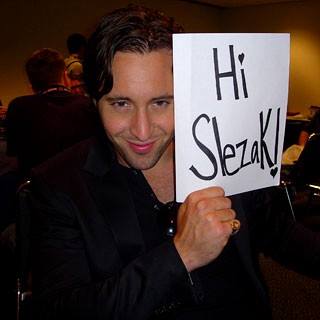 Here’s why I’m asking: In honor of Moonlight returning with the first of four new episodes on April 25 (CBS, 9 p.m. ET/PT), I suggested that I do one of my PopWatch Duels with Alex O’Loughlin, who plays Mick, and Jason Dohring, who plays Josef. (Look for it later this week.) When my colleague Michael Slezak found out that O’Loughlin and Dohring would be in town April 20 for New York Comic Con, he decided that I would be doing interviews for that Duel in person. (Apparently, ‘When you have an opportunity to be in the same room with Alex O’Loughlin, you take it’, is the second rule of journalism. Right after, ‘When you have a picture of a water-skiing squirrel, you run it.’ That one I read in Time Out New York once, and I vehemently concur.) So, yesterday, at the end of my chat with O’Loughlin, I asked him to pose for a photo — with a sign that I made for the occasion. (He, by the way, did so willingly. And told me to tell Slezak he said, “Hi.”)

Here’s what I learned at Comic Con yesterday: 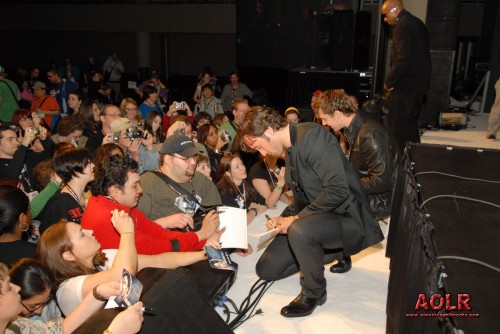 • Ladies (and Slezak) really do love Alex O’Loughlin… O’Loughlin and Dohring participated in a panel to promote the show’s return. When the moderator asked them to name their favorite episodes, O’Loughlin said he had “favorite scenes.” Cue the suggestions from women in the crowd: “The shower scene! THE SHOWER SCENE!” (You know the one, with Sophia Myles, who plays Beth.) When it came time for the official audience participation, 25 fans queued at a mike to ask a question — only one of them was male.

• But they do not like Coraline. The panel began with a 12-minute clip reel. O’Loughlin and Dohring noted that the loudest applause was for Beth staking/stabbing Coraline — and that it was “such a shame” that Sossamon couldn’t make it that day. 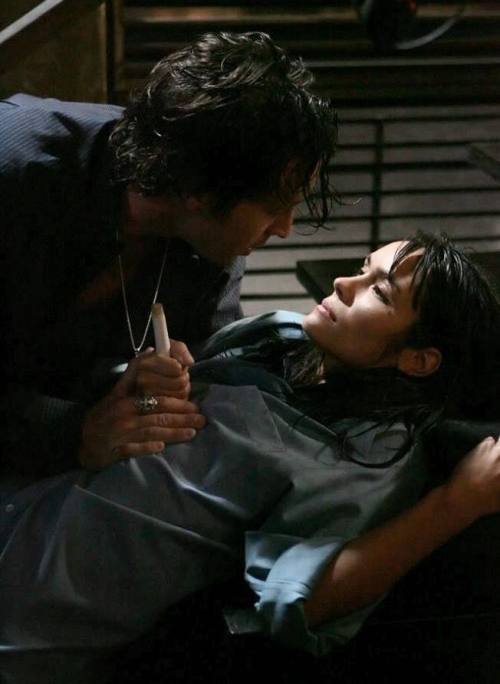 • I am, apparently, actually a gay man. When we last left Mick, he’d become human, albeit temporarily. In the April 25 episode, Beth is in danger — again — and Mick realizes he can’t save her withouthis vampire power. He demands that Josef turn him back. The short clip shown, of Josef drinking from Mick’s neck? Kinda hot, y’all. “It wasn’t our intention to make the scene hot,” O’Loughlin said, when I asked him about it after the panel. (Because you know that I did.) 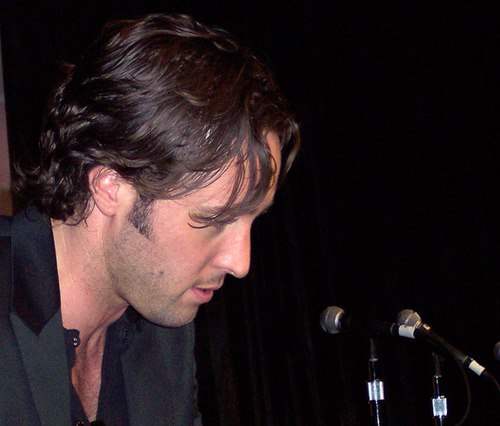 But it is to the show’s advantage if we, the viewers, find it hot, right? “Sure, absolutely. What my intention is as an actor — as is Jason’s, it’s safe to say — is to make the scene true. In any dramatic scene you play on a show, you can’t play ‘hotness,’ you can’t play ‘humor.’ You’ve just got to go for the truth of the scene. And we did, and I think it kinda worked.” According to Dohring, it hellaworked. “Dude, when you see the scene, I swear to god, I was emotional for an hour or two afterward. I’m not f—in’ jokin’,” he told me. “Usually, it doesn’t hit me like that, or it’s five or ten minutes. It’s very f—in’ moving, because we got a 30-piece orchestra for that scene and our director, David Barrett, kept telling these guys, ‘Play like you’re never gonna play again,’ and these guys were, like, going crazy. That clip didn’t do it justice. You’ll see some f—in’ amazing stuff.” (Like them ending up on a table? But again, Dohring stresses that it wasn’t their intention to make the scene “hot.”) “The thing is, the dude’s human, which is what he’s wanted. It’s the thing he’s always bitchin’ to me about: ‘I want to be human.’ And then he f—in’ can’t. It’s like, here, I have to take from you the one thing that you want. That’s f—ed up.” (Or, what I call good television. And, of course, hot.)

• Mick and Beth may finally get it on. “I think that they are going to do that,” O’Loughlin said, when an audience member asked if the pair will “seal the deal.” Now whether he meant sometime during Season 1’s final four episodes, or just eventually, he didn’t say. I can tell you that one of the clips from an upcoming episode included a passionate kiss. Beth tells Mick that she’s not the thing keeping them apart, and neither is his vampirism. It’s him — he’s afraid of getting hurt. She starts to walk away, and he grabs her. (You can hear the squeals, right?)

•  The future of the show is still up in the air. There’s been no pick up, but the rabid fan support (Moonlight Blood Drive!) gives O’Loughlin hope that there will be. He told me he’s turned down film roles that would conflict with work on Moonlight‘s hypothetical second season. Dohring said they’re filming the final episode of Season 1 now, and it includes a cliffhanger. “You see vampires from a bunch of different circles, all walks of life, meeting together to deal with a threat that comes on all of us…” What can you do, besides open a vein, if you want a Season 2? Tune in now, Dohring says. “I think the better we do [in the ratings] with these first two episodes, the better the chance we have.” And, hey, if you haven’t heard, this Friday’s episode is gonna be hot.