You remember how the PopWatch Duel works: We ask two costars for their picks on a certain topic. You decide whose list is better by casting a vote in the comments section. They try to tell themselves that they don’t care who wins.

In honor of Moonlight’s return tonight with the first of four new episodes we sat down with Alex O’Loughlin (left) and Jason Dohring (right) at New York Comic Con and asked them to each name five things that should live forever in pop culture. (They play vampires on the show. Get it?) Dohring’s worried that O’Loughlin sealed the win with his first choice, but we think we’ve got ourselves a fair fight. Their responses…

Five things that should live forever in pop culture:

1. Velcro. I think we all know why Velcro is as great as it is. It’s just terrific. You can stick an entire dining set to the roof. Very versatile: Shoes, nappies… sex toys. Whatever you need.

2. Monkey (aka Monkey Magic). The greatest thing that ever happened to television. It’s a Japanese show [dubbed in English] about these characters Monkey, Pigsy, Sandy, and Tripitaka, and they fight wars against demons. Monkey was born in an egg on a mountain top, and he rides a cloud, and he has a staff that he keeps behind his ear and grows to full size. It’s the best show ever. I thought I was Monkey when I was a kid. He wears this gold crown, and I’d wear one and stake vampires.

3. The Adidas shell toe triple stripe classic. Great sneaker. Get a pair. In any color you want. I prefer the black stripe on the white shoe. I’m shootin’ for an endorsement deal. Go Adidas. Did I say “Go Adidas? Adidas. Adidas. Adidas. Go Adidas.”

4. The iPhone. It’s revolutionized the way we live. It’s a great Internet tool in your pocket. It’s a global tool. I take my iPhone everywhere.

5. The mullet. I grew up in a mullet kind of world, a mullet-y school with mullet-y friends. I had several mullets over the years, so I have a longstanding personal relationship with the mullet and I’m ready to mullet anytime. I can mullet right now. RIGHT NOW.

1. Designer shoes. Look at these f’in shoes. [Points to his sneakers.] Gucci shoes. I got into designer clothes, dude, and once you get into it, you can’t go back. I started kinda working out, and you wear a designer shirt, and you’re like Dude, this feels like it wants to fit to your body. So, like, I don’t have to work out as much, but it still looks good. It’s great…. Alex is gonna take me shopping me later today, and I’m really excited about that. Apparently, he has a pair of Paul Smith flower shoes that he just bought, and he can actually pull them off ’cause he’s Australian, you know, and they kinda do things that we don’t do here in the States. I’m trying to get some fashion tips. 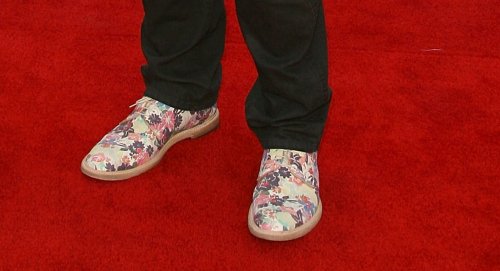 I guess this was the Paul Smith flower shoes Jason talked about. The picture of Alex’s shoes, was taken on the red carpet at the ‘Speed Racer‘ Premiere.

2. Love and morals. I was just thinking that I’d put a couple of things on here that I thought were real. If those go out, our society’s gone, dude. You wouldn’t have families. It sucks to see so many people break up. It doesn’t set a great example for people…. Love, even as friends — how enjoyable is a great conversation with a friend? There’s nothing better, dude. You can buy all the whatever you want, but sitting around with a cigar and chattin’ with my boy, here, is a really good time. We film till really late, so we’ll sit around on the WB lot at 2 in the morning, when nobody’s there, and just look up at the WB sign and go, “What the f— are we doing here?” It’s beautiful.

4. The banjo. No, I don’t play, but if you’ve ever seen a guy play the banjo or a fiddle really well, man, it’s cool stuff. You wouldn’t have Deliverance without the banjo. [Hums]

5. Veronica Mars. Unfortunately, it didn’t last forever, but it seems when you walk around a place like Comic Con that it does. Art’s the kinda thing that stays with people. You emotionally invest people and you emotionally invest yourself in something, and then it lasts. That’s pretty amazing, actually, isn’t it?

Okay, who wins the Duel? Alex O’Loughlin or Jason Dohring? 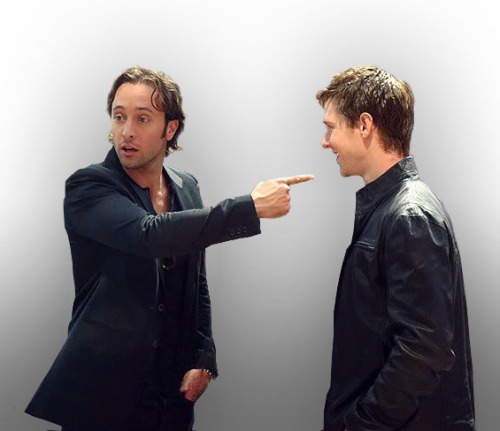