On 23 March 2019, the main actors from all three of executive producer Peter Lenkov’s TV shows, took part in a panel at the Paley. At the time, we made some post of the pictures,  interviews and our general commentary of that day, but we never posted a transcript of the actual panel or the interview on the carpet. The panel ran for an hour, but we decided to do an edited version of only the main parts with Alex. 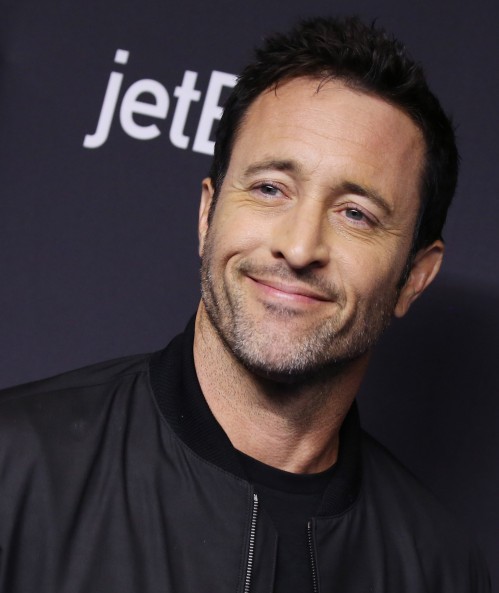 Alex: Dude, I haven’t figured that out either.

Alex: I mean, my fundamentals are like; show up, try not to bump into the furniture, say the stuff, and you know. It’s a .. I don’t know, look. I said to someone on the carpet out there, I’m a cog in the wheel that is this show … like, like we all are. We’re all cogs in a much greater wheel. It’s a collaborative art form.

You know, number one on the call sheet, simply means you’re probably going to do more work than other people. There’s nothing else to that, and there shouldn’t …. in my opinion. There… I don’t think it’s safe for an actor to approach it, in any other way. Well, it’s not safe for me, because I’m prone to self-possession (rolling his eyes) & [everybody laughing]

So, you know what I mean, .. so, it’s like if I sort of stay focused on.  But it’s…  There’s a synchronicity and there’s a sort of … there’s a something … there’s something magic that happens when it all works, and the show stays on the air.

But I think, [to Peter] this is not to blow too much smoke up your ass. You don’t need that. But  … but in all seriousness. The person …. This is one man, Peter Lenkov, who manages to do it time and time again. It’s kind of extraordinary. I’ve yelled at him a lot over the years. We’ve had our to’s and fro’s, but we … you know I… I hold you in great respect …. and it’s really a question for Peter, I think.

Kevin: You see how he tossed that off on you?

Peter: Blown away that he managed to throw the next question back to me.

Alex: I’ve just baffled everyone with nonsense and just put it back on you.

Talking about the computer table scenes:

Alex: These sort of technical bits… It is actually really an interesting question, because, it kind of like ties into not my actors trying no to bump into the furniture, remarks.

This [showing typing with 2 fingers] I can’t do it. I’m like. Peter, don’t write me dude … this … Because I am like [typing with the two fingers again]

I don’t know if it is a male brain thing? I’m like a mouth breather at that service table. But Ian and Meaghan come in and they are like … [imitating how the type on the computer table]

Alex: Let me tell you guys something about Beulah. And this is amazing. He’s my brother. I love him forever. He’s in my life forever now. [clapping] Oh, by the way…. and Meaghan. I’m just taking over the panel, but I’m just following Jay’s lead. Fuck it. Put your questions down.

Kevin: Handle it, handle it.

Alex: These two came onto the show. [To Peter] Can I do this? I this line of thing …. is it alright?

Alex: These two came onto the show and they had to fill two sets of big shoes, you know. And they’re extraordinary people. But this is the thing, Beulah sometimes …

Beulah: A lot of times.

“Oh fuck, accent American”. Why are you listening to that? And I’m like, “That’s not the line B”.  And he does this [point finger at his face] and he yells at himself.

Beulah: I try to psych myself up.

Alex: He does this and just, “Shut up, just do it”.  I ‘like [look surprised] …and then he is amazing afterwards. So, If you guys see any outtakes and we’re doing like that…

Talking about the difficulty of following in Jack Lord’s footsteps:

Alex: I was just saying earlier. For me, it was intimidating, because there was this other guy, who’s not around anymore, Jack Lord, who played McGarrett and he’s been, he did … [clapping] and he’s been… There is a statue of this dude, man,  at the mall down the street from my house. A statue! There’s a bust.

Meaghan: Oh, we can’t wait for your bust …

Jay: He still gets leid … to this day.

Like I break the character down,  and just not watch any of the old stuff. And that’s sort of how I did it. And I had to find my keys. ‘Cos as an actor I look for a key that will sort of unlock, a way, into, … you know, into someone else. And the SEAL thing, was the thing for me.

CBS has always been very supportive of me, even when we started. We started this show at Coronado, you know. Where the boys do their training … their BUD’s training stuff. I became a part of  ….

Alex: That’s a lot of TV man. That makes me. I get … feel sad. Why would I feel sad about it right now? Why do I want to weep? That’s so much TV got to television. I’m like “It is so overwhelming.  We’ve got to stop“. It’s too much.

Peter: And we’re halfway there, so it’s perfect

Questions from the audience:

Fan (Gina): How many pairs of cargo pants do you have in your wardrobe? In your personal wardrobe.

Alex:  My personal wardrobe? I don’t wear anything when I’m done. When I knock off. When it’s done.

Fan (Gina): All the storylines you’ve had, all these the years. Has there been a specific storyline, that has been your favourite to play?

Alex: Thank you for your questions. I can’t remember any episode at this moment.

I got a really … I got to really … I’ve started directing the last couple of years. And I really enjoy it.  And I feel like I should quit acting and focus on that. ‘Cos that feels more comfortable for me.

Alex: I swear to God, I’m not fishing. I am so … over, acting. But I think … one of my favourite storylines was the one I directed in the 9th season, which is a big Junior episode. And I just .. like what Peter was saying, you know I really love the storylines that honour the culture, in relation to your last question.

Because I’m deeply indebted to the Islands. I’m never leaving. Like, I love it there. My little kids are …. I have 3 sons, as some of you may know. And my little ones are Hawaiian. They have Hawaiian names. And I have a Hawaiian name. We’re all blessed in. It’s like a big part of our life. And we sing grace in Hawaiian every night. I’m in so in .. and anything to do with that, is … I’m always excited about that.

But the human stories …. that is like the reason started ….. I don’t know about you guys. But I started … I went to drama school and stuff because  I love story. I’m interested in people. And so, when I like, get to dig into that stuff … The action I’m not doing that any more. I told Peter. I was like dude, “It’s all broken. You fucking tell the stunt team do everything. I’ll just say the words”. But, yeah, you know. The human stuff. It’s good, I like that…

Alex: Negotiation on this  [showing money] … Change the playing field ….

Peter: The chances of that happening, are probably not ….

Alex: Maybe I want to drive the Ferarri, here and there …

Thank you to Paula for spending so much time to get the video done!

(This next part of the dialogue is not in the video, but we wanted to add the text in here)

Alex: I don’t think the H50 team is that well-adjusted. Not right of the bat. It took us a while to get there.

Kevin. It took you guys a while to get there, didn’t it ….. No! You guys were, you got it right of the bat. [To Alex] And you are the show really.

Kevin: As this universe go.

Alex: Did you not hear the cog in the wheel shit I did?

Ian: No Al doesn’t give himself credit. Listening to his answer. You know. He’s, you know, very humble. He comes to work with a dedication, preparation, ”cos he wants the show to the best it can be. You do that for 9 years in a row.

Alex: See that’s how you get people to say nice stuff. 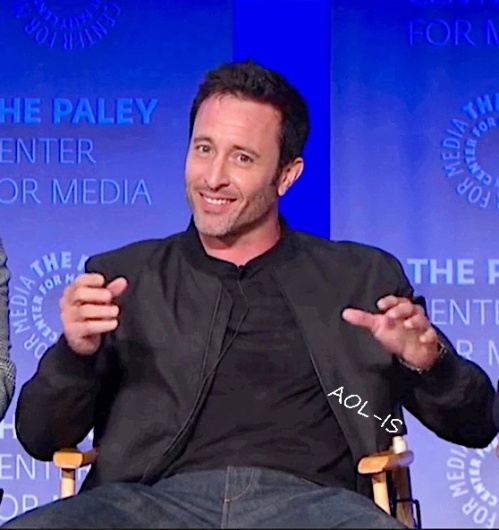 (We also added this part of the dialogue, that is not in the video)

And now Beulah he’s like an honorary member .. of that … of the fringes of that incredible community of servicemen. And .. I want to say men and woman, but there are not many female SEAL’s that … I’ve haven’t met one. So I have to say, men. But it’s not …

Kevin: Peter will write one in.

Alex: There’s a lot of pressure .. to sort of this has been done before. And you can’t think about the success of it. You’ve just got to do your job.

Peter: It’s kind of terrifying. If you think about it And I don’t think we realized, what a legacy Jack Lord left behind on the Island. And …You know, I’ve seen the tide turn. ‘Cos when we got there, it was Jack Lord, Jack Lord .. and I really feel like I’ve seen people really embrace Alex, as McGarrett. And that tide has turned. He is McGarrett.  I think that … as far as you know this generation … I think that’s younger ones who are seeing it for the first time, he is McGarrett. I think for the generation that’s seen the original show, I think they’ve really come into the tent, have embraced him as McGarrett as well. I don’t know how you do it, because when you go to that island the whole the sort of presents…. It’s everywhere. Like he said there is a bust. But it’s everywhere. You go into any gift shop, there is, Jack Lord this, Jack Lord that. And I’ve seen that tide turn where the logos change. It’s become us ….It’s Alex and … [clapping] and, you know, I think that’s a high wire act. And he’s done it so well for, you know, 217 episodes in. And like Ian said. He comes in every day like it’s the first day …. he comes in every day like it’s the pilot, so.