Over the past six weeks, since we started posting all things related to Hawaii Five-0 ending, the comment sections on our social media posts on Twitter, Facebook and Instagram, became inundated with 100’s and 1000’s of people showing their love and support for the show. Most never belonged to the so-called fandom or any faction of ships. They just loved the show for what it is! Many annoyingly sometimes beg for it to continue and we understand it. But most of you will know we felt it was a good time to end.

Having said that, we do realize that with the end, many lost their contracts for work. But that is unfortunately also a harsh reality of this kind of industry – you work from season to season and from contact to contract. We know that, that was always at the forefront of Alex’s choices about continuing with the show. And we would think that his choice to step away, never came easy.

Mahalo to the whole cast and crew for your hard work all these years. We hope that you were as greatly rewarded doing it, as we were watching it.

We also realise that the show was the highlight of many viewers and that many on social media formed friendships around it. In fact, it is also how our beautiful friendship here at Intense Study started. I think many of the pleading and the pain from fans, was also greatly reflected in Danny’s pain and pleading for Steve not to leave.

Unfortunately, over the past weeks, I also allowed myself to see too much (especially on twitter), which I have had blocked for several years now. And a lot of it stole my Aloha. I started this post as a lash out to that, but stepped away for a bit and decided, I will much rather focus on what I love, than to respond to the hate that other shower over us.

But yes, this is another post about the final scene of Hawaii Five-0!

On a question, Peter responded with this beautiful tweet (which also, unfortunately, got distorted with much hate 😥 ).

But we regard it as a beautiful tribute to Alex and his ability to bring Peter’s thoughts from the page to screen. I guess we will often use it in future.

Alex did a great job. Never phoned it in over 10 years. Last scene was beautiful. Nuanced. Last few frames you see him smile. That should satisfy anyone who watched that character for 10 years. That emotion says it all. My H50 story is told.

Peter also told us all here to move on. And that is great advice. NO number if vile comments or interpretation or anything else of it, will change of what was produced by Peter and what was there to see.

Okay, so Peter wrote the final scene. Alex and Michelle acted it (over many takes and angles). Peter edited it to leave us with the scenes he liked and felt told his story the best. And we all watched it. But of course, we all saw it, how we wanted to see it, I guess?

I think leaving Steve and the things she’s done to perhaps hurt him weren’t by choice. She has always loved him, and he’s always loved her and always felt complete with her. For me, those two being together was always the endgame.

The idea of Steve and Danny on those chairs, looking out at the ocean, was always in the cards as well. That friendship will always be there, those two guys will grow old together.

But the idea of Steve having a family for himself, being a grandfather, being all the things that his father and grandfather was, that was always in the cards for him.

Ah, so that was what Peter meant with the final scene? He saw Cath and Steve starting a life together again. And he felt that Alex did a great nuanced version of that. #GoodToRemember

As so often Peter’s thoughts during the show were reflected in what Danny said over the years:

Look, I have no idea what he was like before I met him, but I can tell you now, that he is the best version of himself when you are around.

Just a weird side note here:

Although it might not seem so, by what I post – I am actually not a McRoll shipper. 😕 Have since the beginning, been a McKono shipper and my final scene would always have been this. …..

So of course, this boat sunk LONG ago when Adam came, but I always held hope that Kono would drop his gangster ass and be with her one true love, Steve. But alas, then the actress left the show and all hope was lost #MyShipSank 😦

But enough said about that. I want to get back to the final scene and what we saw.

I know there will be loads of different views. I even chimed in with a weird and sometimes crazy one, in the post of Unspoken Words

Before we move on, what was Peter aiming for again?

Well, truthfully, I think the show is going to end every year. So every year you have to think about that. But I felt like the ending that you saw could have worked as a season finale or a series finale. Everything was built to see Steve McGarrett leave the island, and if we were going to come back, he would have come back in Season 11 after a couple episodes. I always thought that the season would end this way, and then when it became a series-ender I went in and retooled some things so it felt like a real, genuine end.

Steve is alone and on his way. He thinks about Danny and the rest of his Ohana that he is leaving behind. He loves them, but for his own sanity he needs to step away for a while.

He looks shocked, surprised and confused. He can’t believe it is Cath.

The One That Got Away is actually right there in front of him. Why? 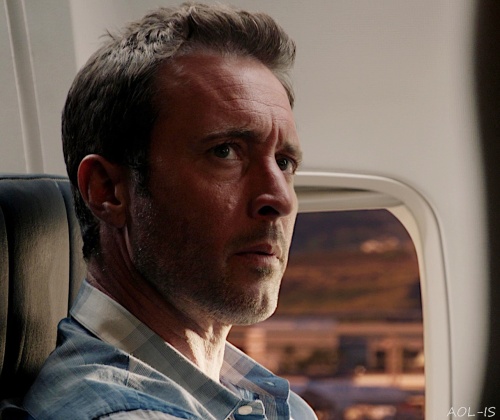 Steve kind of embarrassingly smiles for his own behaviour towards Danny for ever letting him drive.

Steve looks uneasy and nervous. They are great friends and he trusts her with his life (as we last saw in Epi 9:11) But will they be able to make a fresh start as lovers again after all these years apart? 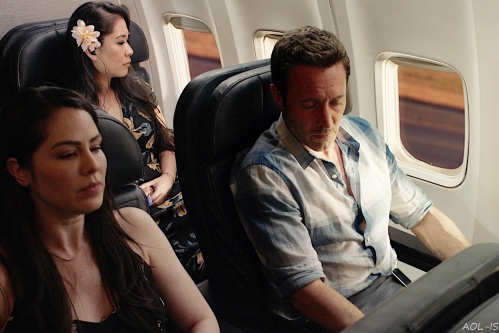 He looks into her eyes and he gently licks his lips. 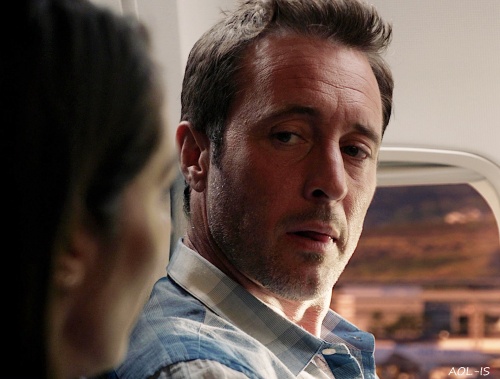 She knows him well and with a yes and a nod he confirms his readiness to leave home and move forward with her. You can see Steve thinks seriously about it. It is no laughing matter. He needs to step away for a while and discover himself again.

And he is doing it now, with the person that knows him the best. The one who knew him even before he landed here 10 years ago. The only one he ever really let in. (He said so  to Harry in Epi 7:02)

He asks to take her hand, and with it to reaffirm his words. They once again connect with a firm touch. She told him before she left that Five-0 was his THING who always kept him busy, but that she wanted more. Now that he is stepping away from that constant need from others, they can maybe try to really be there only for each other – maybe for the first time. The world is their Oyster! 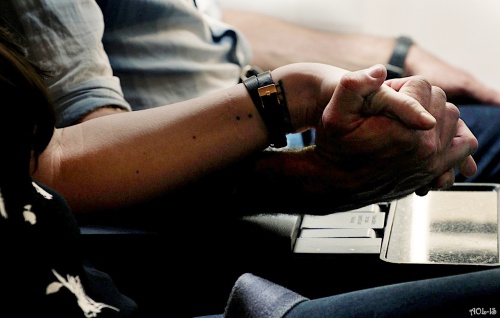 And with a radiant smile, Steve can feel the heavy burden of the Ghosts of the Dearly Departed, starting to lift.

(or maybe he smiles, because he remembered that he packed the ring before he left 😉 😛 )

He is content, but he will miss his Ohana, Eddie &  Danny, here in his beloved Hawaii. But he will be back, refreshed and ready for the next round that life deals him. He is Steve McGarrett after all. The one with a plan, even if it does not look like it.

He looks slightly serious once again, but that deep frown is gone.

I find the light shining here on him, as he says Aloha to his precious Hawaii, inspired.

And like so many times before, Alex took the words from Peter’s pages and with subtlety and finesse, he took this very serious but also liberating moment in Steve’s Story and gave us a beautiful sincere goodbye.

(Without trying to smile like an idiot the whole time)

There is still a long road ahead to find his peace and complete his quest. Steve came full circle (as Alex said) and he is leaving again as he came. Taking along the only person he had left, who was still alive, from those that he had as a constant in his life, before he came. The one that was not broken and did not need fixing when they met – way back in their 20’s. The strong one, who also needed time during the past few years to find her place.

(And I feel confident that one of their first stops will be with Mary and Joanie. After all, Cath made that promise to Aunt Deb)

Here is our tribute to Steve’s journey of pain and desire to leave.

You are a class act!

A person is allowed to have many different loved ones in life. There is a place for friends, brothers and lovers ….. and children.

To be honest, an “anything but” viewpoint in life, for me, presents no Aloha.

This is the last I will say about this final scene …. I promise ….

I’m not speaking for Al, but his wishes were to make a great finale.

We tried our best.

Sorry (if) you’re not satisfied.

If it wasn’t free, I guess I’d give your money back.

You entertained us all!