The Steve McGarrett Story – No # 108 (Is Steve Bulletproof?)

Okay, before I start with my story, I need to write my usual “H5-0 disclaimer” or whatever one would call it – The flow of the episode was very good and entertaining. Everybody from the cast a crew did their part to get the job done and solve the case to let the good guys win. Just another feel good Hawaii Five-0 episode. Some procedural weekly fun and entertainment for us to enjoy. In other words, no matter what I say about the episode after this, it was still a good piece of entertainment for its genre. 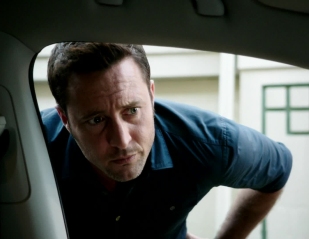 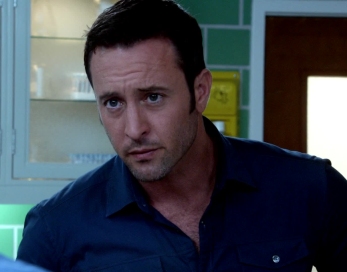 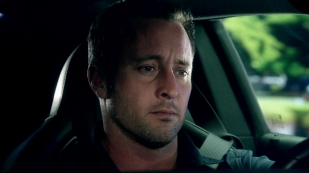 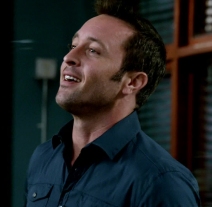 And now for Steve’s story………

Not sure what it all means and what all the subtext is supposed to be or say, but I got the feeling they are trying to tell us that Steve is bulletproof.

Are you made of lead paint
A bulletproof Picasso
All the virgin saints
Put you here to care for me
I don’t need a reason ……..

(I kind of got the feeling that it was a real Alex reaction of pleasure (or pain), when he smelled the coffee)

However… it’s important to keep in mind that everything in nutrition depends on dosage and context.

Just because a little bit of something is healthy, it doesn’t mean that a whole ton of it is healthier, or even safe.

This brings us to the topic at hand… a huge trend called Bulletproof coffee.

If you don’t know what this is, then it is a recipe for a coffee drink that replaces breakfast: 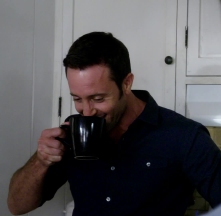 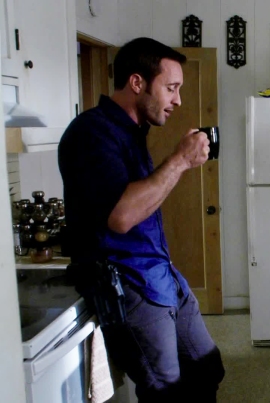 (Is it Steve grinning (or Alex nearly laughing) here. Maybe Alex thinking that with all his boys at home, and Scott having a baby girl, that he (Scott) is the one that will have the bigger worries in a few years time 😆 )

(I just want to thank  Steve  for showing us how easy it is to rip that Kevlar of him – I will surely remember that whenever I get the opportunity to undress him. 😛 ) 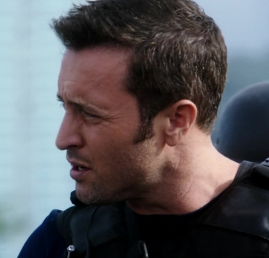 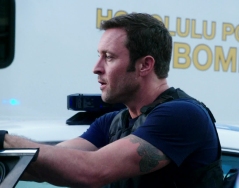 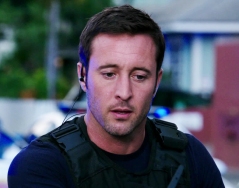 Another disclaimer before I continue with my rant:

I love the fact that they made Kono the team’s marksman. Although it needs training, hours of practice and skill to be a sharpshooter, there is also an inherent talent for it. Something that someone can learn at a very young age, if exposed to using guns, like I guess she would have been growing up on the islands where people hunt. And remember she is also part of a “police force” family and most probably started shooting at a very young age.

But lets’ continue with this weeks episode……..

Chin: Not to many people in this world can make that shot the way that you can. The question is, why is he still breathing?

Kono: Cause a bullet to the head would have been way to easy for him.

My reaction to it, is that no mere mortal can make that shot in any case. Not unless you are able to shoot around corners. Why am I saying that? Well, Makoni is facing Steve and is leaning forward to the passenger side of the car, with his left arm pointing the gun towards Steve. Then Kono shoots him from a higher point more from the front and through the window at his back (from the driver side). From there a bullet would have hit him from the back or side of his shoulder. But surely not from the front….. 😕

(And also as I sidenote – from Kono’s vantage point, the heads of the people in the car were not really fully visible, making a headshot kind of impossible)

(Also strange that we do not see blood or a tear in the shirt directly after the shot. And look closely after the shot the girl moves back to her seat and is now suddenly strapped in with her seatbelt again – oopsie)

….. Yet when we see Makoni’s wound, later on outside the car, we see that he was shot from the front (with blood only on the front of his shirt).

The only way he could have been shot and wounded like that from the front, while his scene with Steve played out as they showed it, was if Kono was shooting at ground level from a point behind Steve.

I will keep my thoughts about the shirt to myself, but I will just mention a quote from Alex himself from an interview we posted last week:

I came here for the first time during the Pilot. And it was a huge amount of information to take in. And I was staying at a big hotel, full of tourists. And kind of loud people wearing bad shirts.

(Yes I am nit-picking, because I was bored and needed to do something while waiting for Steve’s story to progress, somewhere someday in a future episode. 😀 )

Don’t get me wrong, I love the Ohana moments and the team doing some normal stuff together. They just don’t always make sense to me, and that makes it feels forced to me.

Hope you had some ‘nit-picking’ –fun with me (sorry I just had too). Luckily Paula’s pictures of Steve is always pretty – he never disappoints. 🙂