This interview was done in September 2011, the week before SOTB 2 and while filming Episode 2:06

Brooke: ‘The Insider‘ is exclusive on the set, where Hawaii Five-0 has taken over this mansion for a high-octane home invasion scene. 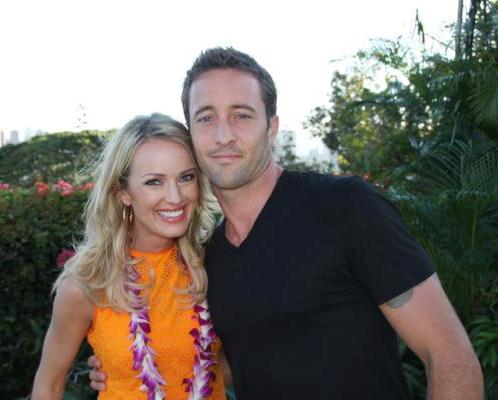 Brooke: How fun is it to run around with the gun and the holster and to get to do things like that?

Alex: It’s pretty…… I really enjoy it. I mean they’re props essentially at the end of the day, but they’re kind of fun props. And they make big sounds; you know… it’s kind of. It’s real boy stuff, you know.

Brooke: And do what you will.

Alex: And try to just pretend like it’s real …. And so we do.

Brooke: Takes you back to your childhood in a way, huh?

Brooke: What happened to your shoulder? You do some of your own stunts and you got beat up?

Alex: Yeah, the thing is I’m sort of …. I’m not as hard as Steve McGarrett. You know, I’m a little softer. I play a really tough guy and it hurts, daily.

Brooke: Standing pretty close to you, you’re not soft.

Alex: [Smelling under his arm] Oh I thought you were ……

Brooke: No you said you’re softer than McGarrett. You don’t look soft.

Alex: He’s a pretty tough guy though. He does like all this, you know, jumps out of everything. And so I go, “Yeah I can do that.” And on the other side like ouch.

Brook: Why did I do that?

(On this clip, you will see that she interviewed the other cast members as well )