When The Shield returns next season, there will be a new face amongst the Strike Team, as Alex O’Loughlin joins the cast as Kevin Hiatt. Australian actor O’Loughlin appeared in the Marvel Comics adaptation Man-Thing and has a role in Blade: Trinity director David S. Goyer’s upcoming film The Invisible, but The Shield will mark his most high profile role yet.

Recently I paid a visit to the set of The Shield and had a chance to talk with O’Loughlin about his exciting new role. Before our talk, I saw the actor standing in “Video Village,” where the crew members viewed a scene being filmed, while O’Loughlin took turns switching off with Chiklis (who was also directing the episode) playing a bass guitar a crew member had loaned them. With production underway, it was understandably hard for O’Loughlin to set aside much time to talk, and the very friendly actor at one point had to be called away to film midway through our conversation, only to then very graciously take some time out of his lunch break in order to finish our chat. Though he was careful to not give away too much of the show’s upcoming storylines, O’Loughlin discussed his character and what it’s like to join such a dynamic show. 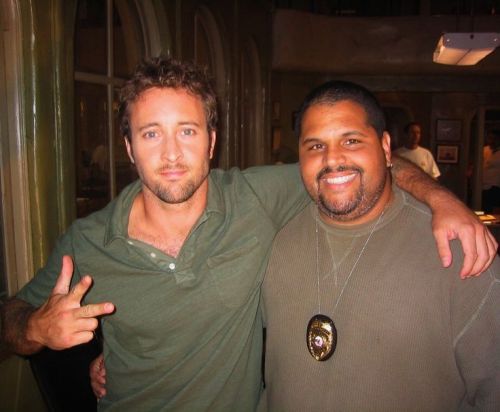 IGN TV: How many weeks have you been working on the show now?

Alex: It’s going good. It’s a really scary transition. I’ve never worked on something like this. It’s tough! It’s like there’s film acting, there’s TV acting and then there’s The Shield. That’s kind of how I describe it.

IGN TV: Can you describe your character?

IGN TV: What’s his relationship like with Vic? How do they get along?

Alex: They’re getting there! [laughs] They’re getting there. It’s pretty interesting putting Kevin and Vic together. I mean Kevin’s a lot younger than Vic and he’s the new bloke, but he’s also been brought in at the same level. So it’s kind of like putting two panthers in the same cage and watching them just circle, you know? We’re still — even what we’re shooting now — where these two characters are working each other out. But they seem to be getting along okay.

IGN TV: What about the other guys in the Strike Team; Ronnie and Shane? Especially Shane, given what he did last season. How is he acting around the new guy?

IGN TV: Who brings you in? Is it Kavanaugh?

Alex: Claudette brings Kevin in; to keep an eye on Vic and sort of relay information to what’s really going on in within the Strike Team at the moment. And also as a potential replacement.

IGN TV: So how’s it been working with the cast and crew?

Alex: It’s been awesome. Look, this ensemble has been together for five years, and they’re so tight and they know each other so well. And it’s always difficult moving into something like that as the new guy. But this has been kind of good for my character; I mean I felt a little bit like a fish out of water. I mean it moves so fast, even though it shoots like a movie. It shoots like little movies; like lots of little feature films, but it moves really really really quickly and you get one-hundredth of the rehearsal time.

You’ve got to have your s**t going on and you’ve got to be ready. And I never feel like I’m ready most of the time! [laughs] But we’re getting along! We’re getting there. I’ve been doing a lot of reading and spending a lot of time with the LAPD guys. I’ve been doing that and going out shooting lots of guns and sort of rolling with these cops and just talking to them and just doing as much research stuff as I can.

IGN TV: Were you very familiar with the show when you got the part?

IGN TV: A lot of the subject matter and the cases on the show are pretty dark and horrific. Have you dealt with any of that stuff yet?

Alex: Yeah. We’re actually dealing with these particular Salvadoran murders at the moment that are pretty nasty.
[Editors Note: At this point as we were talking, Michael Chiklis happened to walk right by and glance over at us]

IGN TV: And with him in earshot, how is Michael Chiklis to work with as a director?

Alex: [Smiling at Chiklis] Michael Chiklis is a beautiful man! He’s very intense, and he’s kind of frightening from time to time. But when you get to know him, he’s like a teddy bear.

IGN TV: Is it interesting for you to go from working with him for a couple of weeks as an actor and now to see him also as a director?

Alex: Yeah, it’s great. I mean Michael’s character is so sort of the pinnacle of the show. The show pivots around his character I think. So it’s almost not so strange to see him as the director, you know what I mean? It is kind of like, “Wait, hang on… what are you doing sitting in that seat?” But he’s a fantastic director. It seems to come really naturally to him and it’s great working with him. Working as an actor and also working with him as a director.

IGN TV: So have you gotten any hints yet from the writers as to whether your character is going to show his own dark side or stay on the straight and narrow.

Alex: Yeah… Even if they had told me, I couldn’t tell you, you know?

IGN TV: [Laughs] Well, rephrasing a bit; What do you think would be more fun to play for your character? 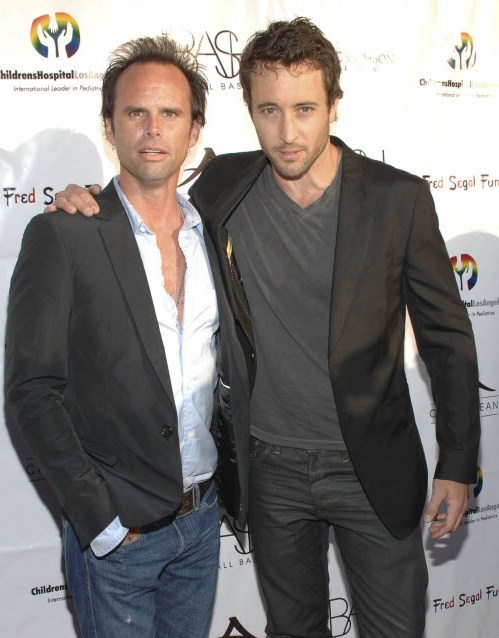 “The Bash” was a benefit for the Los Angeles Children’s Hospital on 17 May 2009 in LA. The event was held at the legendary restaurant Crustacean Beverly Hills. Here is a report from it:

Michael Chiklis ( The Shield ) isn’t new to eco-consciousness. “I’ve always been aware. My uncle owned and operated the first solar plant in Massachusetts. He was on the cover of Mother Jones magazine in the 1970s,” he told MNN at The Bash charity event to benefit teen patients at Children’s Hospital Los Angeles. Chiklis, who doesn’t have solar panels at home but is conscientious about conserving water, recycling, turning off lights and covering his pool to retain heat, was at the event to support his daughter Autumn, a Bash board member. “I raised both my children to be philanthropists, to give back,” he said. He’ll be seen next year as the principal in the “stoner comedy” High School.
The Bash is the brainchild of teens Nathalia Ramos ( Bratz ) and Bosilika An, who decided to help fellow teens after a sobering visit to the hospital in December. “There were all these toys for the little kids but nothing for the teenagers,” said Ramos, who got her teenage friends involved, (and in turn, parents like Chiklis, David Hasselhoff and Scott Baio). The event raised money to “pimp out” the hospital’s teen lounge with video games and music plus donated computers, and more bashes are planned, “We want to inspire people to make a difference,” added Ramos, a soon-to-be USC freshman who’s also “a huge environmentalist.” Always scolding friends not to litter, she’s diligent about turning off lights and water, and not wasting toilet paper.
Also in attendance were Alex O’Loughlin ( Moonlight ), who’ll star in the CBS fall medical drama Three Rivers and play Jennifer Lopez’s love interest in The Back-Up Plan, and  High School Musical’s Monique Coleman, who’s writing an advice book called From Ramen Noodles to the Red Carpet: A Guide to Becoming Who You Are Without Forgetting Who You Were. Both do their best to live green. In addition to recycling and conserving water, O’Loughlin rides his motorcycle whenever he can. “I just try to be conscientious. I try to be resourceful and frugal with what I use,” he told MNN. “There are a lot of little simple things you can do,” noted Coleman, who recently bought an organic-fiber couch.
********

Did the short stint for Alex on The Shield really mean anything for his career? Taking into account that the episodes he featured in, were filmed in 2006 and only aired a year later in 2007, I think it was best for his career, that his time on the show ended so quickly. Being part of that production might have taught him a lot for his future in USA Television, but staying with the show, might have been a road to nowhere for him……..

In the interview he talks about the lead actor ( Michael Chiklis) also directing the episode. I wonder if Alex would ever venture into that the directors chair of an episode of Hawaii Five-0……..? As far as I can remember he did mention some thoughts about that, in an old interview before Hawaii Five-0. Wonder if it is still something he might consider doing? 🙂