This is the transcript of Alex’s interview on the Season 10 DVD.

A Special Big Thank You! to Marcela, one of our fellow fans, who provided us with this transcript. It helped a lot, because I did not have the time to do it myself this time around.

That is what makes fangirling great – when we can all share in the fun!

A decision like this is not a decision that is easy to make when you’re as invested as I am. And I know that the audience and the fans are deeply invested, for which I’m incredibly grateful. Because without you guys, I don’t have a job.

That investment comes at a cost. And it’s been a really, very difficult decision to make. But I was so invested and I cared so deeply about keeping this show on the air and keeping everyone employed and … and making it work, that I just figured, like, I’m going to do whatever I have to do. 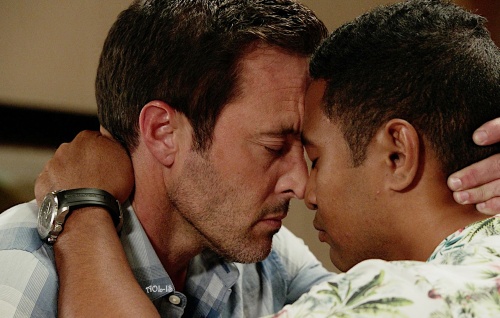 I… I don’t really know how to do this job half-heartedly. I don’t know how to phone it in. I don’t want to … know how to cheat, or just pose my way through it. Anyone in this business knows this kind of gig is a little more steady … steadier than… than most. But it’s always… there’s always that … the footing is always precarious, you know?

And I was just thinking to myself, “How much longer is this show is going to go for?”… and then I started thinking about … sort of just the big moments for me … for McGarrett over the years. This recurring thought kept coming to me that I was… I just sort of had this dissatisfaction, I suppose, this… sort of slight anxiety with the fact that we hadn’t really dealt with McGarrett’s mom, you know. The Doris McGarrett character. And then I got into, like… the little tantrum in my head, like, “Why would they do?” Like… “I can’t… why hasn’t that been a priority?”! And almost immediately, that sort of grown up in the room in my head. You know, the head of the committee up here, was like, “Why don’t you do something about it?”

And so I started thinking and I started thinking, like, “What? What could that be?” And that turned into the … like a creative dreaming space. And over the next couple of days, I started… it always comes to me late at night when I’m working on something like… whatever a creative idea is, it’s just like… I sort of design my house, that I built. And all of it happens between like 12 and 3 a.m. Which is extremely inconvenient because… Malia is like… “Turn the light off. You’re a psycho”. But I’m writing all these notes down. And in the end, I sort of had this pitch that seemed like it made some sort of sense in this world.

And then I called Peter and I said to him… “Hey, listen, can I… can I have five minutes of your time?” He was like, “Yeah, sure”. And I pitched it to him. And at the end, he was like, “I love it. Do you want to write it?”. And I was like, “Wow! I’m not really a writer”. Like, I’ve written some things that were horrible. That never got made. But … and he was like, “Just give it a go”. And he was… He was so supportive. He was so supportive. And… for the most part during the process, he… he left me alone. Like he never… He never treated me like a boss, or like, you know, he was… he was… he was so respectful. And … the notes that he gave me, were suggestions. And they were all really helpful. All really good notes … really helpful. And as it turned out, I probably implemented like eight out of ten of them, you know. And they were …. they made it better.

And in the very first draft, I killed her. And I think the network… if I remember correctly, they read it. And they were like, “This is great… That’s not… that’s a little dark when… you can’t do that… We can’t do that.” So, but, yeah, I sort of… There had to be… for me anyway… There had to be a finite ending. Like there had to be… you know, because we live in this… we live in this make-believe world, which is so much fun. It brings so much joy to everyone. And that’s, you know, we love the catharsis of turning on the telly and …. and soaking it all up. But to be a part of it. Even as an audience member, I think sometimes …. even with the broadest fantasy, we needed to sort of like drop into reality a little bit here and there. So… so we can anchor… the story that provides the catharsis for us to aspects of our own lives. 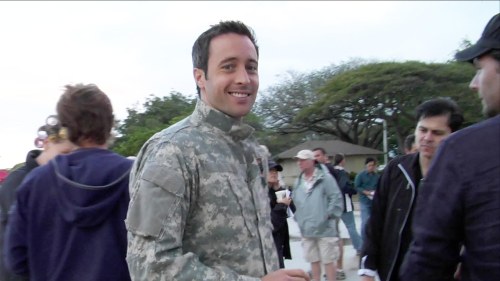 The other thing I really wanted that episode to represent, was my gratitude to Leonard’s legacy and what Peter Lenkov’s done with it and everyone’s acceptance of me being the guy. You know, it’s weird because, from the very beginning, I was like, “These are big shoes to fill.” It’s been intimidating to me from day one, you know. And I had to sort of approach it in my own way, to be able to make it my own and… and… and bring it into today.

But that scene that I wrote when McGarrett decides to share that moment with Junior about the dream. Like I was writing it even on the day when we were going to shoot it, I was like, “I don’t know if this is any good”. Like, it feels a little on the nose…

Steve: “I’ve been having this dream. Every night I wake up and she’s sitting on the edge of the bed, she’s reading to me like when I was a kid, you know”.

It’s my life. Like I’ve always had really crazy, vivid dreams. And I have really cryptic dreams. Like, that’s like a dream I would have. And my mother is reading to me as an adult. And I’m like, this is weird and why… But I can’t hear her and I can’t, you know, that running in mud sort of thing. And I just wanted to give… I mean, the Moby Dick reference, is probably a little on the nose and obvious. But I just wanted to give McGarrett a little bit of me and also just… Sort of like, I don’t know, let… let everybody into the… the constant, obsessive, unrelenting connection that he has with his mother, that he just needs… needs … needs closure on.

Doris: “Whatever you think. Stop thinking it. Yes, my mission went sideways, but I swear to you, I’m staying dark for the right reasons. Your life will be compromised in a way that I can’t help you, Steve. If you don’t leave this country immediately”.

Steve: “My life was compromised the day you walked out of it”.

Like she’s a flawed character. And that was… I had the grace of that, going in, you know. So it gave me freedom in the storytelling, you know, and… from the very beginning, she was flawed. She faked her own death. She kind of like… bailed on her family. On her kids for the sake of, you know, her … for the sake of the government. In the end, she was like, “How do I make this right?”

Doris: “You don’t get it, Steve. I got nothing to show for all my years in the agency. Nothing. A whole life of fear and… and guilt, for what? For what? I lost my identity”.

Agent: “She stayed on target till the end. She did her job”

Joe: “I’m sorry Steve!… I couldn’t be prouder of the man you’ve become”.

Doris: “I love you so much”

Joe: “You continue to go down this road, son. You’ve got to ask yourself, how many more lives is that going to cost?”

The huge part of my life, that no matter where my life or my career takes me from here, this is always going to be a home for me. I have no intention of leaving… the island. Despite the fact that I’m leaving the show.

I love raising my kids here. I love being a part of the… the Kamaʻāina. Being part of the people here. And… I was sort of a blow in for a while. But at 10 years, you kind of get to like… You can have a discount on the orange juice. And I’ve been here long enough, you know. And so it’s… it’s a very, very special place.

The episodes that I have seen the way we shoot this island. It’s extraordinary. All you’ve got to do is point a camera at whatever and it’s like, “Wow!” We’re so blessed to have the production value insofar as the cinematography with the natural vegetation, the incredible mountains, and the waterfalls and everything else that we have here. I think you sort of can take that for granted sometimes. But it to me, it’s always played such a massive role in the show. You know, I like she is like… this ‘aina is… the true lead role of the show, you know. I mean, it wouldn’t be a little different than Southern California, you know, it would be it’s just… There’s nothing like it.

But as far as… being a part of this place and the people from Hawaii, I’ve never really felt as welcome as I did here.

I really wanted to get 10 years. I didn’t want to walk away before then. It just didn’t feel right. And I think I got to a place now… and it’s not of frustration or fatigue. I mean, I’ve been fatigued. We’re all fatigued. But it wasn’t as a result of that. It was just… I just got to a place, a really quiet place. And a calm place, where I realized, like… I’ve done it. I’ve done 10 years. I’ve cared as deeply as I can. I’ve brought what I possibly could, to the table. And I hope that it’s been enough. And now I need to focus on those little men, you know. Those two little men at my place. I’m just glad to have .. have been a part of this like … a part of history. And I’m gonna miss it. I’m gonna miss it like crazy.

16 responses to “#AlexOLoughlin and His Final #H50 Interview (Transcript)”