Back in December 2016, on the 75th anniversary of the attack on Pearl Habor (on 7 December 1941), some of the remaining survivors of the attack and survivors from the battle ship, Arizona, that was sunk on that day, made the trip to Hawaii again.

On 9 December 2016, Hawaii Five-0 Episode 7:16 was being filmed at a hotel, and they were given a ringside seat to the action. Alex and Scott had the honour of having a chance to meet them and take pictures with them.

At the time of the meeting, Donald Stratton was 94 years and his wife Velma was 90 years. Ray Chavez was 104 years and Ken Potts was 95 Years old, and his wife Doris was also there.

Donald G Stratton
Donald meeting actor Alex O’Loughlin on the set of Hawaii 5-0.
Alex stopped what he was doing, and came over to meet Donald.
The two had an incredible conversation.
Alex’s character [Steve McGarrett] on Hawaii 5-0 had a grandfather who was aboard the Arizona who perished. 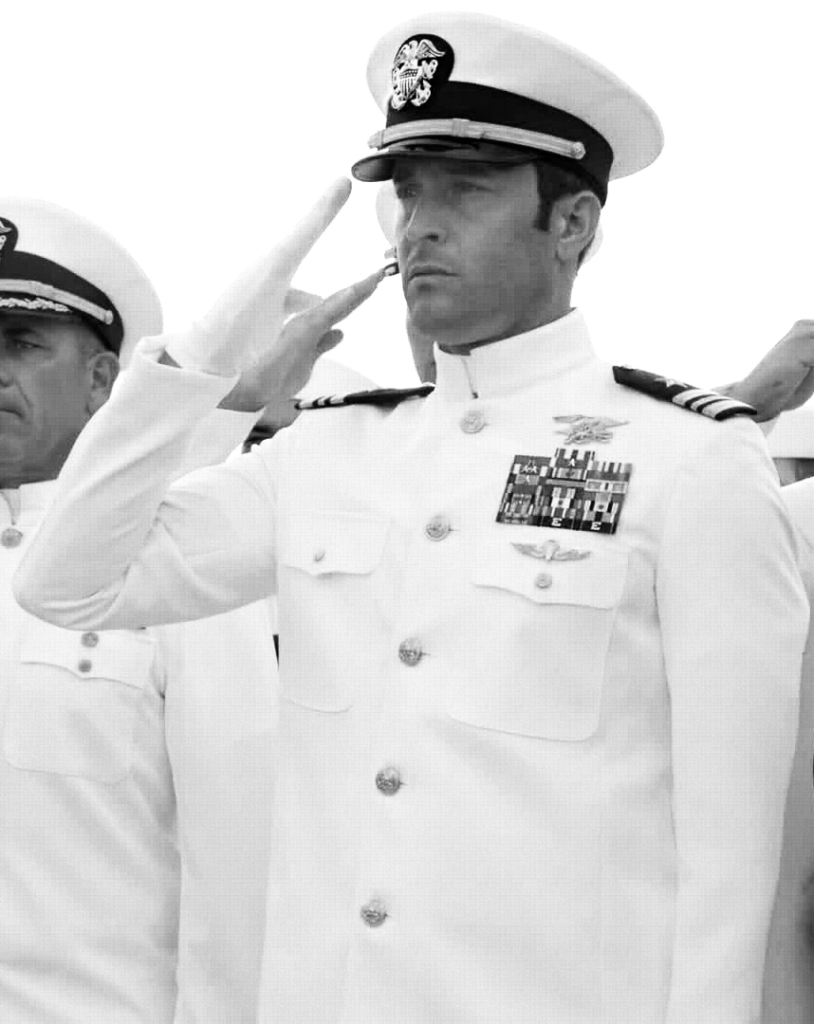 We originally wrote about this visit in our weekly news post of the time back in Dec 2016, but I thought it might be a good idea to revisit it and do a transcript of the video from Paolo Cascio.

There is a lot of background noise and others with non-relating conversations that can be heard, but we tried to catch just the main part of the interaction with Alex and the veterans.

Alex: (answering somebody that we could not hear)

Some people aren’t. Trust me.

Randy: That is my dad, Don Stratton.

[We’re on the set of Hawaii five-0. They are at a hotel, shooting.]

Alex: [Posing for pictures] Let’s do another shake.

Thank you. It’s an honour. Gentlemen, it’s an honour to meet you guys. Thank you very much for taking pictures with me.

Donald: [It sounds like he said] Well, you do it fairly good as well.

Alex: Well, I haven’t really done much. I just show up and shook some hands. It’s a pleasure.

[Posing for another picture]

(to Ken) I’m going to give you a left hand. Is that okay?

Alex: Did we get them?

Alex: Yes, it’s a pleasure. I hope you guys enjoy the rest of your day.

Alex: You can all stick around as long as you want.

Randy: Appreciate it. I have to get them back up. We have a 9 o’çlock flight tonight. So …

Alex: Oh, you can all get a nap in and stuff before the flight. Yeah, yeah. Good on you mate, alright. Take it easy.

[Again shaking hands with the vets]

Nice to meet you gentleman. It was a real honour.

Yeah, yeah, yeah. Thanks for coming by and for saying hello.

Donald: Don’t do anything you can do standing up in a hammock …..

Randy: His book. “All the Gallant Me”, number one best seller right now.

Alex: I got to hear this (and he leans in to hear Donald better)

Donald: [Saying something to Alex something that sounds like.] Don’t do anything you can’t do standing up in a hammock, and you’ll be fine.

[Shaking hands Velma & then Doris] Nice to meet you.

Link to our video edit

stratticusx
Grandpa meeting Alex O’Loughlin on the set of Hawaii 5-0! So awesome.

stratticusx
No big deal. Just the cast of Hawaii 5-0 stopping for a picture with my grandpa USS Arizona survivor Donald Stratton. #h50 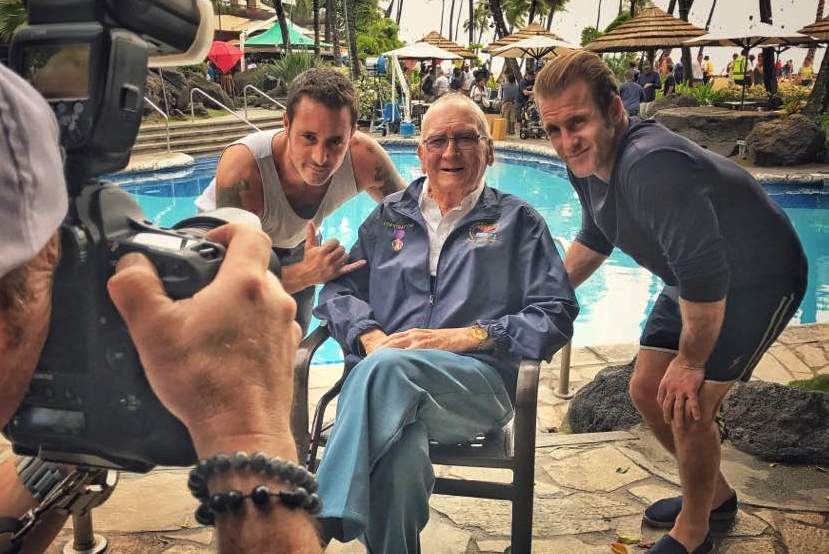 Here is Ken with Hawaii 5-0 actor Alec O’Loughlin during the 75th anniversary of Pearl Harbor. 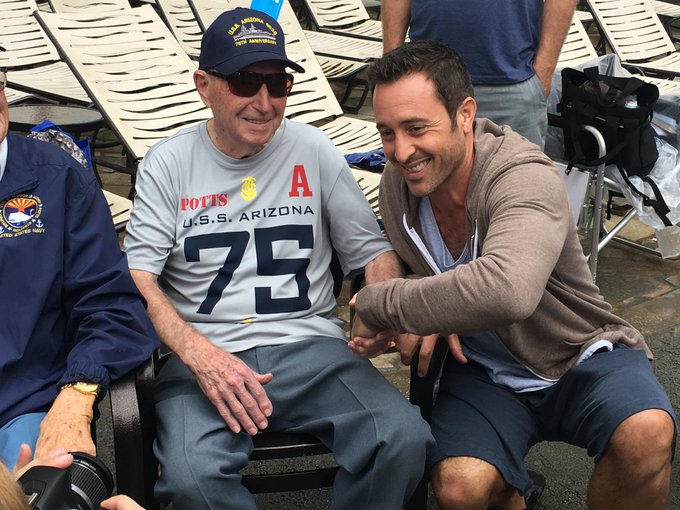 But who were these veterans that Alex met that day?

He was the oldest veteran survivor of the attack on Pearl Harbor. Ray died peacefully in his sleep in San Diego County on 21 November 2018. He was 106 at the time of his passing.

His book written by Ken Gire is called “All the Gallant Men: The First Memoirs by a USS Arizona Survivor” and is a New York Times and Amazon best seller and set to be made into a movie soon.

He turned 101 this year and is at present one of the last two survivors of the sunken ship, Arizona.

In Dec 2017 they again visited Hawaii for the 76th anniversary of Pearl Habor, and it looks like that time around Alex got a copy of the book from Donald’s son Randy:

Sharing All the Gallant Men with Alex O’Loughlin from Hawaii 5-0!

It was interesting to see how these men, who were all in their 90s and 100s already, kept a good sense of humour over the years.

They survived so much, but they also lived long lives!

We’ll miss the definition of his pectorals, but Alex O’Loughlin is right: The fitted scrubs in the pilot of his new CBS organ donor drama Three Rivers(premieres Oct. 4) did make it look like an episode of Star Trek.

In the video interview below, shot at his photo shoot for EW’s Fall TV Preview issue (on newsstands now), the Aussie also talks about the downfall of Moonlight:

“We had a very, very difficult time. We had like four or five different showrunners, and people were quitting and getting sick, and producers were like fighting with each other. I don’t know what was going on, but there was a lot of behind-the-scenes politics…. There was a lot of drama, and it’s not supposed to be about that drama — it’s supposed to be about the drama on the screen.”

Let’s hope the decision to ditch those fitted scrubs was unanimous.

EW: Why did you decide to go with a medical drama?

Alex: It was the best script I’ve read. You know, I read a bunch of scripts. It just happened to be a medical drama in which the story was fantastic. And I think the thing was .. at first I sort of was going to say no,  because I just didn’t feel like I could pull it off. It’s a really important story.

And my character Andy Yablonski is based on a real person, Gonzo Gonzales. He is this amazing guy and surgeon in Cleveland. You know, he saves like four people a day. It was quite daunting. And it wasn’t until I met Gonzo, and got to know him, and started sort of studying with him, and researching, and learning with him. And then he told me that  I absolutely have to play the role.

I spend about 30 hours in the operation room and I’ve seen lots of different procedures. Lots of different open-heart surgeries. I’m always studying. You’ll find me at work, at home, I’ve got like textbooks open. It’s like I’m back at university. It’s crazy. There’s so much to learn, just in relation to what I have to say, let alone everything else. But I find it really interesting, so that’s easy.

Alex: No, they changed them. Thank God.

That was one of my problems with the pilot, was that we all … it looked like an episode of Star Trek from back in the 70s you know.

But … but no, they’ve changed. They are more like scrubby … normal scrubs …

EW: Were you surprised about the fan outcry after Moonlight was canceled?

Alex: Genre fans are renowned for their passion and enthusiasm and dedication and sort of voice, which I really love, you know. That’s what I really love about my fans, you know.

I never really think that anything I do is that special, or affect anybody THAT much. And so, I was surprised. But it is great.

EW: You guys were a little ahead of the curve with the vampire craze.

Alex: I think we were a little ahead of the curve. And I think  …. but …. you know, I think it’s just our show. We had a very very difficult time. We had like 4 or 5 different showrunners. And people were quitting and getting sick. And producers were like fighting with each other. I don’t know what was going on? But it was a lot of behind-the-scenes politics …

Alex: Yeah, it was a lot of drama. And it is not supposed to be about THAT drama.

It is supposed to be about the drama on the screen. And so, it was just a difficult piece to keep together.

You can see gifs from the video here:

#AlexOLoughlin Modelling for EW Photoshoot Back in 2009

While doing one of our daily blog re-posts on Twitter & Facebook last week, I realised that there was a quote in one of them for which we never posted the full original article before.

Best known for his roles in The Shield and Moonlight, Alex – who lives with fellow Aussie expat Holly Valance in Hollywood – has taken on the film world, too.

A rock’n’roll musician meets a beautiful cellist at a party, and their one fateful night together results in a child who’s later put up for adoption.

Ten years later, their son is something of a  musical prodigy and, escaping the orphanage, he decides to use his talents to track down his parents.

TV Week: What’s your role in the film, August Rush?

Alex: Jonathan Rhys Meyers plays an Irish rocker who meets Kerri Russell’s character, Lyla, at a party. I play his brother – we’re both guitarists in a band.

But, when he loses Lyla, he leaves the band. Time goes by, and I’m the one who persuades him – well, I give him a smack in the head – to bring that music back to life.

TV Week: You work alongside Robin Williams in this film – are your days as a struggling actor over now?

Alex: Not necessarily. When you go from Australia to America, you go back to zero. The reality is every day of your life is spent chasing work and flying around the world, refinancing your own career, and it’s been a long slog.

TV Week: You seem at ease, playing the guitar in this movie …

Alex: Yes. It’s been a hobby my whole life – and I don’t profess to be good at it, but I enjoy it very much. I got to play my own guitar in the movie.

TV Week: Your girlfriend, Holly Valance, is a singer and actress. Do you guys have a musical household?

Alex: I like to tinker. I have lots of guitars and I’m always making a racket. Holly’s very private with her music. She’s incredible and very supportive and likes my music, which is great.  I’m happy to have someone in my life who puts up with it.

TV Week: So we won’t be hearing your debut album any time soon?

Alex: Absolutely not. I was never good enough, maybe because I never practised enough.

But that’s just a dream – I’m like the frustrated frontman who just happened to become an actor!

TV Week: What’s next for you?

Alex: I’m busy with Moonlight, and I can’t really sign on for anything else until we know where we stand [with the writers’ strike].

I’ll stay on board with the show until they cut my leash, which they hopefully won’t do! 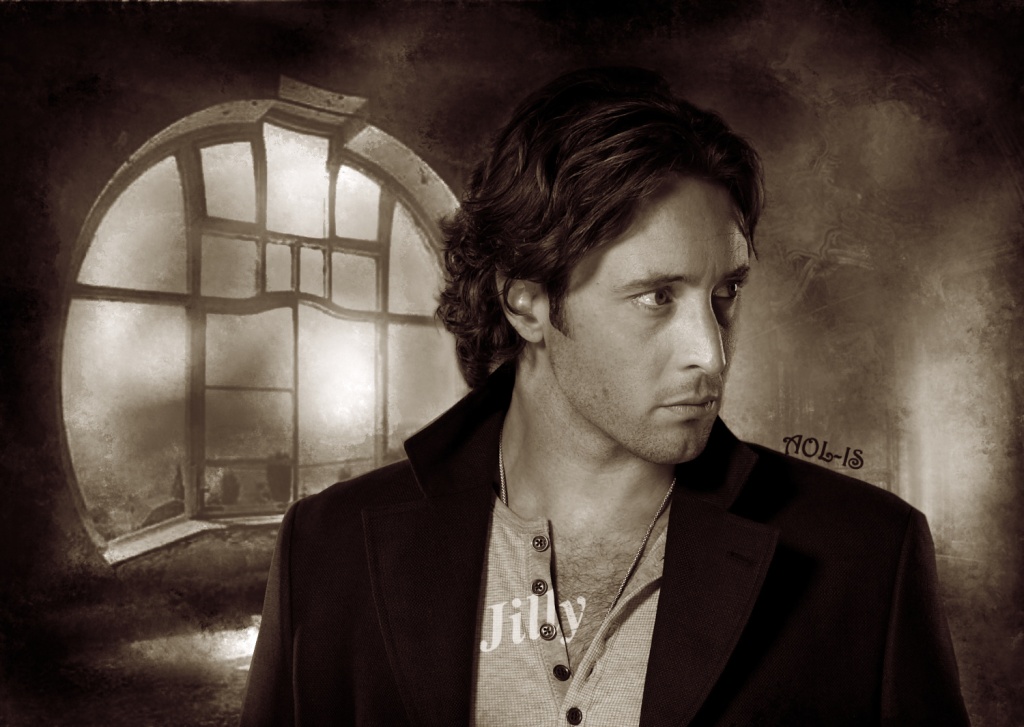 Short video of a deleted scene from August Rush: