These were Joan’s IG posts at the time: 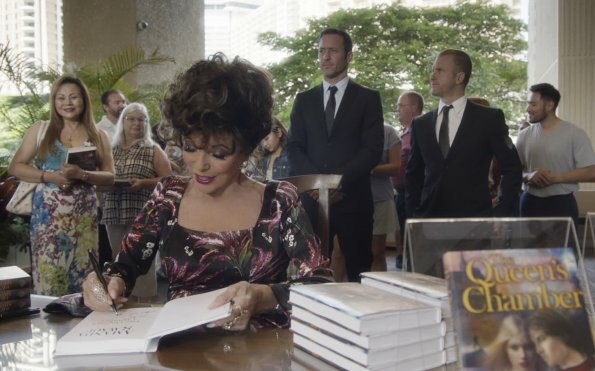 “We met years ago in Monte Carlo at a TV festival,” he recalls. “I promised I’d bring her to Hawaii.”

When the script called for an actress to play glamorous romance novelist Amanda Savage — who has unfinished business with her former son-in-law, Det. Danny Williams (Scott Caan) — Lenkov kept his word and gave the Dynasty veteran a call.

Collins (above, with Alex O’Loughlin as Steve McGarrett) fills us in on the rest.

Were you familiar with Hawaii Five-0 before this part came along?

Joan Collins: Yes, I’ve seen the show and I love it. I’m bored to tears with [hospital-drama] operations and people leaning over a cadaver, and too much shooting and sexual content and bad language. I consider Hawaii Five-0a pretty wholesome show.

What’s the one thing a role has to have for you to say yes?

Joan Collins: It has to be interesting and something I feel I can inhabit. I loved doing American Horror Story: Apocalypsesince I played two characters! And I made a great friend in Kathy Bates.

Tell us about Amanda. Does she get along with Danny?

Joan Collins: No, they don’t like each other. [Laughs]

But she likes Steve McGarrett.

[According to Lenkov, “She sees McGarrett as a potential fifth husband. Or is it sixth?”

The boys take me shopping, and we all end up bantering. I’m pretty good at banter.

Your character comes to town on a book tour. Since you’ve written both fiction and nonfiction, and your late sister, Jackie, was a prolific novelist, did that provide some inspiration?

Joan Collins: Yes, we have a scene where I’m at a book signing with Amanda’s fans applauding and saying, “We loved your last book, and we can’t wait to read this one!” It was a little bit like it has been when I’ve been writing books.

And now you’re touring England with Joan Collins Unscripted, your one-woman show. Why is this the right time for that?

It’s not the right time, believe me! I was supposed to do it in September, but I was doing American Horror Story, so I had to postpone. I shall be dashing back to a warmer climate as soon as possible! 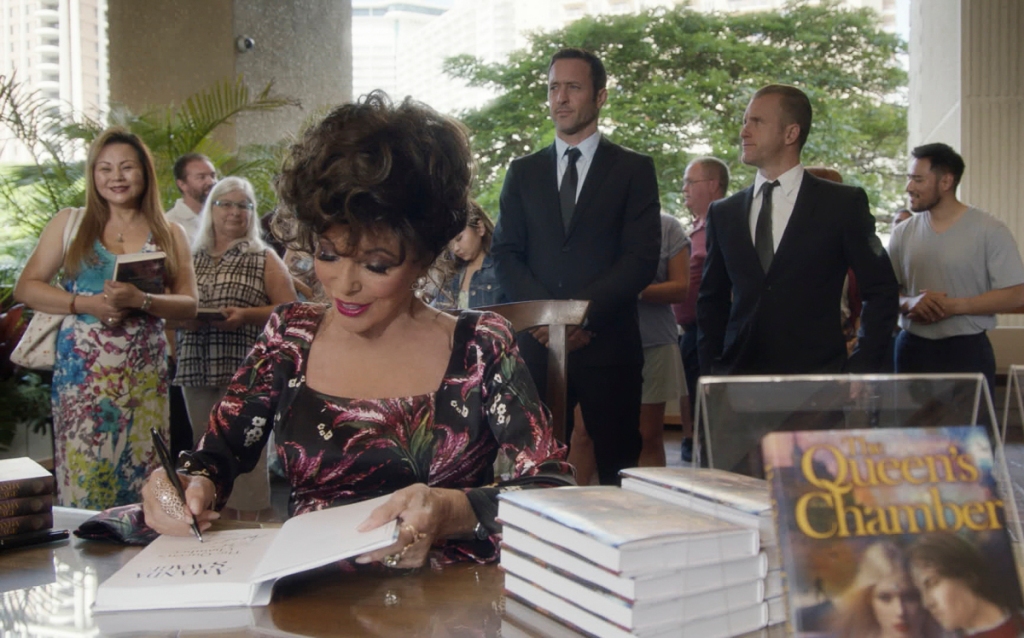 Some of you might recall the  little story we  did on Joan’s late sister, Jackie Collins …

The tall good looking one on ‘Hawaii Five–0′ ….. #AlexOLoughlin

and her thoughts about Alex.

Jackie tweeted in 2012: “Alex O’Loughlin, one of the sexiest guys on TV. Agreed ladies??”