Some years ago we posted an article that covers most of what is said in this video, but it is always great to actually see the actors on stage, doing their thing.

We do not know who took this video, or who it belonged to. I found it saved in my old files and could no longer find the original copy online.

According to the iF Magazine article, which we posted a long time ago, the panel was moderated by  Anthony C. Ferrante

Jason: Yes, I think it’s been addressed in the next episode coming up.

Alex: It is the next one.

Alex: You see, I don’t remember what we’re shooting from one day to the next.

Jason: Yeah, he works like 20 ….. just unbelievable, twenty-hour days. It’s unbelievable. Both of these guys. I work 5 hour days, so …

Question: How many episodes do you have left for the rest of the season? There’s 2 or 3?

Jason: We just wrapped yesterday. And yeah, we have 3 more episodes to show.

Questions: Okay, so what are we going to see on the next three episodes, in terms of this evolution and what is going on? Are there more standalones, or will there be more mythology driven?

Alex: Well, they are more standalones, because you have to understand that logistics we haven’t been given a second season pick-up. And so like, until .. as filmmakers, you know as television .. makers of television series and that kind of thing [mumbling].

Okay…. ah … no … we … we cannot afford to start something that we are not going to be able to finish. It just wouldn’t …. like, we’re not prepared to do that, you know. And so until they give us that that pick-up, we can’t really do any arcs and we can’t ….. you know. So, we’ve had to do four pretty much standalone episodes. But they are really good standalone episodes.

And there is, the arc that is … will always be there is .. is the … is the arc between Mick and Beth. And so that sort of .. that comes to an interesting close .. and you know, that moving forward in 16.

Question: They’ve killed off a lot of your … your close people, on the show, Sophia. Yeah, and then again, the …. going really quickly – I think by Episode 3, you’re totally accepting that he’s a vampire. It seems like a tricky thing, you know. Having to take this person who is kind hard news and kind of logical person, and then have to be thrust into this world. It must be an interesting dance as an actress. As how much you can accept and how much … kind of … have to … how weird this is?

Sophia: I think, you know for Beth – she’s fallen in love with his soul. And the fact that he’s a vampire is, you know, secondary to her. And …. I actually think that he gets his contacts and his fangs – I always find him more sexy in that looks. So.. it works for me

Alex: Yes, she always makes passes at me once I am coming out of make-up. 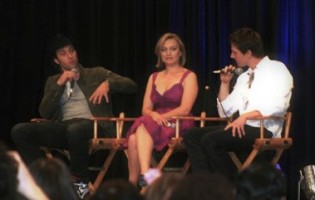 (We think these pictures were taken by somebody named Wendie.)

Question: This is for any …. any one of you. One of the things …. I’m curious, my favourite episodes is the mythology driven stuff and it’s the vampire’s stuff.

Question: And again throughout the 12th episodes, the ‘Mortal Coil’, or whatever the title of that one was, right before this one …

It was … There was a lot of the procedural stuff. And I know CBS loves the procedurals. You, know, they like to have that handle on the things.

But I think the genre fans, and I’m sure you guys agree, you know, that the  driven mythology and stuff that makes these shows work. So I’m curious, what …. which do you think works best for the show, in your own opinion? And what are some of your favourite episodes?

Jason: I want to say, real quick, that I think Alex kind of introduced the idea of the bloodlines, and that sort of thing. Which I think is some of the most interesting stuff in the story. You will see more of that coming up,  we’ve kind of have like, in the last episode, we have like a vampire conference.

And we kind of get together … and there’s a problem that comes up, that kind of threatens the survival of the vampires. And they kind of all deal with it in their different ways. In their different levels in the social spectrum, or whatever. And so you’ll see some interesting stuff coming up on that.

But I like the vampire stuff, when it gets into that. But your so good with the procedural stuff and I think that’s a good blue line for the show. But every time we get away to the bloodlines and that sort of thing, I think it’s very interesting.

Sophia: We’ll I get … I have the new boss, but she leaves, because Buzzwire is very tabloidy and that kind TMZ thing, and Beth is not interested in any of that sort of stuff. So, she’s more interested in the hard-hitting journalism. And she gets on to a new job quite soon. So, yeah….

Questions: Very cool. I want to take questions from the audience now. So. …

Some of the fan pictures taken on the day.

Unfortunately, we do not know who any of them are.

Fangoria’s Weekend of Horrors – May 2008

And an interesting fan story of the day:

#AlexOLoughlin – A Moment in Time

2 responses to “#AlexOLoughlin, Sophia and Jason at Fangoria – April 2008 (Transcript)”