Happy Anniversary to Alex and Malia!

We wish you the best for the next phase in your life together!

“I have fallen for a beautiful Hawaiian woman.

I’m a very lucky guy and very happy at the moment.

GQ Man of the Year Awards, 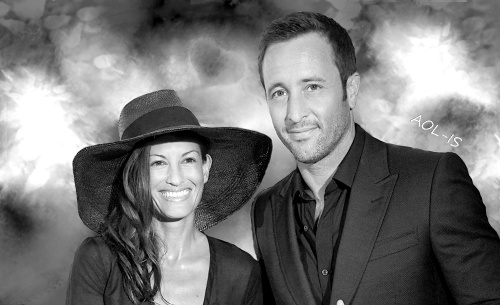 Every year we get the same question about the anniversary date of Alex and Malia’s wedding, and every year we try to explain why we say it is on the 17th and not on the 18th. This year we decided to make a post about it –  to also use as a reference, every time we get a query ever again.

Why are people getting confused about the actual day of Alex and Malia’s wedding? Mainly because two ‘famous’ sites (Wiki & IMDb and with them everybody else),  insist on having the incorrect date listed online, by using the available evidence incorrectly.

Why are we so sure we have the correct date for the wedding? In short – we were here reporting on it as it unfolded back then, and that is why we know. We followed the story live at the time, so to speak.

But I do not expect you to believe just my word for it, without taking all the evidence into considerations. We will give background information and proof of why we insist on the 17th as the correct date. This is what we do here at Intense Study – we leave no picture or article unstudied, until we get an honest and accurate answer. 😀

The events as we experienced it back then.

Most importantly of all, you need to remember that the world is round and that our time and date, will be different from your time and date (and Hawaii). For instance, we live on the other side of the world from Hawaii, and our blog time differs exactly 12 hours from the time in Hawaii. So midday for us on our blog timestamp, will be midnight for Hawaii. Easy enough to understand I presume?

The 1st piece of evidence:

On 17 April that year, at our time, Miss Hawaii 2012, posted two pictures of herself and Alex on her Instagram page. Unfortunately, her account is private now and she also deleted the posts at some stage.

It was interesting news at the time, but it was also the first piece of the puzzle. Later on, we realized that it must have been something like a rehearsal dinner for the family. We have no confirmation of what it was – so remember this is just our assumption, as part of the events.

The 2nd piece of evidence:

Early the next morning a post came through on Morimoto’s Instagram page, with the news that the restaurant will be closed for a private function on that day – the 17th. And with the post, was a picture of ceremonial drums, with Alex & Malia’s names written on it. People from Hawaii confirmed that those sort of drums would normally be used in a wedding ceremony.

Screenshot we made that day.

(Please click on the picture to read the details  better) 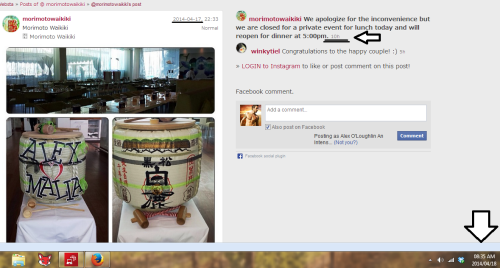 To recap: This means that at 10h30 on the 17th, Morimoto’s announced that on that day they will be closed for lunch for a private function – with the picture indicating that is was for Alex & Malia.

By that time we started to realise that it must be Alex and Malia’s wedding reception that was happening there that day. Unfortunately, most of those messages were deleted, but at least we took screenshots of it, as evidence.

The 3rd piece of evidence:

Later that day, on the 18th, we saw the official announcement in the USA media. A post from People Magazine. This is the only official and therefore the most important source for the wedding announcement – but also the start of the confusion, if interpreted incorrectly.

But the most important evidence here, is the timestamp on it  – it was posted at 04:35 PM (or 16h35). And this time it at which it was posted, is what is needed to get to the truth. 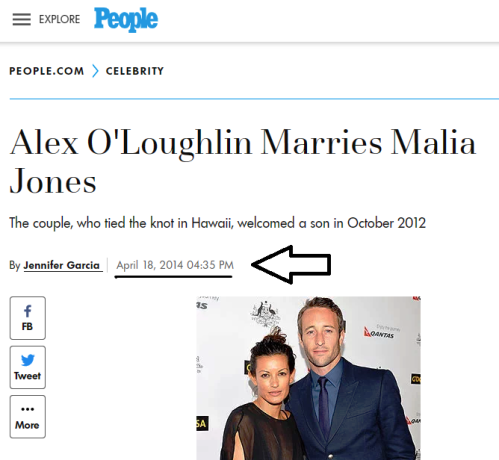 Unfortunately, that original post does not give the date of the marriage – it just says recently. But because the date on the article is the 18th, others took that date as THE date of the wedding. Not taking into account that the report was maybe made on what happened the day before.

Remember greater USA is about 3 – 5 hours ahead of Hawaii time, so most of the time they would report about Hawaii news, only the next day.

From what I could see, most articles in the People Magazine are posted on New York time. If so, it would, therefore, mean that it was only 10h35 in Honolulu on the 18th, when that article was posted. And it is not realistic to say that they reported on something of that day already by that time. Just think of it. How early should the wedding have been, to get everything done and get confirmation from the rep and then to report on it by 10h35 already? 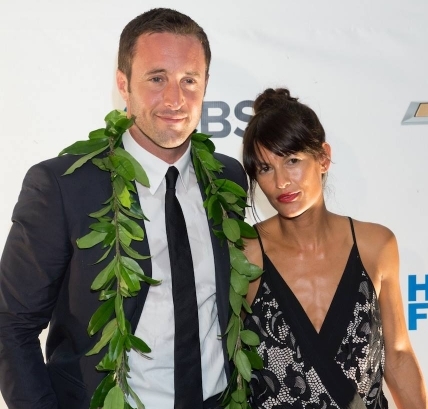 The 4th piece of evidence:

When we saw that article in People Magazine, we got the official confirmation of the event and we quickly added the link in our own post that we made for the announcement. We published it at 22h59 our time on the 18th. 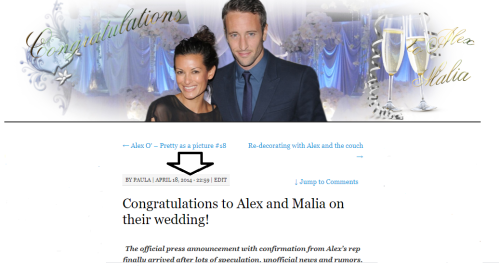 Here is the link to our post on that day:

Congratulations to Alex and Malia on their wedding!

So by now the date  & time on the two articles, plus Morimoto’s post, should all be enough evidence that the date of the wedding was in fact, the 17th.

The 5th piece of evidence:

Of course, we saved the best for last. Evidence from another independent source, of someone who attended the wedding. That evidence is still available for anybody to see. One of Alex’s friends, in the entertainment industry, posted a lovely Instagram post, with the sunrise, early on the morning of the 18th at around 06h00.

“Beautiful morning after the most incredible wedding… Best of everything to Alex & Malia!

So on the morning of the 18th, he talks about the wedding of the previous day (unless they got married during the night of course 😕  ) – and that means the  wedding was on the 17th

There are of course other Instagram posts as evidence as well. They are also from people who attended the wedding , but we do not want to include them here, because are more personal and private. Some of those include messages on the 17th, of people mentioning that the wedding is happening on that day etc.

But on top of all the evidence, we want to  add one more aspect:

Let’s take a closer look at those specific days back in 2014:

Of course, Good Friday is a Christian holiday observed by members of many Christian denominations, with church services. It is a  legal holiday in many places around the world, including most Western countries and 12 U.S. states (including Hawaii)

Why is this important to know? Because, 18 April in 2014, in Hawaii, would be a public holiday, then. With many clergyman and other officials busy with their Easter celebration and not readily available to officiate any weddings. So regardless of your religion, with the day being an official holiday, whoever can perform such a ceremony will either be on leave that day, or busy at their church.

This got a bit long, but to explain it one more time again, let’s do a recap in case you got confused.

So let us recap again: 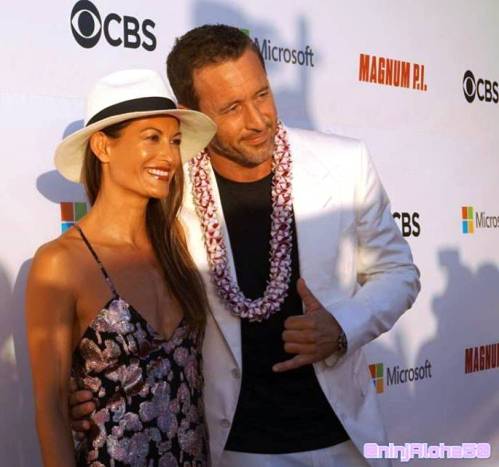 I hope all these factors will settle the issue once and for all of why we know that 17 April 2014, is the correct date of Alex and Malia’s wedding ceremony! 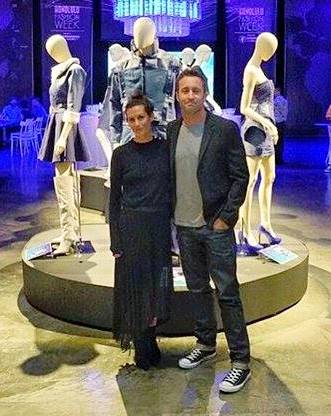 Alex’s latest words about his wife and kids…. and H50

Talking about it makes it so surreal.

Like it’s profound, what this show has meant to me on so many levels.

It’s hard to talk about.