They say …. #AlexOLoughlin is a fine actor.

Of course as Alex O’Loughlin fangirls we can not pass up on this opportunity to repost these wonderful comments from Movie and TV veteran actor, the 89-year-old, James Hong ……

James is a guest actor on tonight’s episode (8:23) of Hawaii Five-0 and he also appeared as different characters in a number of episodes from the original Hawaii Five-o

James Hong Thanks or your encouraging comments as my Hawaii 5-0 episode releases this Friday. Alex O’Loughlin is one of the nicest leading men I’ve ever met. I don’t think he allows stardom to change his inner person. To Alex: “Thank you for your hospitality and your fine acting.” 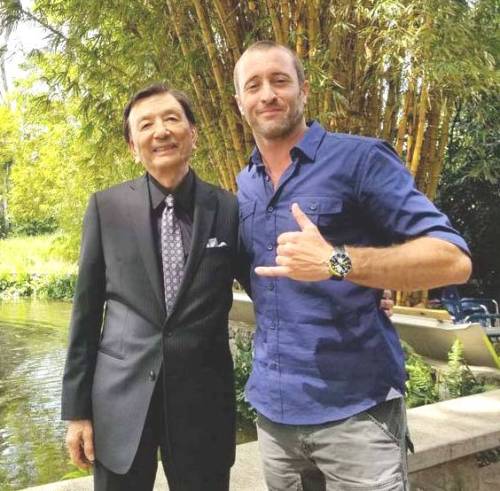 Such heartwarming comments by someone who has been around in the industry for so many years and worked with such a vast number of actors over the years …….
James joined Facebook last year, and just to explain a bit better of who he is as a person, we added this comment he made on his page earlier.

(  13 September 2017)   Wow! Thanks for your support of my official Facebook and Twitter Pages. I’m really happy to hear you have enjoyed my work of over the last 60 years. I can hardly believe it myself – over 500 TV and film roles (IMDB doesn’t list them all). Knowing my job as an entertainer, artist, is making a difference in people’s lives means a lot to me. Thank you. Stay tuned, because there’s still more to come!