#AlexOLoughlin is adding another title to his all-encompassing #H50 resume.

Another great interview with Alex – March 2018.

We think that he gives a lot of good answers to some of the questions and assumptions that have been hanging around the fandom this week. And there are not really any biased assumptions and statements by the interviewer – only clear answers by Alex. Although I guess many would find some sort of way to twist it again to suit their gripes ….. 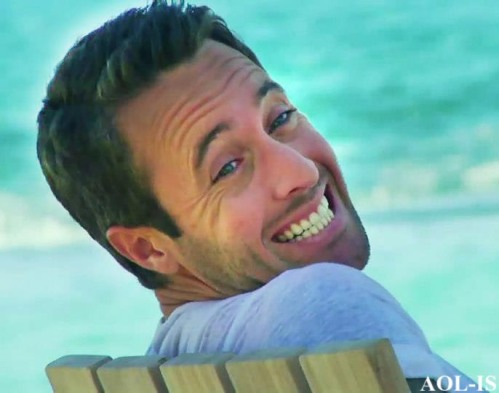 The 41-year-old star, who has valiantly led the Five-0 team as Steve McGarrett, makes his directorial debut with Friday’s season eight episode of the CBS action drama, stepping behind the camera for the first time in his career.

In the installment, titled “E Ho’Oko Kuleana (To One’s Duty),” the ex-wife of the man who shot Danny (Scott Caan) in an early season eight episode finds her way to Oahu, kicking off a slew of flashbacks to a time when the actions of a younger Danny, living in New Jersey at the time, helped save her life. While Danny’s past comes back to roost, Tani (Meaghan Rath) and Junior (Beulah Koale) patrol the island, providing levity to an action-packed hour, and Adam (Ian Anthony Dale) is framed for the murder of the crime boss he’s been hot on the heels of.

Ahead of the episode’s premiere, ET jumped on the phone with O’Loughlin for a candid conversation about his directorial debut, why he’s backtracking on comments he made about his desire to step away from Hawaii Five-0 after the current season and the “trickiest” part about directing himself.

ET: Friday’s episode of Hawaii Five-0 marks the first time you’ll be credited as a director in your career. How would you describe the experience stepping behind the camera versus being in front of it?

Alex: It was super exciting. It was very different in the sense that when I’m in front of [the cameras], I try to make all the cameras disappear and all the strange people holding things around me just go away. That suspension of disbelief that’s required as an actor to live truthfully in imaginary circumstances is different to what needs to happen as a director, in the sense that you are the master of all the moving parts. You create the world in every detail. But it was thrilling. It was fantastic. It’s something I really hope I can do more of in my life because I enjoyed it very much.

ET: You’ve been working in the industry for a while. Why did now feel like the right time for you to take the directing plunge?

Alex: I think my career is still a work in progress. There are many things I want to do, so many people I want to work with, so many different opportunities out there as an actor. It’s a really good question. Fundamentally, on this show, it took me years and years and years to get my workload down to a point where I could even conceptualize doing something like directing, because it takes a lot of time and a lot of energy.

I know myself — I don’t do anything half-a**ed — so I think I did a hundred prep hours on this thing, almost like a bit of a psycho; I was a little OCD with it. It was by chance that [the opportunity] came this late on this show. When I started, I don’t think I was ever a good actor — I’m not saying I’m a good actor now, but this show has been a master class in acting. I think I’ve grown as an actor on this show, [and] I wanted to do that first.

ET: What was the most challenging part about directing?

Alex: The trickiest thing for me was dealing with myself, to be totally honest. I didn’t do as much acting preparation as I would’ve liked to or as I always do, so I was a little frustrated as an actor and also as a director. I was sort of racing back and forth from when I’d act a scene and then I’d call “cut” and then I’d race back to the monitor to watch the playback of my work, which I didn’t really care about. I just wanted to get me out of the way so I could focus on all of these great actors I was working with. I was annoyed at and with myself. [Laughs] But everything else was great.

ET: This may be a difficult question for you to answer, but how is Alex the director different from Alex the actor?

Alex: That’s an interesting question. There are some big differences. When I’m working as an actor, I want to be left alone and I have to go inward to get to the work that I’ve done, if that makes sense. But as a director, I’m much more gregarious and running around [on set] — “Hey, I’m so glad we’re doing this!” — fiddling with all the cameras and lights. It’s not that I feel more like a collaborator when I’m directing, but I feel like the collaboration when you work as an actor is more unsaid, it’s more unsuspecting. You are a cog in the machine and you just focus on your part. As a director, you’re focusing on all the cogs and on all the sums of the [whole] part.

ET: You had the opportunity to direct major emotional beats in the episode, as well as a big action sequence and flashbacks with Scott. What was the most difficult for you to execute?

Alex: The action’s second nature to me. I know how to do action and make it action-y. [Laughs] The thing that was most exciting to me was working with actors. Working with [guest stars] Joanna [Christie] and Daniel [Kaemon] was great. To have the permission to climb down into the foxhole with these actors where they live and do all their hard, dirty, emotional work and sit with them quietly and go, “Hey, listen, how do you feel about this? Do you trust me to take this [scene] this way?”

ET: We also see McGarrett playing the guitar early on in the episode, which is a nice nod for fans of the show, and you get to share the scene with Jimmy Buffett. Talk me through filming that moment.

Alex: Oh yeah, that was rad! [Laughs] It’s funny, that Portuguese guitar — I’ve played guitar my whole life, but that was impossible to play. So someone had to come in and string it like a normal guitar because none of us [had experience playing it]. I cheated a little bit and had them restring it so I could play it like a human. That was fun. It was a bizarre, funny little moment to have Jimmy Buffett with his bare feet up in McGarrett’s office. It was nice. For the most part, it’s a pretty dense, serious episode, so those little parts are deeply important relief moments.

ET: In the April 13 episode, McGarrett’s ex, Catherine, comes back into the fray. What can you tease about Michelle Borth’s return?

Alex: It was great to see Michelle and it was cool to pick up where we left off. It’s a great action, travel-y episode with McGarrett and Catherine. It’s also nice to see these two sharing the same space for a minute and to explore how they feel about each other, how everything is cool [between them].

It was weird for a minute, the way she left — somebody who’s about to get proposed to and they choose an allegiance to the government and national security. It was a big blow for McGarrett. I think this episode served as a gentle closure and reinstated the friendship between the two of them, which was really important.

ET: Last time we spoke, you were adamant about Hawaii Five-0 season eight being your last. We’re now approaching the end of the season. Do you still feel the same way about your future on the show?

Alex: I’m opening the door a little bit. A big part of this is that my back injury is doing a lot better after my stem cell treatments. It’s a big deal when you hurt your spine; it’s one thing to get your teeth knocked out or have torn ligaments and tendons, but that injury really scared me.

A couple of years ago, part of my reality was if this stays this way, I can’t [do this anymore]. What are going to do, Ironside? Put me in a wheelchair? That sort of shifted a little bit. It’s the end of a very long season and we’re almost at 200 episodes. It’s tough for me to think about coming back to work right now, but I’m open to negotiations. I haven’t heard much but yeah, I’m open to it.

ET: Could there be a situation where former stars Daniel Dae Kim and Grace Park returned at some point for a final farewell? Has there been any internal talk about that?

Alex: I haven’t listened to any talk about any of that stuff. All I know is they left and we got two new fantastic young actors who want to be here. It’s sort of made a massive difference on the show. We had a long relationship with those other guys and they decided they didn’t want to be here anymore and now we’ve got two people who want to be here. I don’t know what it’s like on the outside and I don’t read all the news either, but from the inside, it’s been a charming adjustment. That’s probably part of why I’m more open to coming back as well. 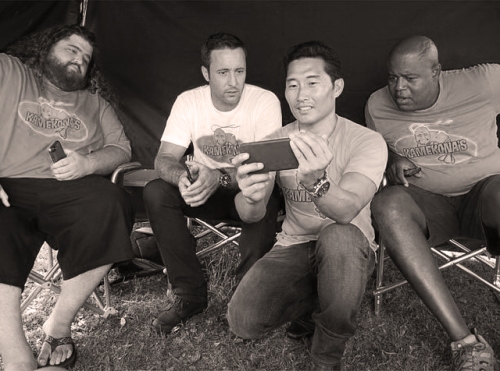 The boys relaxing onset and watching a YouTube video

ET: So you’d be interested in discussions for a potential ninth season? (Note: CBS has yet to renew Hawaii Five-0.)

Alex: I’m way more open than I used to be but again, I don’t know if we’re even close to making a deal so it still might not happen. So we’ll see.

24 responses to “#AlexOLoughlin is adding another title to his all-encompassing #H50 resume.”