I was looking for some pictures and information for one of my posts, when I again noticed this ‘ode’ to Alex that was written by an old friend and a fellow Alex-blogger in 2012. She wrote it for her Tumblr and WordPress site H50BAMF, which later became AOLww.

I realised that it is still as true today as it was back then – even with some added Alex-virtues that we can maybe list. Or rather more evidence over the 6 years since then, that just re-inforced what she mentioned here.

I found that so many of the old stuff are vanishing online because sites closed down or new fans did not know it ever existed and are still there to read. I thought it might be a good idea to repost it here for you all to read …….

Alex is No Tortured Artist

When you’re happy by nature, its contagious.

Every time I see a new rash of interviews or events, I always come away with “feelings”.  You see, for me it’s hard to support someone’s work when I don’t like them as human beings.  Granted, most of us don’t really KNOW these people, but you keep your eyes and ears open enough, you get a pretty good idea of their general worth.  After this whole recent bullshit dust up about him being ungrateful to his fans because of a poorly timed/worded/edited statement, it made me reflect on the actor that I’ve grown to love and appreciate over the past couple years.

This is what I see:

~He doesn’t take himself so seeeeeriously! He’s just an actor. He has a job to do.  He does it with enthusiasm and graciousness and then he goes home.

~He values his private life and the privacy of his loved ones. In this day and age of reality TV stars and social media, that’s increasingly rare. Social media is powerful and it could make him a household name if he played it right. Yet, he values just being “Alex”.

~While he’s charitable and supports several causes, his big cause is his own family.  Too often celebrities spend their time taking care of others while their own family falls apart. Now I’m not saying there is anything wrong at all about doing charity work…celebrities really need to put that face forward.  But it does you no good to try and save the world when you can’t take care of what’s your own.  I like that he gets that.  Don’t spend so much time saving the neighborhood while your own house is on fire.

~He’s self-admittedly not perfect and we all know he took a really big ‘fall’ this year BUT he got up with grace and honor and that’s the most inspiring of all.  The falling down doesn’t matter, it’s the getting back up and fighting that counts. It’s hard to even imagine what he went through before asking for help. He’s always said he was a fighter and he proved he’s as good as his word.  Good for you, Alex.

~He compliments others freely and genuinely, even though he gets little in return. This is really something I admire so greatly and it really hit me watching the S1 H50 DVD.  He really is good at singing the praises of his co-workers, actors, directors, minor actors, set people, etc.

~He can be honest without being ‘brutal’.  There is no weakness in speaking honestly but tactfully.  There is more strength in building up than tearing down.  I wish more people got this.  Respect is sexy.

~He’s open and friendly with fans at all times. Not just when he has something to promote.  Just ask any of the fans who have run into him this summer.

~He’s often written off as just a pretty face by nameless myopic critics who refuse to look past the obvious.  Yet you will never hear him use the “poor me, I suffer for my art” card.  Instead you’ll find him giving 150% on a daily basis, with a smile on his face, genuinely grateful for the success that he has and making millions of his fans happy.

My final thoughts on this is that nice guys may never come in first, but I don’t believe they finish last either.  Somewhere in the middle is our

In my opinion, there is no greater compliment than that. 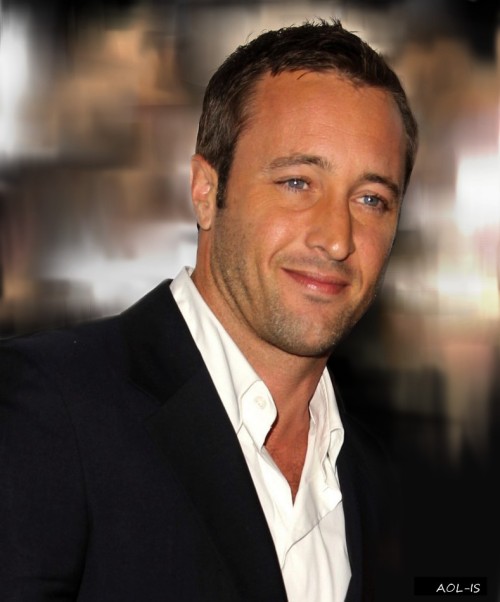 9 responses to “#AlexOLoughlin in a nutshell …..”