My Conversation with #AlexOLoughlin, by Pam N (Dec 2008)

This is a telephonic interview that Pam did with Alex on  5 December 2008, and it is rather unique. We have posted a few live chats in our archive, where fans could communicate with Alex directly, but this is one on one, and verbal. And of course with the audio, we can hear and understand Alex’s reactions so much better, because we can hear how it is being said.

Thanks you to Pam for keeping it posted on internet. Unfortunately Pam and Carol’s site for Alex, Olaughingpress, closed down a while back.

Link to the interview at the end of the transcript as usual.

Pam: Okay, this is Pam aka Midnight Louie from Adoring Alex fan site and I have Alex on the phone. Hi Alex.

Pam: And I want to thank you so much for giving me some of your precious time.

Pam: Well, you certainly are a sweetheart, thank you.

Pam: Myself and other devoted fans would like to know a little more about you, so I have some questions here, that would help us get to do that, okay?

Pam: Alright, first. If someone wrote your biography, what would you like the title to be?

Alex: If someone wrote my biography, what would I like the title to be? I think it would probably …. This feels a little unoriginal, but it would probably have to be something like, “My Crazy Life”. Or you know, I don’t know.

Pam: So has it been crazy?

Alex: Yeah, my life is a little unorthodox from time to time, but it has been great.

Pam: Okay. Well, there you go. What’s the hardest thing you ever had to do, besides leaving home?

Alex: The hardest thing I ever had to do, besides leaving home, is probably relocating to another country, you know. And, and …. and moving my life from Australia to the United States.

Pam: Right. Okay, what misconception do people have about you?

Alex: Probably that I actually understand fame and celebrity, because I don’t.

Pam: Oh, so you are saying you don’t understand it?

Alex: Maybe understand is the wrong word. I think enjoy, you know.

Pam: Okay. I understand, alright. Are you obsessive about anything?

Pam: Really, are you really?

Alex: I’m a little ADD, and so I have to be a little OCD to get … to focus on things long and hard enough to get them done, in my busy life. So yeah, I am definitely obsessive.

Pam: So you’re definitely obsessive, both in your work and your private life?

Alex: Yeah, more so in my work.

Pam: Yeah, I would think. And it shows.

Pam: Who do people say you look more like, your mom or your dad?

Pam: Whose eyes do you have?

Pam: You mom’s eyes. And she has the long eyelashes?

Pam: Yeah, they are beautiful.

Pam: What’s your signature dish that you cook?

Alex: I cook Italian. Like pas ….. like al dente pasta with a sort of tomato based sauce. With really classic boorish ingredients.

Pam: Well that’s wonderful, because I am Italian, and I cook the same stuff.

Alex: Yeah it’s my favourite, because it’s …it’s … it’s … it requires skill. People do not realise that it require skill, but it does. Hmm, yeah.

Pam: If you were the last human of earth with flora and fauna around you, would you want to survive?

Pam: What’s the first thing you notice about a person?

Pam: What’s your least favourite thing about yourself?

Pam: Are you kidding? You don’t like your nose? 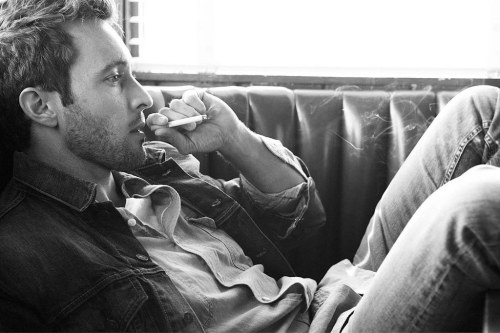 Pam: Well you know what, it gives you character.

Alex: Witchy …. I little bit of a witchy nose.

Pam: It gives you character.

Alex: Thank you for saying it gives me character, yes. Okay, that’s okay.

Pam: Sure, it gives you character. You know, it’s part of you. 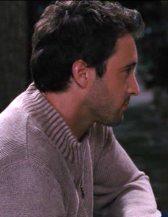 Pam: Okay, a day at the beach, what’s in your picnic basket?

Alex: Okay, a day at the beach. In my picnic basket would be San Pellegrino, prosciutto, pine nuts and tomatoes, buffalo milk mozzarella. Some …. cantaloupe, some strawberries and some cigars.

Pam: I was going to ask if cigars were going to be in there. That’s great.

Pam: It sounds great. It sounds like a great picnic.

Pam: What’s the one thing you would like people to know about you, that they don’t know already?

Alex: What’s the one thing I would like people to know about me, that they don’t know already …. That I am a terrible musician.

Alex: There seems to be rumours going around that I’m like kind of quite an accomplished musician. All I can do …. I can play, but I really I’m not really…. I just enjoy it so much, you know. I can play a tune but I am not actually any good. 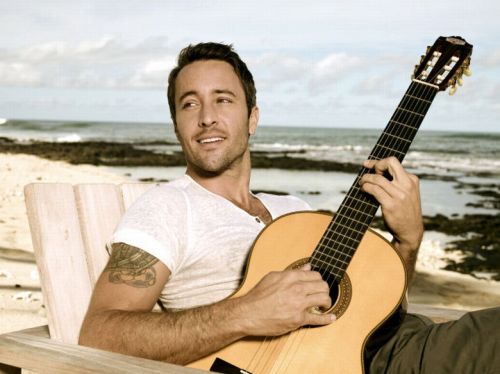 Pam: Which movie can you watch over and over again?

Alex: Ooooooo ….. that’s a good one. There’s actually a lot of movies I can watch over and over again, but I think the first one that comes to mind is Jim Sheridan’s ‘In the Name of the Father’.

Pam: I seem to remember that, yeah. Okay.

When you go home, what favourite dish to you ask your mom to cook for you?

Alex: I ask her to cook either a roast, or her pea and ham soup. Oh my god, that’s good.

Pam: [Laughs] Is it really?

Pam: Is it an Australian thing?

For which song do you absolutely have to play the air guitar?

Alex: Any time AC/DC is playing,  the air guitar comes out and I will be …. I will be rocking.

Pam: There you go [Laughs] What section of the Sunday paper would you read first?

Alex: The news section … I always read the news …. for you know, whatever paper I am reading, because I kind of …. despite the fact that I want to know what’s happening you know in the breaking news, I feel  … I feel even though I am going to the art section or the home living or whatever, I feel like I really should do the correct thing and find out if any countries have disappeared or anything first.

Pam: Well, do you ever go to the comics?

Alex: Ah, you know what? I forget to go to the comics.

Pam: Where in the world would you like to visit, where you haven’t been?

Pam: What is your best friend’s most important attribute?

Pam: Is there anyone you envy?

Pam: Do you enjoy shopping?

Alex: It’s a women’s sport you know, but I’m cool with it.

Pam: Who would you want to be for a day? Could be male or female.

Alex: Who would I want to be for a day?

Pam: Just for a day.

Alex: Whoever it was, it would probably be a woman, because …..

Pam: It would be.

Pam: Sure. Would you prefer politics or entertainment or …

Alex: I don’t know. Well entertainment I’m in. Politics is just you know another version of sort of lying, like you know, pretending like we do. There’s not much difference to what I do anyway. No, it would probably be something more ….. much more interesting like …. like nature stuff or you know, somebody that works philanthropically … I don’t know, or maybe there.

Alex: Yeah. Sorry I didn’t have a definitive  answer for that one.

Pam: No, that’s okay. And that’s it anyway. That was the last question. Thanks so much.

Alex: You know what, it’s my pleasure. Thank you very much and …..

Pam: I appreciate it. And I ….. could you please say hi to Carol, who helped me think up these questions?

Alex: Carol, thank you very much for the …. for the questions. I actually really enjoyed it … You know I loved it. It’s nice to have some well thought out smart questions, instead of the normal run of the mill questions that everybody asks. You managed to mixing it up.

Pam: And you and your family have the happiest of holidays.

Alex: I will, thank you. And thanks to you and everybody listening. I really hope you have a wonderful break.

Alex: Okay, thank you very much.

Link to the Video as posted by Pam: