Vampire on a mission – #AlexOLoughlin and his Mick

Insatiable … Alex O’Loughlin is a private investigator who is also a vampire intent on ridding the world of types like him.

Alex O’Loughlin is sitting in his make-up trailer, alternating puffs on a cigar with a serious discussion about spiritual belief and human nature. “I think really if there’s nothing out there in the dark, then once we’re dead we’re just dead and all religion, all spiritual belief, is redundant,” O’Loughlin said. “So there has to be something else, or what’s the point? And if we accept that there has to be something … then there can be anything.”

It’s a deep thought, particularly given the fact that one of the “anythings” he’s talking about is sitting three seats down: another actor who waves happily as he is made up to look like an undead soul recently escaped from hell.

It all makes sense only because Sydney-born O’Loughlin is the star of Nine’s newest drama, Moonlight, which follows a vampire private investigator out to save humanity from the monsters like himself … and hopefully save himself along the way. 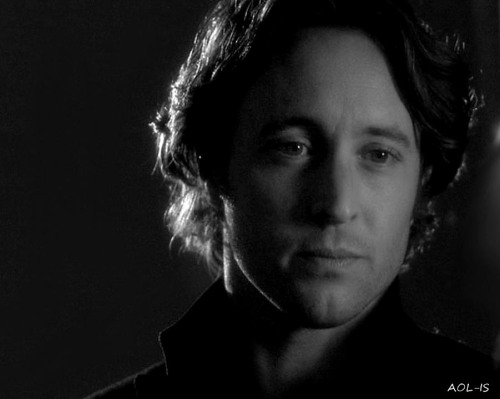 “Mick St John essentially is a human who denies the monster within,” O’Loughlin said. “He became a vampire against his will and then became a private investigator because he feels that each predator he gets rid of, each monster he kills or has put away gets him closer to the humanity within himself that he has lost.

“He’s a very complex character to play because really he hates what he is and hates himself, and that’s put him right on the edge.”

Also pushing him to the edge is his relationship with Beth Turner (played by Sophia Myles), a reporter who discovers his secret.

As a child, Beth was saved by St John and was the first step on his search for redemption. Now grown up and igniting passions he’s tried to deny, she is both the one woman he could love and the one woman he shouldn’t.

“But that allows for some really dramatic twists and changes in the character that you just wouldn’t see anywhere else.”

This complexity convinced O’Loughlin, who had previously been attracted to more conventional roles (including a much-publicised tryout as the new James Bond), that a vampire would be a good role to sink his teeth into.

“A big thing that comes up for me with this show and with this world is redemption,” he said. “At what point can we no longer be redeemed? And Mick’s hoping the answer is never.”

Vampires have been monsters, murderers, occasionally saviours and even, since 1972, a teacher helping children to understand numbers. Count Von Count, a Muppet modelled on Bela Lugosi’s interpretation of Dracula, has been a part of Sesame Street since season four and, despite his fangs, bats and wicked laugh, has been a favourite ever since. His compulsive love of counting, according to Muppets lore, is due to a condition called “Arithomania”.