Watching the latest video from Watch Magazine, you can once again see how much being a father means to Alex.

When he still had only one kid (Saxon), he said that they were very close, and that his whole world revolved around the little bloke.

And now there are three of them: Saxon, a young adult (20 yrs next month), living far away back in Australia. And living with him and Malia in Hawaii, both stepson Spike (8 yrs) and their youngest son Lion (4 yrs).

Father’s Day, my children have to be nice to me, at least in the morning – You know, when they remember too.

Being a husband and a dad are the two most important things in my life.

You know, to ….. and nothing else matters, you know, beyond that. I don’t enjoy anything else more than I enjoy those two things. So, it’s a great day.

So I get to kind of make unreasonable demands, that I don’t get to do 364 days.

Is there anything that I would like for Father’s day?

Yes, a vacation would be amazing. By myself. I know I just said I love my family. And I DO.

But l’d love to be by myself  ….  on a mountain. Like in these photos. 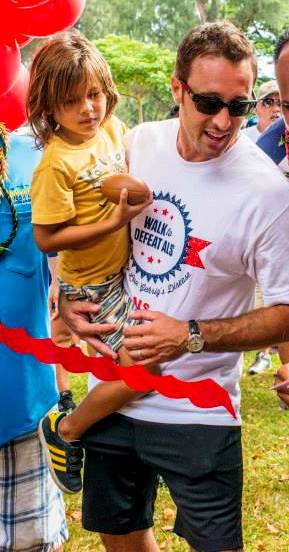 Alex and his Stepson, Spike, at ALS Walk Sept 2014

Filed under Alex O´Loughlin, From his lips, Transcript