We still need to do a few transcripts of some of the old videos, to complete our media archives.
Here is an interview for Hawaii Five-0 from 7 years ago.

The very funny Alex O’Loughlin talks about Hawaii Five-0 and shows off his ability to do different accents with 19 Action News Entertainment reporter Chris Van Vliet.

Alex: Now listen; I’ve got a badge and a gun.

Alex: So, no funny stuff.

Chris: Wow. Is that a real gun.

Alex: It’s a real gun and a real badge. [Laughs]

Nothing is real, man.

Chris: It’s exactly what that does.

I want to ask you a question? You know how Five-0 has become a street term for the cops?

Alex: Is that from the original Hawaii Five-O?

Chris: I thought … I thought it was called that Hawaii Five-0, because Hawaii was the 50th state.

Alex: “Five-0 man”. Gangster sort of thing. And do you think that is from the original show? I’d like to believe that it is.

Chris: And it’s going to continue with the new show.

Chris: Would you call this a …. Is this going to be a remake, a rebirth, a re-imaging, or perhaps some other word that starts with re?

Alex: They are all good. But I think it is a reboot.

Alex: I think it is a reboot.

Chris: What exactly …. How exactly would you define a reboot?

Alex: Well …. a …. The characters have the same names.

Alex: Pretty much, you know. It’s the same sort of overall story. It’s a task force in Hawaii. Cleaning up the streets of Hawaii. Steve McGarrett is asked to run this task force for the governor. And it is crimes in Honolulu and the surrounding areas.

Chris: You have the internet now.

Chris: I hear they even have it on computers too.

Chris: A computer or an internet?

Alex: I’m going to get an internet computer.

Chris: Did you watch the series growing up at all?

Alex: I didn’t really. I mean I was pretty young when it was on TV, and ….

Chris: How old were you when the show went off the air?

Alex: I’m a ‘76 kid. So I was four years old. So I watched the reruns obviously. And my memory of it is …. I mean I remember it as an old cool cop show, you know.

Alex: I tried not to watch too much of it when we started this, because I did not want to be influenced by that. I just wanted to … I wanted to just do my character work, and ….

Chris:  It must be difficult though. You know, because there is so much material out there that you could source.

Is it not difficulty for you to kind of turn away from that and not watch it?

Alex: No not really. I mean a little bit, because I am intrigued, and I go, “Oh, I wonder how he did it back then?” But I mean it is just my curiosity that ….. It’s just the only annoying thing is that I’m really curious and I just want to have a look.

Alex: But I actually much prefer building something from nothing.

Chris: How similar and how different do you think this will be compared to the old version of the show?

You know we have technology that allows us to … you know, with computers. The internet computers

Alex: I think it is going to be very different because everything is different about TV, than what it was 40 years ago. You know, I mean even the acting.

It’s like the realism that we go for today and hopefully achieve, is much more like what happens in day-to-day life …. in real life than what it was back then.

Chris: I’ve got to ask you. Your character is American. You have this .. you do the American accent perfectly. How are you able to just turn it on and off like that?

Alex: Actually, I grew up with an American though. My stepfather a … his Canadian and so as a child I had the North American sound in the house. I think that’s probably had something to do with it.

Chris: But you can just like that, do your next sentence with an American accent.

Alex: I could, but I am not going to.

Chris: Yeah, but you might have to see my reaction then that way. It could be a big reaction.

Alex: Okay, listen to what I am saying right know. I don’t know even know how it happens. That’s the thing; it just comes out of my face.

Chris: I can’t put an Australian accent on that way.

Alex: I will give you a thousand dollars, if you do a good Australian accent.

Alex: I’ll talk to you later. Come and visit next year…

Chris: I got you to say mate. I pulled a mate out of you.

Alex: Yeah, you did pull mate out of me.

Alex: Is that a mind trick? You say moite. Say mate.

Chris: Okay. Do I get it know. 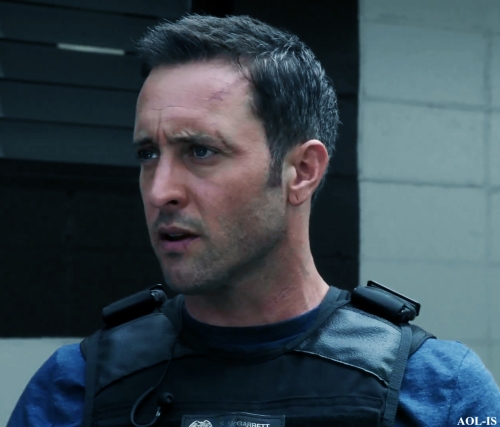 Alex: We should talk about other stuff.

Chris: You’ll talk about it later.  Do you want to talk about Hawaii Five-0 or something like that?

Chris: Can we talk about the epic .. that movement.

Alex: Yes, we can talk about it

Alex: We talked about stylistic differences from the areas of the show. I don’t have the fringe for it.

Chris: When you got the call that you were going to get this part, did you think, “I’ve got to grow my hair”?

Alex: I’ve got to grow the bangs out.

[We hear somebody drive by on a motorcycle]

That a man on a motorcycle. He’s keeping the beaches safe.

Chris: You have good hair.

Alex: Thank you. It’s just sort of hair though. You know he had HAIR.

Chris: What are your expectations for the show?

Alex: I would …. I hope the show is a big hit. I hope millions of people around the world will really enjoy it as much as I enjoy … Enjoy watching it as much as I’m enjoying making it.

I mean, I’ve done a few TV gigs now. And this is…. This is awesome. You know what I mean, it such a great combination of character, and crime and comedy. You know, there are great relationships, there’s great stories. There’s a lot of fantastic action and … I don’t think ….. I don’t see why it’s not going to be a hit. 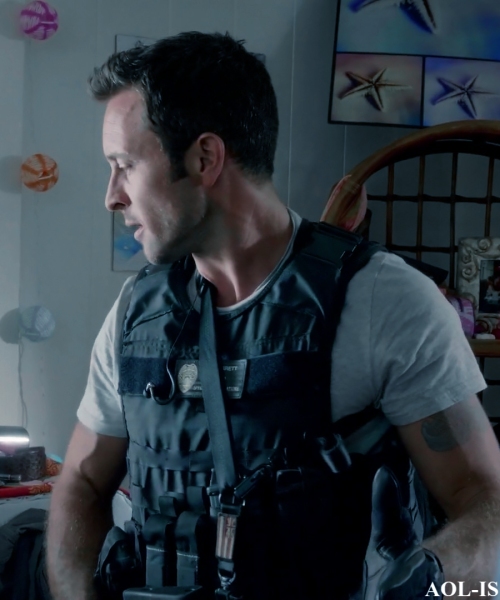 Chris: I got to try something here.

“Book’em Danno”. How was that?

Chris: Can you give me one? Maybe I can learn from it.

Chris: I’ll stop looking at you then.

Alex: I need you to look at me.

Chris: Okay. Can I be Danno?

Alex: Oh you see, you cut it off. Now you’re not getting it.

Chris: Just for a second.

Alex: You just have to look angry. Look angry. And look like ….. look like someone just did something ….. [laughs] I can’t do.

Chris: Okay, here we go. I will look at you.

Chris: That was pretty good. Thanks a lot.