#AlexOLoughlin – Interview with Voices of Krypton (2007).

Alex, talking to Voices of Krypton

about Moonlight and Mick St John.

Reporter: How insane is your life?

Alex: Pretty insane buddy. We’ve just had a very short weekend and a very early start today. And … and …. But it’s good.

We’re moving forward. And we just had some scripts picked up today. And they ordered some more scripts from it. So that’s great.

Reporter: The ratings seem to be holding up. It doesn’t seem like it is really going down much.

Alex: We took a hit on the third week.

Alex: That was with the new ‘Women’s Murder Club’ came on, which was  marketed really well. Had a lot … had a lot of push behind it. We also had a play-offs game.

And then we …. we’ve gone up again, so … from that. So it’s good. We haven’t  …. the hit that I thought that will be more significant than it was, didn’t actually do the damage that I thought it would. So that’s great.

Yeah, they are holding up.

Reporter: Absolutely. What episode are you shooting now? We’ve only seen four so far.

Reporter: In your mind how would you say Mick has been evolving, from where we met him in the beginning, you know, in that first episodes to where we are now where you are shooting? I mean, has there been an evolution in the character do you think?

Away from the swavey kind of cool character of Mick St John, that can perhaps sometimes seem unflustered by everything. And you know, that he can actually deal with things …. can deal with anything that comes his way.

Alex: To the human that is actually left in him. You know what I mean? You are going to bear witness to that. You’re going to see what drives him and what moves him. And what terrifies him and how it is for Mick himself on a daily basis you know.

I mean, the stuff he tries to keeps to himself, and doesn’t want it to upset his life … or …. But that’s what his sole drive is … his sole purpose is to get as far away from the inner monster that he has, you know. If he can.

Reporter: Absolutely. You know, the longer and actor plays a character, you know, obviously the actor starts feeding into the personality of the character.

You know, parts of you become picked up by the writers. I am wondering, what do you think, what aspects of you have been carried over by the writers and by yourself into Mick?

Alex: I think one of the first aspects was my humour. I mean from the early stages of the … from the presentation that we shot, before the big cast change. Before the show got picked up. And you know, before this started. The Mick St John in that presentation was kind of different from this Mick St John.

I also see the funny side of darkness. And you know firstly I understand irony, and I just have to say I share that with Mick. And that’s one of the first things that has come out.

And I guess, you know essentially in the beginning, rhythms are the first things that start happening. For the writers when they write for an actor, they pick up on your rhythm. On your rhythms, on the way that you sound, you know. 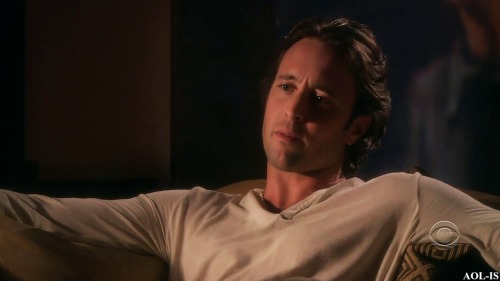 Alex: The way you form sentences and the way …. what is colloquial for you. So that starts happening.

Reporter: Do you think there’s and opportunity for that to change as this thing goes on? If more of you will creep into him?

Alex: Absolutely, I mean. Yeah I’m sure that at any giving opportunity, there’s always aspects of me in my characters. But it’s really important for me to remain separated from my characters as well.

I don’t want them to become Alex.

Alex: You know I don’t want them to …. I want them to remain as authentic to Mick St John, who is an entirely different person.

So yeah, I would like to remain … you know there will always be a very clear separation between those two people.

Filed under Alex O´Loughlin, Interviews, Mick wants to kiss you gently with his fangs., Moonlight, Transcript