We are getting closer to this seasons’ final two episodes on 13 May. Here is a blast from the past about how Alex felt at the end of Hawaii Five-0 Season 1 in 2011.

“Somebody very close to the governor is killed in a pretty brutal way, and we all witness it and we’re all a part of it,” O’Loughlin told the Herald from Oahu, Hawaii, where the show films. “A whole bunch of information is brought to light that will make us question a couple of people that are really important to the Five-0 task force. This Five-0 group that has been so tight the whole time is fractured in this final episode in a way that way that may not be repairable.”

The Australian native revealed that “a huge thing” will happen to his character, Detective Steve McGarrett. “He finds himself in a place where he has to fight for his life, and then something happens that he can’t escape from,” O’Loughlin said. 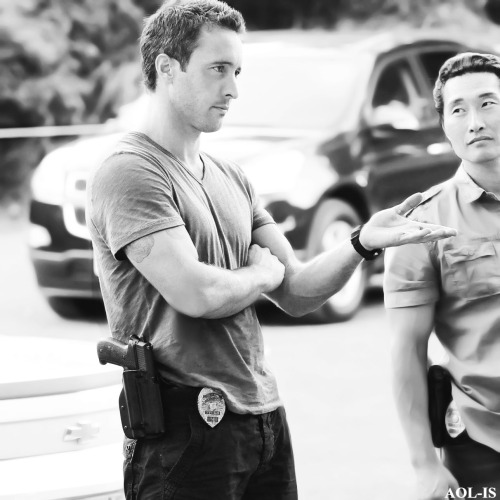 The rest of the team also will undergo big changes. Chin (Daniel Dae Kim) will be offered a second chance through the HPD. A secret resurfaces from Kono’s (Grace Park) past. Danny (Scott Caan) must make a choice about his future.
“(All this) will take us into a very interesting season two,” O’Loughlin said.

That the 34-year-old actor is even talking about a second season is a new experience. He headlined last year’s failed CBS medical show “Three Rivers,” as well as the equally short-lived 2007 vampire drama “Moonlight.”

“It feels fantastic,” O’Loughlin said of being on one of the biggest new hits of the season. “I’m very, very proud of this show.” He hesitated to join the series when it was first offered to him. “Having been the poster boy for two network shows that had essentially failed, if that were to happen a third time, I was really concerned about that,” he said.

Even though his previous series were canceled, O’Loughlin developed a devoted fan base. It’s something that he’s still not used to. “I love, love, love my fans and appreciate them so much,” he said. “It’s a very, very strange experience having people you don’t really know, know you and express great emotion to you. It’s validating to a point, but it’s also really bizarre.”

The actor relocated to Hawaii for the series and recently purchased a home there. He’ll spend the hiatus between seasons visiting his family in Australia and enjoying some much-needed downtime. “I’m working on my tan,” he said.