Alex is a SUPER nice guy: The stories behind the pictures – Chiranuj

In an interview at last year’s SOTB, Alex talked about having the Aloha in you, and if you don’t, that you will never understand it. Looking at these pictures and reading the story, I got a sense of what he meant by it.

Most of you have seen these pictures and some have asked for more information about them. We asked Chiranuj to tell us a bit more about her visits to the set of Hawaii Five-0 and she was kind enough to share more details with us.

Chiranuj was fortunate enough to get these opportunities to visit the set through different friends who knew how much she loves Hawaii Five-0. She is from Thailand where her family owns Thai’s Singha Beer. Through her work in the tourist industry, she has been able to travel a lot and visit many destinations. One of them being Hawaii.

The first of these visits came about through a friend in the military, who was also involved in shooting some scenes for the show on previous occasions. The chance for this first visit came in January 2014. From the  pictures taken that day, it looks like everybody enjoyed the visit very much.

Chiranuj, describing the visit in her own words:

I’m so crazy about 50 that I told my friend I’d fly all the way from Thailand just to meet them!  It turned out I was in LA at the time. My friend was worried that I will probably only get 15 mins at most to meet them.  It might not be worth the flight.  But I went, just for 2 nights to meet them!  Got there late Sunday night, went to the set in Chinatown and back to LA the next day.

We got shuttled to the location by the nice and very friendly staffs. When we arrived on the set, the staff was like….‘wait, we don’t have a scene with soldiers today”. Then he realized that these people were real and were Alex’s guests. So we were treated super nicely. They got us the chairs to sit and watch the filming right behind the monitors with the producers. No one told us to move here and there. We were like part of the crew.

Alex and Scott came and chatted with us for a LONG time. Alex showed us the things and props they use on the set. Both stars are TOTALLY friendly and nice, ESPECIALLY ALEX. I mean, these were the main stars of the show and they really took their time and just chatted with me. Alex even invited us to snack and told us to hang around as long as we like. I was there about almost 2 hours. To me, even just 10 minutes of his complete attention was worth the whole trip! 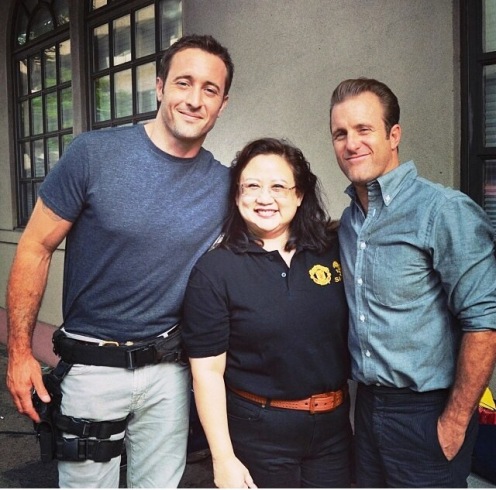 On the second visit she was invited by a lovely set staff member. It was during  the filming and cake cutting ceremony of the 100th episode in September 2015 and also Sunset On The Beach the next day.

We asked about her experience with this visit as well ….

I was at the staff’s family section and met all the stars.  I met them at the studio filming the 100th episode earlier the day before, even CBS Chairperson, a very nice lady.  Alex remembered me immediately at the filming of the 100th episode, although there were tons of special vip guests. 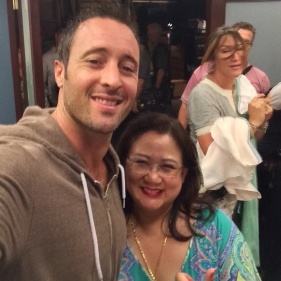 He had the toughest scene, fighting Wo Fat in the wet laundry room.  Alex was very into the scene and really put 200% in with inputs and fighting choreography.  He came into the cake room all wet, but still greeted and selfied with me.  Alex got really sick after 100th episode filming cause he was wet the whole day doing the fight scene in the laundry room.

So at night on the beach, he walked into the red carpet and a lady tv reporter was interviewing him.  When he saw me, he told her while pointing to me that “…unlike her, she’s all the way from Thailand”.  There’s a pictures of him pointing out to me. 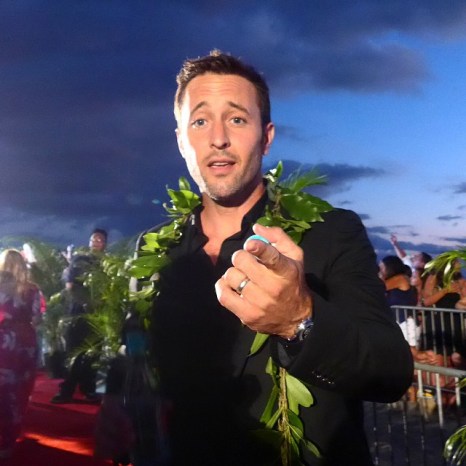 Because one of us LOVE cake so much, we just had to ask about the cake for the 100th celebration, and got a very clear answer from Chiranuj. 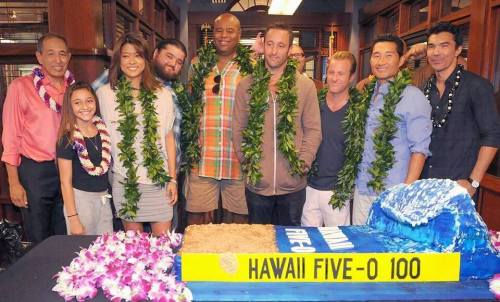 During her 3rd visit in November 2015, while they were filming last week’s episode (614), Chiranuj and Alex got some time to talk about their common interests in martial arts and Japanese culture and about Thailand. And since she was Thailand’s first female private helicopter pilot, about his  like for Squirrel helicopters as well.

They also had some time for some fun……

I asked him too and he said Malia punched him that morning. So I just teased him with my punch.

(Of course by now we know who really did it 🙂 )

We asked if she is already planning her  next visit to Hawaii and got this.

I hope so.  I hope they will extend the series to the 7th Season.  If yes, I’ll definitely be there!!

A big THANK YOU to Chiranuj for allowing us to share her story of love for Hawaii Five-0 and through that, meeting Alex and making this beautiful connection with him.

Stories like these strengthen our affection for Alex, this very special person who also happens to be an actor.

13 responses to “Alex is a SUPER nice guy: The stories behind the pictures – Chiranuj”