And ALL the beautiful pictures of Alex, done by Paula

Question: What ignited your initial interest in being involved in the reboot of Hawaii Five-0?

Alex: The script. I read the pilot script that Peter Lenkov wrote and it was excellent. It was one of if not the best pilot I’ve ever read and I don’t know I just … When you read a piece, you either know what to do with the character right away or you don’t. And I just knew what I was going to do with McGarrett. 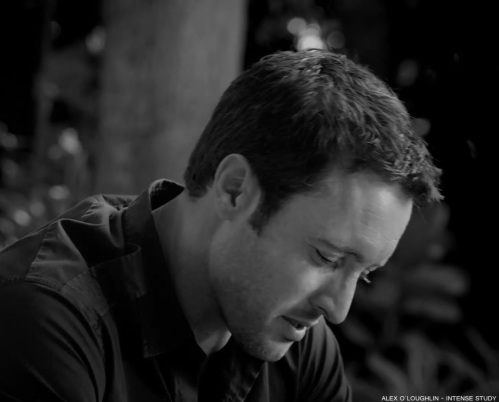 Question: Had you seen the original, so you felt like you could relate to it?

Alex: Not really. I mean, I knew the theme tune, like everybody does and I sort of had vague memories from when I was – because I was very young. I think I was like four years old when it came off the air. It’s something that’s been gone for a long time. Of course it’s been in reruns over the years but it’s old TV – it was a great old show, but it’s old TV. It’s not my generation.

Not just the show itself, but television in that time – it was a very different animal. Things were very sort of stylized and postured. Acting was different, you know? So now not only is the acting style very different but we have technology that allows us to do so much more and put so much more on the screen.

Question: What sets Hawaii Five-0 apart from other television series you’ve been involved with?

Alex: I did The Shield but that was a cable show, and cable and network are very different and I’ve played a vampire, played a cardiothoracic surgeon, and now I’m playing a Navy SEAL slash law-enforcement officer, so they are all pretty different.

But the show itself is, I don’t know… I don’t think I have been on a such a well-balanced show before, I feel like in casting, in storylines, in the balance that the show has of character, crime, comedy, action, I feel like not only is Hawaii Five-0 set apart from the other shows that I have done but it’s set apart from everything else that’s on TV, in the sense that it’s really well-balanced, it’s very exciting, there’s something in it for everyone.

Question: Can you discuss the dynamic yet strained relationship between Steve McGarrett and Danno Williams?

Alex: Yeah, these are two guys, they’re kind of like the odd couple a little bit but there’s also something that’s very siblingesque in their relationship. They’re almost like brothers. They met each other, they kind of have a fistfight immediately, but there’s also a mutual respect that sort of comes very quickly as well because they both see that the other can hold their own and they both see that the other is a very clear individual and very focused and very themselves, if that makes sense.

These two, they perpetually aggravate each other, they have a sort of bromantic banter, which I saw written in one interview, which is just a great descriptive for the thing that they have between them. They sort of do have a bromance that comes and goes but they also complement each other perfectly in the sense that they can finish each other’s sentences, which means they can feel each other’s thoughts, which is kind of crucial in police work. They’ve got each other’s backs and now we’re twelve episodes in and we’re starting to see this common bond that’s forming between the two of them.

Question: Did you feel an extra amount of pressure when first asked to play an iconic and beloved character like Steve?

Alex: No, not really. I think I’ve felt more pressure in the past when I’ve played real characters, like people who actually existed, you know? And if I think about it, I feel a little bit of a squeeze there especially from my father’s generation. There are a lot of fans and it was a very successful show and Jack Lord – I mean there are statues of the guy here on the island.

And I certainly haven’t referenced any – none of my source material is Jack Lord’s work and what’s important for me in everything I do, what’s been important for me in this – because it was such a big show for so long and so many people knew it – was that I didn’t go back and look at the old stuff because I don’t want anything I do now to be influenced by the work of another artist. 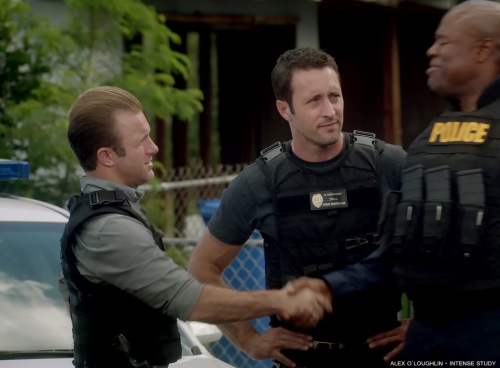 Question: You’ve been involved both in television and movie productions. What are the differences between the two media and do you have a preference?

Alex: Films are my preference. I much prefer to be working in films. I’m very grateful to work at all but television is – I don’t know. A lot of people work in TV but my experience in television being number one on the call sheet and having the work load that I do, there’s a lot of heavy lifting, and it all happens very quickly and you need to have a certain skill set to get through and maintain balance and truth in the story throughout. And I’m not someone who can just phone it in, and so it takes an additional amount of work for me to get to the truth on a daily basis when you move as fast as you move in television.

On a feature you’ll do maybe two or three pages a day. On TV we’ll do up to ten to twelve pages. The sheer volume of work can be so overwhelming. I think time is the main thing. If there’s a problem in the script or there’s problem on the set, even when it looks great on paper, you get there and the cameras are rolling and say, ‘Oh my God, there’s a problem in the scene, we have to sort it out.’ You don’t have the luxury of time, where when you’re shooting a film you can devote the entire day to that scene – doing it backwards, doing it forwards, changing it up – you’ve got like twenty minutes on a TV set to do that.

Question: What are some of the challenges of shooting a show on what some might consider a remote island like Hawaii?

Alex: Well, first of all, you are a long away from home, wherever home might be, because you’re in the middle of the ocean. I’ve been in L.A. for six years now, so that’s sort of home for me. That’s been my home for the last six years and Australia is really where my heart is. Now I’m in the middle of – between the both and so, the main challenge has been acclimating here and just sort of trying to meet people and trying to just settle and have a life here.

But logistically for this particular show, Hawaii Five-0, since we’re shooting in Hawaii, there haven’t been that many challenges. I mean, it’s great because the island plays the fifth character in the show and she’s here and it’s a small island and we can shoot as much of it as we want. It’s kind of easy to get around and stuff.

There are some challenges, like the speed limit’s 25. To move an entire company takes a minute and it rains at the drop of a hat and you have to be prepared for that. For me personally, I work in combat boots and army pants all the time and I do a lot of stunts and a lot of action. A lot of it’s on beaches and soft sand under the hot sun. I mean there are a lot of physical challenges, it’s very physically demanding.

Question: What was your reaction when you found out Hawaii Five-0 was picked up for a full season?

Anyone who works on TV will tell you it’s so much work. It’s just so much work. Like you see, I’ve got my next script with me and I have to read that in between interviews because I don’t have time. And we started at seven a.m. today, we’re going to work through to midnight, and that’s not unusual to do.

So part of you goes, ‘Oh my God, I’ve got to do 22 of these.’ There is part of you that – it’s not fear, it’s more of an apprehension, I suppose, just because it’s so physically demanding, but you’re only young once. These opportunities don’t come around all the time, so I’m stoked.

I’m really excited to see – one thing I was really nervous about when I sat with Peter Lenkov, Alex Kurtzman and Len Wiseman, who directed the pilot, and they initially offered me the role, I sat with them, I said, ‘Look, the thing I don’t want to do is end up on a straight procedural. I don’t want to do that sort of TV.’ Because we’re saturated with it. I can’t do anything different than anybody else has already done and so they assured me that that wouldn’t happen and there have been a couple of straight procedural stories but ultimately there are a lot of serialized stories throughout. There’s a lot of character stuff coming up and so I’m excited about exploring that because as an actor, my job is character.

Question: Why do you personally think the show will translate well to international audiences?

The thing is, especially for people who live up in the snow and stuff – we’re showing it to people who have very cold winters, around the world. You get to go to Hawaii once a week and see hot people in bikinis. It’s such a beautiful, special place, this island, and to be able to visit it once a week is something I think people will enjoy.