Television’s coolest squad—Hawaii Five-0—has never been hotter
With a sizzling cast, blistering action scenes and tropical setting, CBS’ new hit drama brings the heat – and gets to turn it up for Season 2
Originally posted April 2011 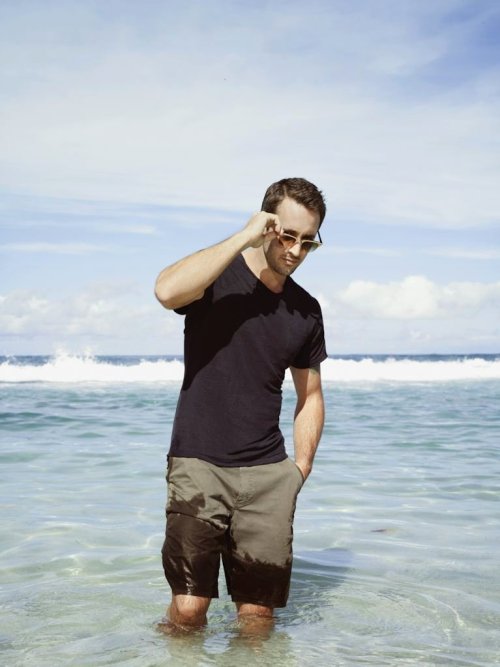 Picture from @Mymaximus – As always thank you for the great pictures of Alex that you always post.

At first, it seems like just another perfect day in Honolulu: wind rustling the palm trees, waves lapping against the shore of Fisherman’s Wharf, ceaseless blue sky overhead. Then, out of nowhere: “Fire in the hole!” And a moment later, a car on the pier explodes in a huge fireball, sending black smoke billowing upward and frightened tourists running for cover. Trouble in paradise!

Welcome to the set of Hawaii Five-0, CBS’ hit reboot about attractive cops in an attractive place solving unattractive crimes. Whether it’s car bombs or corruption, terrorism or treason, the guys and gal of Five-0—ex-Navy SEAL Steve McGarrett (Alex O’Loughlin), New Jersey transplant Danny “Danno” Williams (Scott Caan), local detective Chin Ho Kelly (Daniel Dae Kim) and rookie Kono Kalakaua (Grace Park)—bend the rules to break a case every week. And break a few records, too: With an average of 13 million viewers per episode, Hawaii Five-0 is the highest-rated new drama on TV and the most-DVR’ed show of the season. 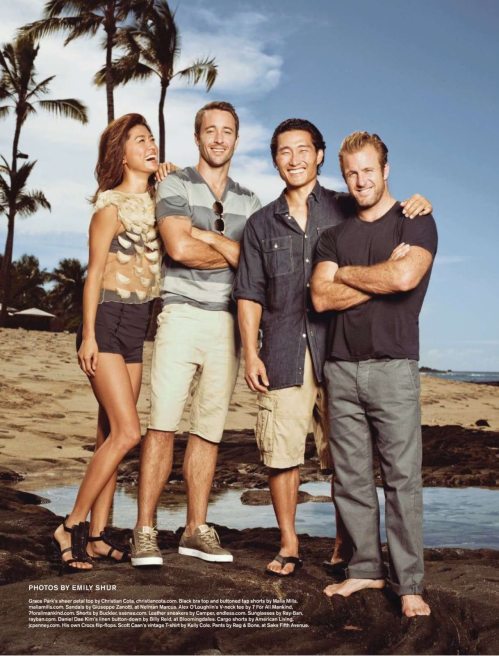 “I THINK WE HAVE something going for us because we’re shooting in Hawaii, and there’s something about this place that’s eternal,” says Kim. “In the dead of winter, people will always want to see a beautiful location with good-looking people in bikinis. Every episode is like a postcard.”

“We’re in a genre that people are familiar with—the procedural cop show—but we’ve got a combination of good stories, comedy and interesting characters.”

Not like there was any, uh, pressure for the show to succeed. The pilot only cost millions of dollars, Star Trekkies Alex Kurtzman and Roberto Orci are executive producers, and the legacy of a treasured franchise hangs in the balance.

“I just ignored it,” O’Loughlin says of the sky-high expectations, reverting to his very un-McGarrett Aussie accent. “Our studio execs are really good, we have awesome producers and we’ve got a team of strong people. So the end product is, within the parameters of network TV, really good.”

Given that the road to primetime supremacy is paved with failed remakes (see Rider, Knight), the trick was to do not so much a redo as a reinvention. Which meant casting, from scratch, a team that clicked right away. A team with chemistry—easier said than done.

So producers found four actors from four different places—O’Loughlin from Three Rivers and The Backup Plan, Caan from Entourage and Ocean’s 11, Kim from Lost and Park from Battlestar Galactica—which neatly paralleled the premise of the pilot: a fearsome foursome of do-gooders who unite to keep Hawaii safe. O’Loughlin would bring the brawn, Caan the banter,  Kim the brains, Park the body. Add water and sand, and—boom!—the show became greater than the sum of its parts.

Perhaps the most gun-shy about doing it was O’Loughlin, who’s already been on two canceled CBS shows (the aforementioned Three Rivers and 2007’s vampire drama Moonlight). Only after meeting Kurtzman, pilot director Len Wiseman and executive producer Peter Lenkov did O’Loughlin decide to don his Five-0 police badge. Then came the task of finding his Danno.

O’Loughlin read with a whole raft of actors—“a lot of really amazing, really well-known guys”—and still found himself flying to the Pacific Rim without having met his new co-star.

“All of a sudden we were here in Hawaii, at the table read for the pilot, and they’re like, ‘Oh, this is Scott,’ ”O’Loughlin recalls. “And I was like, ‘Uh, hi, Scott.’ He’d just landed, and we got in the van and drove to the table read. He was texting his new girlfriend at the time, and I was like, ‘Really?’ ” O’Loughlin chuckles at the memory of it. “But I realized in that moment that, OK, this is cool. We just riffed. The bromance began.” 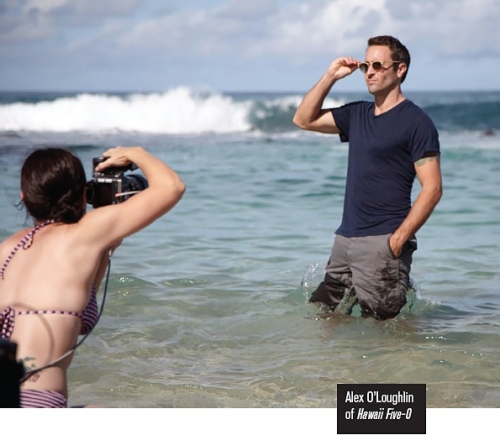 The buddy cop rat-a-tat between McGarrett and Danno is one of the things that makes the show fun to watch, and it carries on between takes, when they like to cover their mics and—safely out of earshot—natter like frat boys. Here’s one of the (printable) exchanges:

Caan: [Sniffs, pinches the bridge of his nose.]
O’Loughlin: You sick?
Caan: No.
O’Loughlin: Don’t be sick.
Caan: I’m not sick! I have, like, nonstop throat issues.
O’Loughlin: Do you gargle sea salt? Kills bacteria.
Caan: [Loudly] Oh, can someone please get me hot water with salt in it? No, I’m kidding. Please don’t.

Caan and O’Loughlin also hang out off set—until they get sick of each other, anyway—and bond over training, mixed martial arts and surfing (duh).

Park and Kim, on the other hand, prefer finding tasty restaurants to tasty waves. But from time to time, all four of them will grab a bite together “off campus.”While we won’t say what O’Loughlin likes to tease Caan about, he enjoys gently ribbing Kim about his large hair and Park about being a diva.
“And they give me crap about everything ’cause I’m impossible to work with,” says O’Loughlin.
The four Five-0-ers even live right near each other in Honolulu—not that photographers bother to lurk. Local paparazzi, perhaps aware of how much money the show pumps into the Hawaiian economy, are “not nearly as bad as in L.A.,” says Caan. “It’s mellow.” 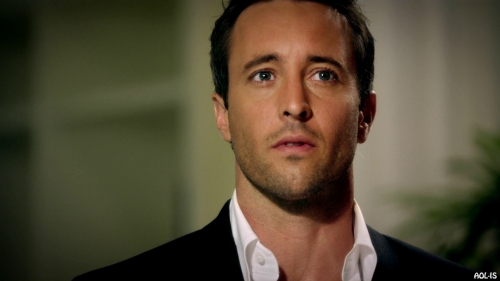 For such a laid-back island, the vibe on set is all business, all the time. For a simple shot of extras running from the car bomb on the wharf, the director does four or five takes to nail it. On any given day, the cast and crew will wake up at 5 a.m., and they all log up to 80-hour workweeks without batting an eye. Call it … Hawaii Eight-0?

To keep things light during those long days, Caan brings his dog to set (a 4-year-old blue heeler border collie named Dot), Kim tweets on his iPad and O’Loughlin hams it up. While shooting a soundstage scene in his Chevy Silverado later in the day, he spontaneously breaks into song and honks in rhythm: “Every time you goooooo / To the place that we knowwwwww … Beep, beep!”Park, for her part, likes to tease members of the crew. When four crew dudes move a tent to shield us from the sun at Fisherman’s Wharf and proceed to stand there, holding it in place, she crosses her arms and declares mock-seriously, “I’m still waiting for you guys to take your shirts off.”

The show is dead serious, however, about safety—and authenticity. Five-0’s military technical advisor is an ex-Navy SEAL, and O’Loughlin did weapons training with a team of SEALs to prep for the part of Lt. Cmdr. McGarrett.

That said, O’Loughlin is willing to do as many stunts as they let him. For one of the high-octane dirt biking scenes, crew members handed him the fastest Honda they had and a pair of sunglasses, and told him to do his worst. “It was incredible,” he says.

Caan, who hurt his knee early on in the production, has no interest in such shenanigans: He spent most of his 20s making bad decisions in the pursuit of a good time.

“I’ve done so many stupid things in my life that at this point, if I don’t have to risk getting hurt, I won’t,” he says, smirking. “I’ve fallen off horses, motorcycles, cliffs, skateboards, surfboards, busted my head open, and gotten stitches and surgeries all over my body. They don’t pay me enough to hurt myself on this show.”

O’Loughlin may be the natural leader, on screen and off, but it’s Caan—with his wisecracks and desert-dry sense of ennui—who snagged a Golden Globe nomination for best supporting actor. Unsurprisingly, he shrugs off any label of breakout star.

“I’m just trying to have fun,” he says. “It’s a nice thing when people say nice things about you. … I didn’t realize I was insecure until I turned 30. I always thought I was the [bomb], and then I turned 30 and I’m like, ‘Wait a minute, I’ve got all kinds of fears and insecurities.’ So, it’s a nice thing.”

As for any romance between Danno and Kono, it’s more likely to snow in Waikiki.

“I killed that idea early on,” laughs Park. “It’s good to drop a couple hints and then go nowhere with it. The tension is what’s interesting— we learned that from [The X-Files’] Scully and Mulder.”

Instead, writers toyed with the notion of hanky-panky between one team member and another’s ex. One early but scuttled idea:

“What if McGarrett hooks up with Danny’s ex-wife and didn’t know who she was?” says Park. “That would be so awkward!”

There’s also plenty of potential in the new blood coming on the show: Larisa Oleynik (10 Things I Hate About You) will play a recurring role as an ex-CIA operative who helps McGarrettchase his nemesis. Not to mention the steady parade of guest stars. To its credit, Hawaii Five-0 has managed—without veering into cheap stunt-cast territory—to book some buzzy cameos so far (Dane Cook? Check. Nick Lachey? Check. Diddy? Check … to see what his name is first).

“What do we call him?” asks O’Loughlin of the rap mogul’s upcoming appearance. “P? Sean? Puff? Diddly Doo Doo?”

Nicknames aside, Park digs the chance to meet guest stars in the flesh.

“We all have stereotypes about other people that we hear in the press or we know of and it’s great to meet them and be like, ‘That guy’s awesome’ or ‘She’s down to earth’ or ‘I can’t breathe, their ego is filling the room.’ ” She smiles. “There hasn’t been anyone like that … yet.”

Maybe next year. Now that the show’s been unofficially renewed for a second season—righteous!—the cast can concentrate on wrapping Season 1 with a bang, not a whimper.

“Unless they’ve been lying to me,” says O’Loughlin, “there’s going to be some awesome twists and a fracture and deconstruction of the team, which is really interesting. That level of conflict when we come back for Season 2 is going to be great.”

Of course, for all the show’s sin, skin and movielike production values, future generations might very well marvel at its early millennium-ness—just as we do now about the retrotastic look of the original series. 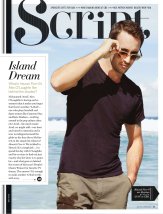 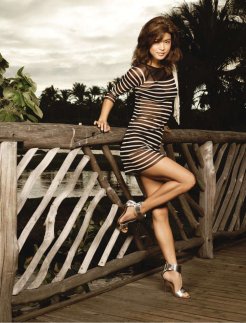 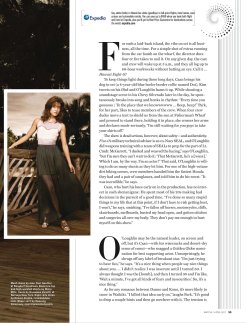