Me and My Ex-boyfriend McGarrett (Okay, Maybe Not!) – December 2010

Another old fan article we found on Alex O’Loughlin Rocks. The article is very entertaining and written by someone with a great sense of humour, and we just had to share it. Unfortunately we could no longer find a link to the original article or the original pictures.
Me and My Ex-boyfriend McGarrett (Okay, Maybe Not!)
3 December 2010
by Honoluu Girl Suz

It’s time, it’s time! For what you say, well let me explain on this eve (or um, day) of Eclipse DVD release.
It all started with a young girl who is on the same cheerleading squad as my daughter and goes to the same elementary school, landing the lead role as Danno’s daughter on Hawaii Five-O. Pretty cool, huh?
Well that got me wondering… To be honest, I didn’t even think about background acting till now, but hey, what the hell. Did I mention I have a severe phobia of “strange people“? Yes, keep that in mind. Most “strange people” become actors. No, really they do. I swear. But we can discuss that later. 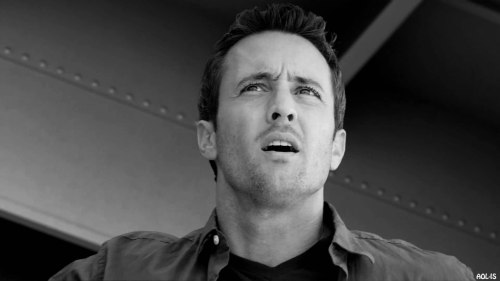 In a nutshell, here’s my acting background: I wrote a play in Junior High about babies talking. The school liked my play and produced it. I took a smaller role as one of the mothers. This counts right?
Then in college, I got scammed took classes and found an agent. I did get called, but realized I hated driving. Being already in San Clemente (right above San Diego), Burbank, etc.. was just too damn far. Thus my career ended.
Oh for the love of God, I could care less! But, I did suddenly get the bug to want to act again, or just stand like a plant, whatever… and that’s how I sent in my info into Hawaii Five-O casting. Hey and guess what? They called me.

Now… let me tell you. Background acting sucks. We got called very early on to set only to be carted off in a van to fill out paperwork and have breakfast. “Oh, no time for breakfast, grab your paperwork and head off to wardrobe” (they were very specific about what colors were allowed on set-you couldn’t clash with the main actors). “Oh, now that you have been checked by wardrobe, we need you back on set.” Jesus! Those eggs looked good!! My stomach starts to rumble.
(This is when anxiety sets in because I do not like to mingle with people I don’t know. I’m super shy!! To the point, I might cry. Why do I do odd things by myself? I fucking do not know. But my stomach at this point was really knotted. There was at least 30-40 people there and it seemed like they all knew each other. All I could think at that moment, was fuck you and your stupid cliques. Suck my ass, I have a real job. See, my shyness becomes anger if I feel lonely.)
Thankfully at this point we got ushered into the Kahala Hotel, the location which is supposed to simulate Monday night’s scenes on a cruise ship.

(Interestingly, they shoot the same scenes, over and over again. They shoot from a right and left angle, and from a distant view and close up view. I will say the cool part of the experience was watching how much work and effort from the crews, goes into a few seconds of a shot. I do give them credit for that.)
Really, it was very awesome to work so close with these actors, but the rule on set is that you are not allowed to bring in a camera. But since I’m playing a tourist, I have my purse with me. Guess what’s in my purse? My iPhone!! 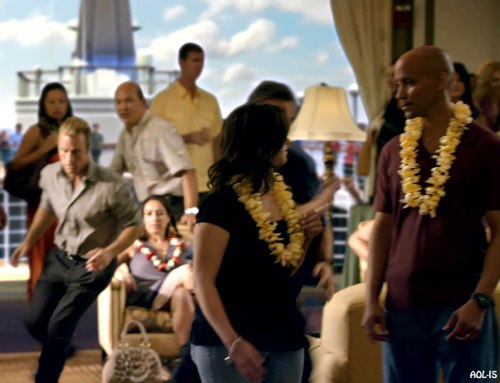 Back to my story. I did several scenes where I walked in behind McGarrett, but the most memorable scene that morning was when I sat in a chair in the lobby and Danno runs by me. On one take, his pant leg got caught on the glass on top of the table, and down it spilled, breaking large shards everywhere. Shit, I got nervous that I tripped him. But, the production assistant assured me it was okay and to go back and sit down. I did as she told me to, but this time they creatively used the broken glass as a prop. (If I were a tourist on a cruise ship, why would I be sitting in front of broken glass? Huh? Don’t you think my fat ass would have gotten up and called an attendant?)

Anyhoo!
Then I did several scenes where I walk down a stair case and McGarrett sprints down after. We did this take several times, but it was here I got to talk to my cutie, Alex O’Loughlin (which many of you love him from his vampire days on Moonlight). Standing already at the top, we were shielded, so the crew couldn’t really see us. As Alex was coming up the stairs, I asked him if I could take his picture. He smiled, and said yes. Ah, that smile… He won me with his smile.

Then Alex laughed and said I was weird for wanting to take a picture of only him. He said most people like to be in the picture and then he pretended that I was standing next to him and held his arm in the air like he was hugging someone. I got really shy at that moment but the lady next to me offered to take the picture and with everything in me, I ran over to Alex.

I have to say, I think Alex loves me and had his eye on me all day. I’m just saying… I think we have something and well, since I’m married, this affair will have to end. Actually it did that day at 4pm when I clocked out, but whatever…
Soooo, after my skin turned back to a normal color, and my temperature stabilized, I took a moment to sit. Dammit, that moment didn’t last because the next thing I know and mind you, it’s lunch by now, they are ready to release all but 10 actors. So the assistant asks, “Who thinks they are a serious actor, raise your hand.” Fuck it, I raised my hand. This one lady looked at me because I had talked to her in the morning and told her about my day job. What? I am a serious actor. At that moment!

Well, I get picked.
Great, now they let everyone go and it takes them a good hour to check and sign timesheets. Argh, still no lunch!! Then the ones that are left, are huddled next to me like I am some beacon of light. A guy comes walking over to me and two of the young girls sitting next to me. “Hey beautiful people, what are the beautiful people doing over here?” In my head I respond, Shut the Fuck Up! Then some other OLD guy comes up and is all, “Hey gals,” (to the two young college girls next to me), “I’ll email you.. blah, blah.” Remember how I said actors are strange and they all know each other… I was stuck in a room with 10 very odd people and without being fed, I was very likely to stab someone in the eye. 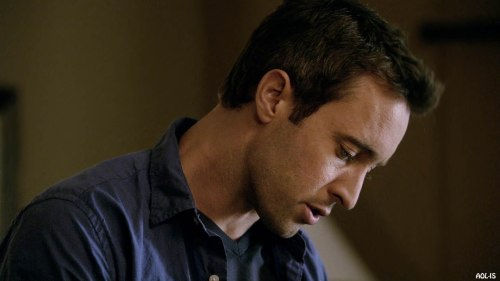 Well, needless to say I did some additional scenes where I am running down a hallway just before McGarrett and Danno bust into a room (there is a serial killer loose on the cruise ship) and I probably look retarded, and I’m sure I will be edited out of the entire episode. But if you want to look for me, like I will be doing; check it out this Monday night on CBS.
In the end, I made a whole $90.00, worked nine hours without lunch, and met some very annoying people 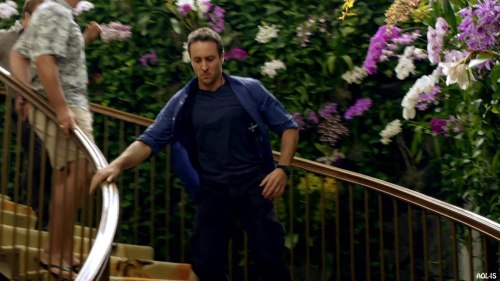 But, I also got to see first hand how much work goes into an episode, hang out with a really cool production assistant (by the way, it take them about eight 15 hour days to make one episode), and meet the ever so gorgeous, Alex O’Loughlin. Can I say, he is extremely handsome in person and very nice? He totally talked to the background actors and just has a very laid back demeanor about him. Scott Caan, not so much. He’s very short in real life and does not so much even look at you. Maybe he was staying in character, maybe he’s just a short dick. Dunno, just my observations. But, Alex did win a new fan that day!