This week started out pretty great with all the fun and celebration around Alex’s birthday on Monday. I actually wish Alex could see how much effort and love so many fans put into cards, posters, wallpapers, video’s & slide shows everywhere for him. Hopefully some of the love and fun actually reached him and showed him how much he is appreciated and loved from all around the world. 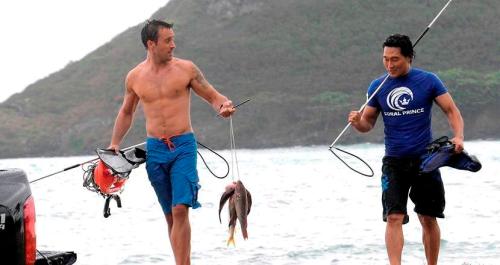 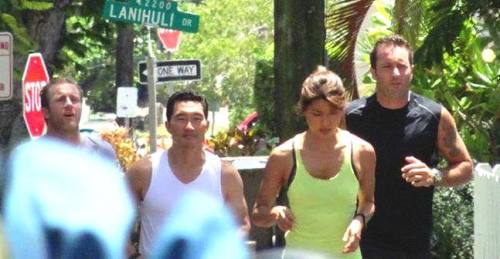 Do we recognise that ugly pirate?

Peter M. Lenkov ‏@PLenkov:  – Good times on the #H50 set – Video
(Thanks to  @H50Cassidy  for reposting the video for easier viewing)

Paula made a collage of the end of the video 😛

Boys & Girls Club of Hawaii –  Mahalo for being a part of the 19th Annual Walk in the Country! Many thanks also to our title sponsor Ko Olina Resort and Marina and the many other generous donors and sponsors. This year’s event set two records with 670 attendees bringing in $500,000 in support of our youth. Your generosity is so greatly appreciated!

Hawaii Five-0 ‏@HawaiiFive0CBS  –  Who better to celebrate #NationalBowTieDay with than this dapper dude. http://ow.ly/RvVWc  #H50

As so many fangirls keep saying – it is high time for another photoshoot and feature of this gorgeous man!

I guess I can understand why it is your dream for Alex and Scott to be”doing” one another on the sly, but what does a graphic sex drawing of them (the actors) clearly having sex have to do with the #H50 tag or  the show for that matter? Far be it from me to try and play Twitter police, or to tell anybody how to have fun, but I repeat, there is a time and place for everything .

Many fangirls are naughty and we feel free to express it and play around with our own lusts and loves – we certainly do it here. BUT all of us can choose where and how we do it and where we share it – with respect to those who will read and see what we do write in certain places. AND with some respect to our idols and their colleagues and families. Most fansgirls have the maturity to keep the naughty and the PG 18 thoughts on their own (mostly private) groups, blogs, forums and sites. And they don´t try to sell their adult dreams to the other fans in general on the #H50 tag ……….

This rant has been brewing since Monday and went on a lot longer than I wanted it to – and now it is over!