On 22 November 2011, Alex was awarded the ‘Actor of the Year‘ award at the GQ Australia ‘Men of the Year’ awards in Sydney, Australia. It was one of twelve awards of the evening that were given in various categories….. of course it was also the event where Alex first publicly introduced his new love to the world.

This is a recap of interviews done on the day:

Do yourself a favour and click on this picture to see in full size – but be aware Alex’s eyes might keep you captive, if you do!

On the ‘black carpet’:

Man of the year:

Question: Who would your “Man of the Year” be, if you could nominate someone?

Alex: That’s a tough one. Probably my Grandfather, if I could nominate someone. But he’s not around, you know, he passed away a little while ago. But he’s a …. he was always my “Man of the year”, you know. I took a lot from him and I think of him when I make important decisions in my life and stuff so …

Alex: It’s sort of  the way you conduct yourself as a man in the world. I think you have to have a bit of style,

Paula: Do you like being in a suit, or are you a jeans and  t-shirt kind of a guy?

Alex: By the end of tonight I will be yanking at my tie. I live in Hawaii, so it´s perfect. I´m boardies, t-shirt and flip-flops kind of guy.

Paula: Have you got that visual, women of Australia? Pretty painful.

Paula: And are you a boxers or briefs  guy?

Article & Interview about his new lady:

A NEAR-death experience in the water as a child has kept him high and dry, but Alex O’Loughlin’s blooming romance with professional surfer Malia Jones will soon send him into the waves once more.

The Hawaii Five-0 hottie showed off the new love of his life at Tuesday’s GQ awards, saying they are madly in love. “I have fallen for a beautiful Hawaiian woman,” he told Confidential. “I’m a very lucky guy and very happy at the moment. She’s amazing.”

Glamazon Jones – once named one of People magazine’s “50 Most Beautiful People” – said she is on the brink of giving O’Loughlin his first surf lesson in Honolulu, where they are both based. Jones is a divorcee. In 2007 she married fellow pro surfer Aussie Luke Stedman, with whom she has a son, two-year-old Spike. O’Loughlin, who used to date Holly Valance, also has a son, Saxon, 15.

Alex: I’m in a relationship with a beautiful Hawaiian girl.

Joel: With a beautiful Hawaiian? Okay.

Joel: What’s her name, if you please?

Alex: Her name is Malia

Joel: Nice. How long have you guys been together? 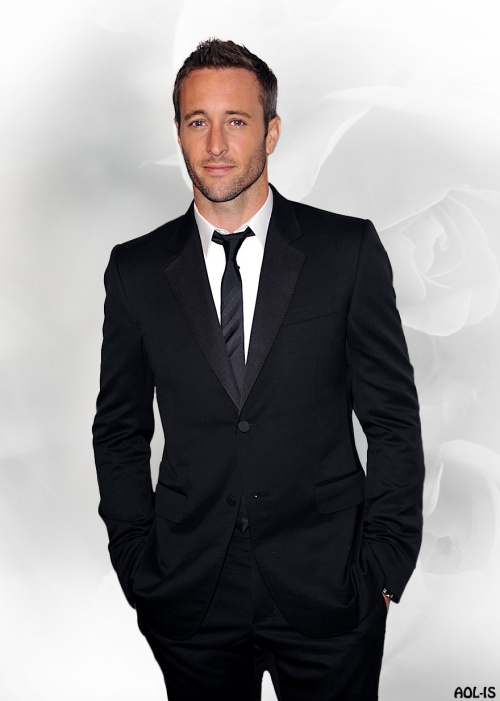 Alex O’Loughlin in a Gucci Suit, D&G shoes and a mix of other brands he couldn’t remember.
Handsome, down to earth AND friendly.  Love his style.

Jack: I am very proud to announce this young man as the recipient if this award, Alex O’Loughlin

His drive, passion and hard work have turned him into one of our hottest acting exports of all time, starring in the hit crime fighting television series Hawaii Five-0. He describes himself as ‘not massively talented‘, but that is rubbish.

Alex: I can’t believe I’ve just been given ‘Actor of the Year’ by ‘Clancy of the Overflow‘. I was in the Red Carpet .. Black carpet at the front and the young lady interviewer said, “Who do you think should be nominated, ‘Man of the year’?” I said, “Jack Thompson should be given a shot“. And she just like [blank stare] …..  I realised, you don’t know who Jack Thompson is. So Jack, thanks mate. Look, it’s a real honour to be here, to be recognised by Gentleman’s Quarterly, best magazine in the world

I feel very lucky to have the job I have and to be able to do it with a great group of people and to do it in a place like Hawaii at the moment. And I’m in very good company. Congratulations to  everybody else getting one of these. So thank you very much for having me.