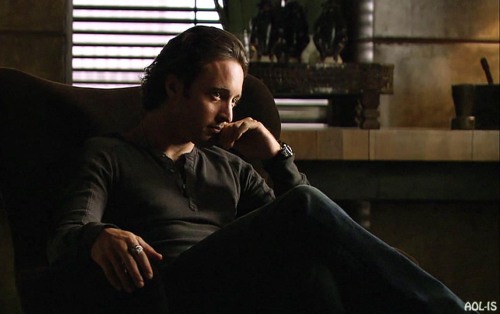 Question: How does it feel playing a 90-year-old vampire?

Alex: It’s a strange thing and at first I was like, “How can I play a 90-year-old?” I didn’t understand where to go with it. If you were playing a 90-year-old normally, you would do the physical transformation and that helps you get into character.

Mick St John is carrying the weight of that age and that world and sometimes I go home after playing this guy and I’m so exhausted because the concepts are huge. But it’s really fulfilling and rewarding at the same time.

Question: What is it like being famous in Hollywood?

Alex: It’s a little bit scary actually. On the Warner Bros lot where we shoot the show, we have these VIP tours on golf carts and a few fans have gone crazy seeing me outside the sound stage.

I did a charity event last weekend and 40 women flew in just to meet Mick St John!

Question: How did they react?

Alex: There was a lot of yelling and shaking and I’ve never experienced that before.

In Australia, occasionally someone would pat me on the bum and say, “Good work in such and such,” but people here seem to be overwhelmed by the show and the character.

Question: How did you wind up working with Holly?

Alex: The truth is I had nothing to do with her getting the role. I got a call as we were approaching the episode and the producers said, “Just to let you know, Holly will be playing Lola.”

So I called Holly because I didn’t even know she was reading for the role and said, “Honey, guess what?” and she said, “Yeah, I know!”

Question: Why did she keep it from you?

Alex: Holly is a woman of great integrity and she’s very special. I can’t believe how mature she is for her age (Holly is 25, Alex is 32) and she just felt that I didn’t need the distraction. She also felt it was very important that if she was going to get a job that had any sort of association with me, she needed to do it completely of her own accord – and she did.

Question: How was it working with Holly – especially as your characters have a fight scene?

Alex: I was wondering if it would be weird, but it was totally comfortable. And the great thing is they’ve killed her character off ambiguously, so you never know – she may come back! 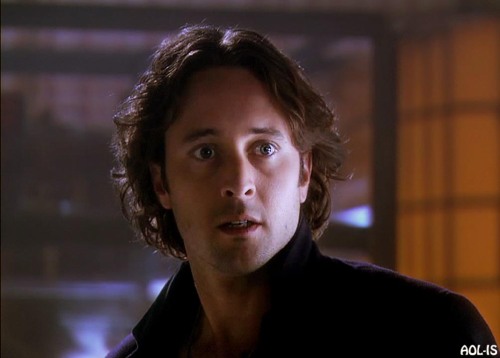 Question: What can you tell us about your character Lola?

Holly Valance: She’s 500 years old and is running a drug-dealing business. But the drug isn’t any substance that’s known to the police, so they can’t work out how she’s putting people in this euphoric state. Mick is trying to stop her.

Question: How was it playing a 500-year-old Vampire?

Holly Valance: I had a lot of extra hair and fangs and milky contact lenses, so it was cool but also quite frightening. It was unlike anything I’d ever done acting-wise.

Question: How did you get the role?

Holly Valance: I’d tested for the two leads on the show when they were originally casting, so the producers knew me and put me on hold for the role. I decided not to say anything and see what Alex would say.

When he called and said, “I’ve got good news, don’t freak out.” I just said, “That’s great, babe. I found out four days ago!”

Holly Valance: I was nervous for the first 15 minutes, but once we got into it, I switched from being Holly to becoming Lola and just had fun.

Question: Tell us more about the fight!

Holly Valance: The crew were saying, “You guys are going to kill each other! You’re really going for it, aren’t you?” We were both trying to outdo each other.

Question: Are you still in touch with your Neighbours co-stars?

Holly Valance: A few of us still catch up when I’m home or they’re in LA. I had a dream the other night about the show and Alex said, “Wow if you still dream about it, it must have really impacted you.”

It was three years of my life when I was 15 – important years if you’re just a normal kid going to school, let alone working on a top TV show. So they’re all a part of my life, because they’re my mates. 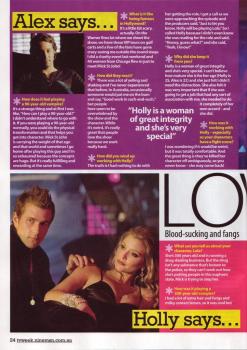 Filed under Alex O´Loughlin, articles, Mick wants to kiss you gently with his fangs., Moonlight