“I’m immune to Alex’s hotness. I see more of him than of any boyfriend I’ve ever had. I’m very privileged because of that, but since I see him so much, I’ve overdosed on his hotness. It’s just the norm.

But other people become weak in the knees around him. They start blushing. They drool. He has that Johnny Depp thing, a special sparkle that’s just magic. How do you define it? The young girls love him, the older ladies love him, and the gay guys love him.

He’s really good at expressive movement and loves musical theater. He’s also up there with the greatest comedians I’ve ever known. I go home with stomach pains from laughing so hard. It’s constant. He’s kind of crude.

English and Australians have a great connection when it comes to humor, and we can be outrageous. You couldn’t put some of it in print. Americans don’t know what to do with us, but I like that.” 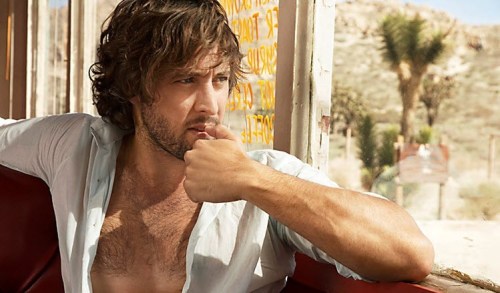 He’s a bundle of energy. And he’s funny — he makes me laugh all night long. With our schedule, 16 hours a day, six days a week, I couldn’t have hoped for anyone more wonderful to work with.

What’s great about Alex is he can turn on the sex for the job, but he never abuses his good looks. He knows his place in the universe.

Sophia and I spend a lot of time together and we’re great mates. She’s really fantastic to work with. I’m Australian and she’s British, and we have similar sensibilities and a similar sense of humor. We grew up with the same TV. We have a lot in common. She’s easy to get along with, which makes a big difference, when you’ve got to spend 18 hours a day with somebody.

But, as far as our relationship goes, in comparison to Mick and Beth, it’s very different. There is no tension between Sophia and I. We’re colleagues. We’re not lovers. We have our separate lives. People talk about on screen chemistry. We work together, and those two characters have this really fantastic chemistry. I see it, when I watch the show back, but it’s not tangible in real life. When you put it on film, it’s there.

We are taking this opportunity to share some of the photos (below) from this TV Guide Sexiest photoshoot in 2008. Serai, one of our regular visitors, has worked her magic on them. She has made them a bit bigger and cleaned up the watermarks. All for her love for this hairy hottie 🙂 And once again I can´t help but say, we need a new photoshoot of Alex.