Miek agreed to share her latest close encounter with Alex at last weekends Women’s Self Defense Seminar with us. Lucky lady has now gotten taught and touched twice by Alex 🙂 You can read Miek’s first encounter here 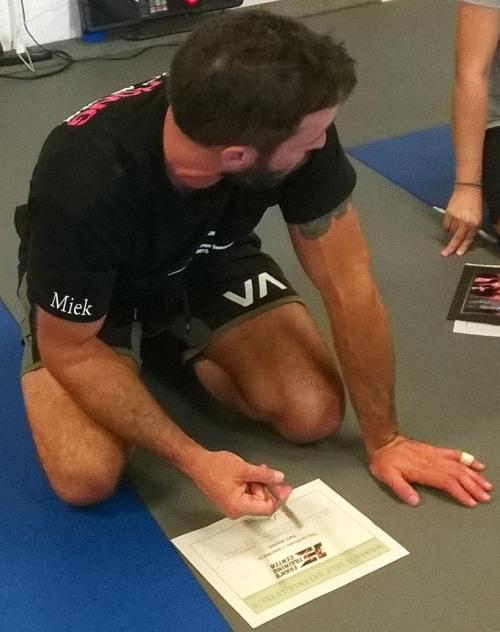 This is her story.

I’ve had the good fortune to attend Alex and Egan’s Self Defense Class a second time. This time around I was with a fellow fangirl, Manu. She has her own story to tell, so I’ll keep mine confined to my own interaction with our man.

The first glance I got of Alex that day was the best one. Beard, black T, black shorts. Gorgeous blue eyes! Alex just came out of the office and while he was talking to Marcia, he looked at me. He locked eyes and came straight towards me and to my astonishment said: “I remember you! From last time …. How are you?… “  I probably had the biggest smile on the planet answering: “yes I was here ” and he kept going: “Good, Good … How have you been?” At that time I realised that maybe remembering me might not be good at all so I asked: “good you remember me,… or is it? Is that a good or a bad thing?“ He was wise enough not to answer that one.

Then he said: “I’ll be right back, have to go to the men’s room … “ [and then with the smirk] “urgent business, you know?!”
He did return quickly and came back to us. This time we said we had some presents for him. He was so engaged and cool talking to Manu while she explained her gifts to him. When it was my time I said: “I don’t have a very healthy present, but I hope you still smoke” and handed him the cigars. He smirked and gave me the iceberg melting glance and nodded he did still smoke. He smelled the cigars and I took the opportunity to ask him for a personalised picture signing. 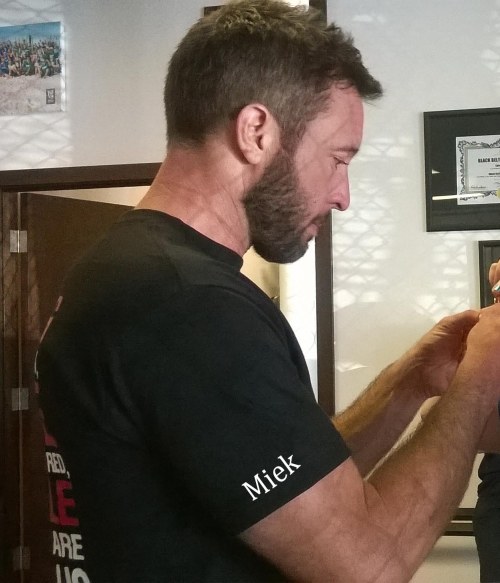 He answered: ”Okay, I’ll do that later, because I have to go into a meeting” He went into the office with two ladies and we took our time getting ready for class.

After 15 minutes Alex came out. Shouting with a grin: “Alright you guys, six minutes … you ready?!”
We sat down for the opening pitch and Alex was introduced: ‘Alex, amazing actor, as you all know, but also amazing martial artist. Four time blue belt as well’

Alex: “Everybody should learn self defense. And we believe that the fitter you are the longer you can keep struggling untill somebody hears you”.

He also talked statistics: “250.000 women get harassed or sexually assaulted every year. And that’s only in America. In fact only 50% actually files charges, so that makes more than 500.000 women getting sexually assaulted every year”
“We’re teaching you the basics of defence, so to get away. It’s not about poking the guy in the eye or kicking them in the balls, although we always say: If it comes up, you do what you have to get away”

Our first exercise was the grab and pull.

We got split up in two groups. Doing some weightball exercises to tire the arms. The other group got the instructions from Alex and Egan. After that we all stood in a circle and one after another we had to move into the circle, where Alex was waiting for us. He was portraying the bad guy.

After that initial line he went for the grab and most women executed the exercise perfectly. Alex applauded all after getting loose, but you could tell sometimes he just let go.

Now I don’t know what he said to me while we were on the mat (stupidly I was only focused on his body), but I distinctly remember thinking: ‘If you are up to no good, there’s no way I’ll just let you grab me’, so I dodged his grab and ran. He had to try to grab me at least three times. Believe me: Getting chased by Alex is a very good thing 😉 When he finally did grab me I didn’t do the exercise properly. Okay … it was unintentional…, (I just wasn’t very good and I should have kept my elbow in, instead of up), but in this case …. It’s Alex and it sure was the best possible timing to get it wrong. He just held on longer because of me fumbling! 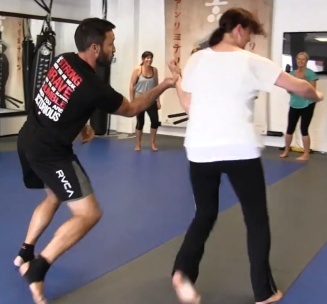 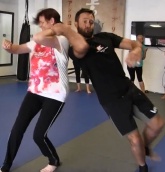 The next exercise was getting up after being on the floor.

He took his time explaining te move. He said: “This is the hardest part to get right. Everybody struggles with this one. Choose one hip, get up on one foot, the other foot in the air, balance yourself, your opposite arm is lifting you up, the other hand in front of the attackers face, blocking his sight. Swing the free foot back and run.” He made it look very easy and he kept showing the move to all women. Sadly he never made it over to our side, but it’s a small gym so I watched very closely, trying to figure out how he was that light on his feet. He just has such amazing body control!!

Next exercise: on the ground in choke position.

Alex was pinned down by Corey and a woman said: “Harder”. Alex answered: “Like we haven’t heard that before!” Grins all around.
Alex: “that’s the worst position you can be in, right?!, so place your knee in the rib, make sure it’s in the rib. Get your arm in front of the attackers face, (on the inside of the attackers arms), wrap your arm all around the elbow and scissor your legs”.

Sadly again Alex never made it to our side.

Next exercise: also on the ground in choke position, another move.

Alex explained: “Take your time, chose a hip, get you knee all away across the hip of the attacker. Get your arms on the inside of theirs, pull the neck toward you, grab the elbow on the outside with your other hand and push, using the others weight against them”

We asked Alex for help with this one when he passed by. He first wanted to watch us do the exercise and then he took the time to explain (Manu I can’t thank you enough at this point!).

He asked assistance and said: “okay, I need you guys to watch okay? You both need to watch what I’m doing”. He started grinning when his attacker moved in: “She’s really going for it!” I couldn’t help giving him a sarcastic look, mumbling: “well duhhh!!!” I don’t know if he heard me, but come on … wouldn’t we all go for that?!?

Alex explained further: “Okay, see what I’m doing? You need to get your hip underneath, otherwise you can’t get your knee up there”. He flipped her over. And then they repeated as she was the victim. He instructed Manu first (she’ll tell all about that herself, but I have to say that while he was telling her where to place her hand his other hand was nicely planted on my back)
“Okay now do it slowly” (There’s a sentence you want to hear from him!!!)
“The other way around” Alex turned to Manu and told her: “No, you attack her”

I wasn’t about to let her attack me that easily so I didn’t let Manu assume the position. Manu looked over to Alex with a “help me” glance and he said [naughty grin]: “spread .. Well I was gonna say spread your legs, but that’s not … I can’t …. let her into your space, that’s what we say: let her into your space” so I obliged.

We did the exercise and he was very supportive: “Okay, that’s it. You got it” (Maybe I should have struggled some more with this exercise…)

Alex moved on and we did some exercises with pulling free when somebody grabs your shoulder, but we didn’t get to interact with Alex anymore.

When it was my turn, I walked up to them asking: “Can we do a fighting pose?” Alex: Yeah, of course, that’s a good one, that’s good!” Egan: “that’s good, I like it!” They must have really like the change of pose, cause when I walked away they still said to each other. “That’s good, I liked that, it was something different. Nice.”

We also had one picture with the four of us. Manu, Egan, Alex and myself (Again: thank you Manu).

After that Alex was doing some press pictures, saw me and said: “you had something for me to sign … Okay, real quick then” He walked towards me, but I reminded him that I wanted it personalised. Alex: “Okay! That’s gonna take a few seconds.” He waved for me to stay there and he walked back to the press pictures. 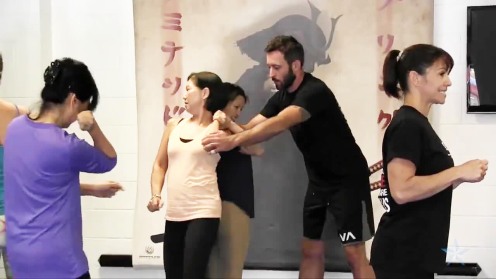 He came back, took the photo I held and sat down. “I’m going to sit down for this one”. Okay … I took that chance to sit by his side. He spelled my name, wrote his standard line and then he took the next pic I had for him to sign. He graciously signed all three pics I had for him.

By now, Alex was surrounded by ten women. All in a circle having him sign pictures and self defence certificates, answering questions. He asked to get all the certificates together and when we got ours in the pile he replied Alex-Style: “Okay, now you guys are just throwing them at me”. Grins all around. He’s so wonderfully sarcastic and has a great sense of humor, but you know this about him already of course. 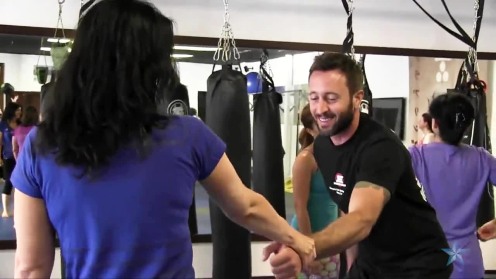 Here are some of the questions he answered while signing away:

(I did ask him what role he would really like to play after H50, but he either didn’t hear me, or chose not to answer)

We all had our pics signed and left him at peace after about 15 minutes.

I was very happy that he spent that extra time with us and that he recognised me in the first place. If you ever get the chance of doing a SDC with Alex and Egan. I’d say go for it. I’ll see you there.

Thank you so much for sharing you wonderful Alex-adventure with us again Annemieke. As much as we envy you for your trip, we also enjoy living it through you.