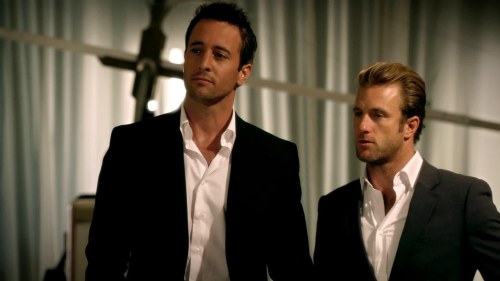 ALEX O’Loughlin and Scott Caan are the type of guys you want to have a beer with. The stars of the new Channel 10 series Hawaii Five-O are cheeky, with a dry sense of humour, quite flirtatious, and would be a lot of fun to hang out with at the pub. Joining them on set in Hawaii, you quickly see that it’s the pair’s blokey personalities that make them so perfect to play Steve McGarrett and Danno respectively in the reboot of the popular ’60s and ’70s cop show. 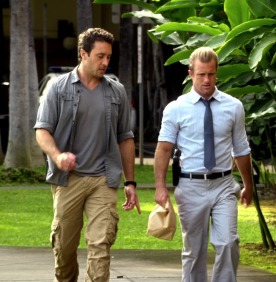 For Aussie heart-throb O’Loughlin, snagging the lead role of McGarrett was as exciting as it was nerve-wracking after the first two American shows he played leads in (Moonlight and Three Rivers) were axed. “I said to (CBS), ‘Don’t pull the pin on this. I’m not doing it if you’re going to pull the pin’,” O’Loughlin says. “They were like, ‘We’re not going to pull the pin’, and I said, ‘Well show me’, and they did. They blasted it all over the world, on the sides of buildings there were posters, and it was incredible. They’ve put a huge amount into this show and I’m grateful – I’m grateful they stuck with it.”

And after watching the first two episodes, it’s easy to see why the CBS network in the US didn’t let it go. The new Hawaii Five-O is fresh, clever, slick and sexy, without any of the rigidness or corniness of the original. It’s a cop show, but it’s unlike anything on TV at the moment with honest scripts, sharp wit, incredible action scenes and some captivating performances. “It’s faster, it’s much more aggressive but, also, it’s much more than just a procedural show,” O’Loughlin says.

“The old Hawaii Five-O’s Steve McGarrett was a man without a past, he was the man on the job and he got the job done and that was it. My Steve McGarrett has a big past. His mother died, his father sent him away so he grew up in the military with a hardened sense of displacement that has sort of forged who he is as a man today. It gives him this edge. He doesn’t care about repercussions. He’s much more ruthless than Jack Lord’s Steve McGarrett.”

While what they are producing is quality TV, the cast, including Battlestar Galactica’s Grace Park and Lost’s Daniel Dae Kim, say it comes at a cost. Both O’Loughlin and Caan talk of having their lives consumed by the show. “I’m so tired, we all are, always, because there’s so much to do,” O’Loughlin says.

Caan, the son of Godfather actor James Caan, adds, “I don’t like the hours and I don’t like that it doesn’t give me the time to do the other things I really want to do. I don’t love being away from home for six months at a time but, you know … I love the opportunity.” 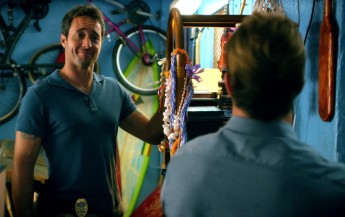 Helping make days which sometimes stretch to 15 hours easier is the closeness of the cast – especially between partners in crime-fighting, O’Loughlin and Caan.

“We have a ‘bromantic’ banter,” O’Loughlin jokes. And the action scenes also make work more like play. With gun-toting bad guys, edge-of-your-seat exchanges of bullets, dramatic car crashes and massive explosions, the action is more akin to a big budget Hollywood blockbuster than a TV show. 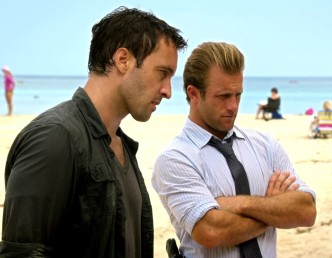 O’Loughlin has loved unleashing his inner-child, but Caan has been taking it easy after having surgery on a long-term knee injury. Caan seems somewhat discontent with his situation but says attitude isn’t a negative reflection on the show. “The second you get happy you get complacent and you get boring. I want the next thing and the next thing and the next thing,” he says. The original Hawaii Five-O ran for 12 seasons, but Caan says he can’t imagine being there for even seven. “I don’t think I could do it unless it became something that I was passionate about,” he says.

O’Loughlin isn’t so fast to rule it out though. “Well, I’ve seen his contract and he’s not going anywhere,” O’Loughlin laughs. “The thought of being on a show for seven years is really scary to me because the most important thing to me is longevity of career and I think it’s true that you can get typecast in TV.

But I think if we get to seven years, by that stage we will both be producers. We will be running the show, making obscene amounts of money, and we’ll both be perfectly happy with the way things are going because we’d both have creative control.”