Ellen: Our next guest star is on CBS’s new drama, Hawaii Five-0. 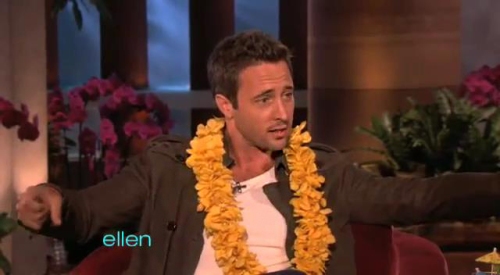 Alex: You need to lei me now.

Ellen: Thank you so much for my lei.

Ellen: How long have you been here?

Alex: Well I’ve been in LA for six years, but now of course I’m in Hawaii.

Ellen: We wanted to make you feel at home, by the way. Where are a … Andy..? Here he comes.

Alex: Wow. Thank you very much. Good. Cheers. What is this?

Ellen: I don’t know what it is. We’ll find out together.

Ellen: It is, without alcohol

Ellen: Andy! And how are you enjoying living in Hawaii? On Hawaii? 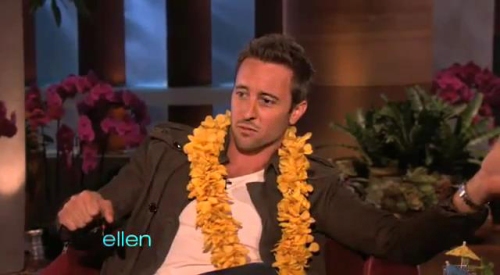 Alex: I thought you were…?

[Then Alex and Ellen start talking about Australian accents and Ellen’s wife Portia, who is from Australia, but does not have an accent anymore.]

Ellen: She doesn’t have an accent.

Alex: What do you mean?

Alex: How is that possible?

Ellen: I don’t know. But you don’t have an accent when you act.

Ellen: And then you do, when you don’t.

Ellen: That was my accent. I don’t really….

Alex: That was pretty good.

Ellen: No it wasn’t

Alex: But she doesn’t have an accent, so you can’t…

Ellen: Well she does once in a while. She’s actually going back this week, to Australia. So when she comes back, she may.

Alex: She probably will. Every year when I come back after Christmas, it’s a bit… it’s sort of thinker and…..

Ellen: So it is hard living there?

Alex: It’s not. I was joking. It’s beautiful. It’s paradise.

Alex: I’m in the middle ….. I mean the hard thing is that I have loved ones here in Los Angeles and in Australia. So now I’m like right in the middle, literally of the ocean. If you look on a map, there’s a little dot. And that’s where we are. But you forget that, because you wake up every day and it’s perfect. It’s beautiful. And the people are amazing.

The people are like so full of life ….. okay the greeting is ‘Aloha’. And that’s also…. they say hello and goodbye, Aloha and it means …. Aloha [waving at someone in the audience]…. And it means love. 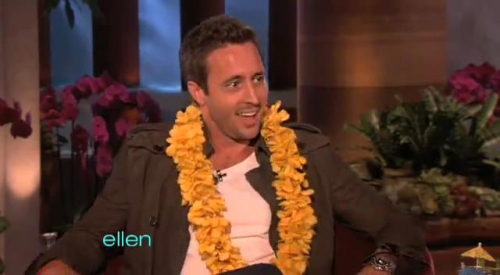 Alex: It is lovely.

Ellen: The kind of people that there are there. And the guy that was in the clip just now. I’m sorry, I don’t know his name, but he was in Lost.

Ellen: So he’s still there. So he just stayed there. He didn’t make it off the Island? What happened?

Alex: He didn’t make it of the Island. He was actually prepared to go on welfare if the money ran out. Cause he’s been there for a long enough to do that. But now he has another high paying job.

Ellen: Right. And have you seen the show before, because you must have been very young when the original show was on.

Alex: I was so young. It went off the air when I was like 4, I guess. It’s a very dated show, like all TV back then. Especially the cop stuff was very sort of postured and stylised. And I don’t have the hair to do what Jack Lord did either. The fringe and the….

Ellen: But you have the new younger … and you also…

Alex: Look at that hair. That would have been the best hair on TV at the time.

Ellen: That was good hair. I remember that hair. Now he didn’t take his shirt off a lot, but you take your shirt of a lot?

Alex: I rarely put mine on.

Alex: That is called leading with your chin.

Ellen: I had no idea.

Alex: That is in fact my body double. They superimposed my face onto the body.

Ellen: No, that is you. And you do your own stunts as well, right?

Alex: That is me.

Alex: You want to hear a funny story. The first time… that’s like 30 feet in the air. And I started on that hand railing, which is kind of wiggly anyway. Holding onto that poll and jumped at… there’s a chain just out of shot, that you can’t see, that I had to grab while I was looking at the baddie. Cause we catch baddies. And shooting my gun at the baddie. And that’s the second time I did it, when I was a little more confident. And the first time… I don’t think we have this photo, but my face… everything else was perfect, but my face was like…..

I was so nervous. I had not worked with this stunt team before. And they were like, “You’re fine mate. Just go up there on the thing and jump across and grab the chain and shoot the guy in the face when you go past”.

And being an Aussie, I was like, “No problem”. But yeah, we did it.

Alex: It worked out.

Alex: [Inaudible] Thank you for having me. 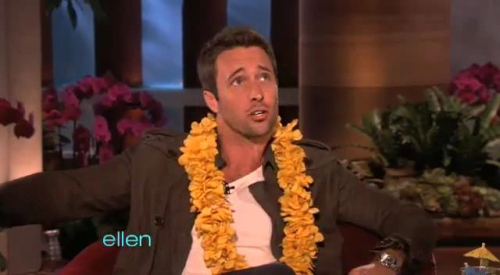