The Steve McGarrett Story – No #73

Kono and Adam are hiding out in China. When they are attacked there, they have to flee again. Adam wants Kono to return home, but she refuses. She says that they have to confront those that hunt them, head on.

Steve receives the results of WoFat’s blood tests back from Max and Danny sees Max handing it to Steve. He confronts Steve about it.

Danny: You had Max run your DNA against WoFat?

Danny: Why on earth would you do something like that?

Steve: Why I would do something like that? Because I suspected that we might be half brothers.

Danny: You and WoFat?

Steve: It’s the only explanation I could come up with, okay. WoFat, he’s a sociopath, he’s a terrorist, he had my father killed. Yet my mother, is protecting him? She’s been protecting him the whole time. Why would she do that? I can’t figure it out.

Danny: Just so that I am clear. You say he’s a psychopath, he’s a sociopath, so you just automatically assume you two are brother?

Steve: I got nothing else. Give me something else.

Danny: Well, this clearly states that he’s not your brother, so maybe your mother is just trying to protect you.

Danny: Well, the way I see it, this thing between you and WoFat, it ends two ways. One of which you are dead. So maybe your mother by visiting him in prison, she’s trying to make peace. Maybe end the blood feud before someone else gets hurt.

Steve: No. Not my mother. You know Doris. She’s up to something. I just wish the hell I know what it was.

Billy Harrington pays Steve a visit. He tells Steve that he offered Cath a job at his new security company. He also tells Steve that Cath turned him down because as far as he could read between the lines, she feels it might affect her relationship with Steve.

Later Cath also drops by and explains to Steve that she did not mention leaving the Navy and the new job offer before, because she was not sure what to do. She also says that she is happy and that she does not want a job to come between them, not even if it is the perfect job for her.

Danny is amused by Billy’s visit…….

Steve: Billy is opening a private security firm, okay. He heard Catherine was leaving the Navy. He wants to offer her a job. He came to me out of respect, to make sure it was okay.

Danny: Haha, okay. Well, uh, I’ll just take a stab here. Did he tell you that offering her the job, has nothing to do with their past relationship. All due respect to you and she’s the only person for the position.

Danny: Funny. Did he also say that you should convince her to take the job? Which by the way is a terrible idea.

Danny: Guy, being the operative word. The guy wants to be working long hours with your beautiful, intelligent, sexy, attractive, girlfriend.

Steve: Danny, Billy and I served together. We saw action together. He’s all integrity and caring.

Danny: That is exactly why it is a terrible idea.

Danny: That is why you would never see it coming. You are complacent. You need to fortify your position at all times. 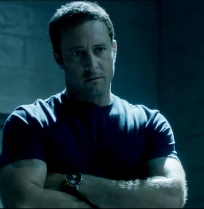 At the kid’s baseball game, Steve gives Cath the go head to take the job with Billy.

Steve: No, no. Listen to me, Catherine. Hey, we’re good. Nothing’s gonna change that. Take the job.

[They hug and kiss]