For me, this episode is the most important one of the 1st season, apart from the pilot of course. It is a very difficult episode to summarize, because nearly every conversation is important. All I can say is that with all the events since this episode, up until now, it makes me feel like a dog chasing his own tail and never catching it. It puts me in a tailspin of questions…..as you will see at the end.

Steve wakes up with intruders in his house. It is clear that they only have one goal – to steal the Champbox. They use a stun gun on Steve and leave with the box. The only person apart from the Five-0 team who knew about the box is Mary. And she was also the only person with a key to get into the house. At Mary’s house, they find signs of a struggle and lots of blood and a tooth. Turns out it was one of Mary’s captors who “lost” the tooth in the struggle with her.

(Sidenote at this time – Up until present time we have had no real clear indication of Mary’s education or qualifications. What was she doing to earn a living in Hawaii? Maybe Steve just paid her rent and bought her everything? Or maybe their dad’s estate was already settled and she got some money from it? It just seems that it was easy for her to pack up her life on the mainland, arrive in Hawaii with one very small suitcase and start a new life)

Steve with Mary’s suitcase, when she arrived.

Steve and the team follow the leads, and the track down a number that Mary called. Mamo is an old-time friend of the family and taught them to surf. Steve and Danny visit him at his place of business, at the beach.

Mamo: What brings you here?

Steve: My sister. Did she come and see you Mamo?

Mamo: Yeah, she came around a couple of days ago. Ask me questions about your mother.

Steve: What did you tell her?

Steve: The truth that my mother didn’t die in a car accident? That a car bomb killed her?

Steve: How did you know, Mamo?

Mamo: Before your mom died in that car, I saw a cop hanging around it, looking under it. I tell you father. He told me not to report it. Not to trust any other cop.

Finally, Steve receives a phone call from Mary. She is tied up in the boot of a car, on her way to an unknown location. Not very wise kidnappers, because lucky for her, Mary still has her mobile phone with her. 😀 Must be the first time since she was kidnapped, that she is out of sight of her captors and able to use her phone to call Steve.
Chin tracks down her possible location and Steve and Danny take a helicopter to get to her and rescue her – shooting and killing her two captors. This still leaves them with the question of who ordered the kidnapping? The only lead they have, is that the dead guys have Yakuza tattoos. Mary confirms that when she was kidnapped, there was also a third guy who lost his tooth in the struggle with her.

Steve: I love you and I’m really sorry about what happened to you today.

Mary: You know why dad shipped us away now? It’s because Mom was killed. He was trying to protect us.

The team raid the hangout of the local Yakuza gang. They find the man with the missing tooth and confiscate his phone. Studying his call history, Kono finds several calls to a businessman called Hiro Noshimuri. (Really funny to me that this man ends up to be the father of her big love – Adam. Interesting way to “meet” the in-laws 😀 )  Steve was busy studying and deciphering the writing on the Japanese postcards from the Champbox and he also found the same name there.

Steve and Danny find Hiro at Pauahi Tower, having lunch. (Hiro Noshimuri – In less than 2 years he will be killed and chopped up in pieces by WoFat. WoFat, sending his body parts to his son Adam)

Steve: Let me tell you something. I know who you are. I know what you’ve done to me and to my family. And I’m here to tell you that no amount of money, or manpower is gonna save you.

Hiro: Save me? From what?

Hiro: What did you say your name was?

Hiro: Ah,  Governor Jameson. So nice to see you again. [kiss her on the cheek]. My date.

Steve: You know this man?

Gov Jameson: I certainly do. We’ve been friends for years. Mr Noshimuri is a most generous benefactor of Hawaii.

The Governor tells Steve that if he wants to do anything against Hiro, he will need clear-cut evidence and a watertight case to do it. Kono finds the empty Champbox in the dumpster behind Hiro’s club. Hiro’s fingerprints are on it. Steve and Danny catch up with Hiro and his brother Koji on the golf course. Steve comes face to face with the man who he now suspects of planting the car bomb who killed his mother. (Koji Noshimuri – By the end of this day he dies in a car accident, most probably orchestrated by WoFat)

Hiro goes to jail for Mary’s kidnapping. Steve promise Koji that he will be on his tail 24/7, watching his every move. But there is also another man with them on the golf course……

Steve: You, what’s your name?

Steve: The game’s over, go home.

(In November 2014 (4 years later), Steve shoot and kill WoFat in self-defence, after WoFat kidnapped and tortured Steve for information about his father) 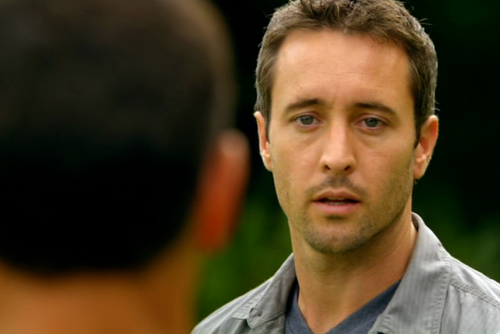 Steve decides that while there’s still a threat, Mary needs to move back to the mainland…….

Mary: I’m having a déjà vu moment. It’s just like before, when dad brought both of us here, but put us on different planes back to the mainland. I haven’t talked to you in 10 years. And I never saw Dad again.

Steve: Hey, we’re going to see each other again, okay. Hey, we will.

Even now more than when I first saw it, this episode leaves me with such a lot of questions: