Listen I don’t care if the world knows, this is the thing. I DVR it, if I don’t get to watch it within 72 hours of the DVR’ing, I get extremely grumpy. I get short with the kids, I get short with people at work.

I have to watch it and I get very emotional when it’s on, when my people gets cut I sometimes get a little,….. I get a little upset. I have been known to get a bit misty.

I vote for more solo numbers of Alex dancing. They are the winners!

Keep on dancing Alex, you´ve got the moves 😀

This interview was recorded in November 2013, at the press day in LA 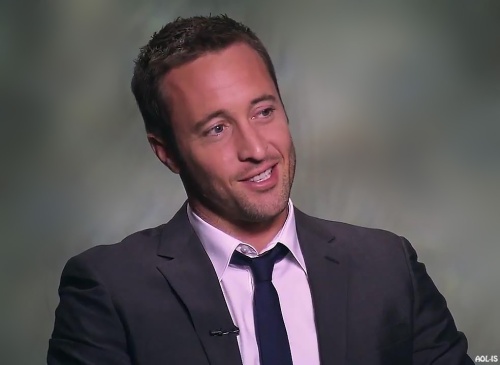 Franck: Since the beginning of the season Kono and Adam are hiding. How does it affect the relation between the whole team?

Alex: I think the team, it’s interesting,  it’s just sort of been the boys, you know. It’s been Chin and Steve and Danny, and Kono we’ve been checking in with constantly. She’s actually about to come back. But I don’t know, it’s sort of,  it’s been weird not having Kono around, but it’s felt like she’s there anyway.

It sort of just works anyway. The structure of the team works. We have been checking in with her on video calls and stuff. I don’t know. I guess a little bit, maybe it’s a bit of a boys club at the moment but it hasn’t felt that fractured

Franck: So Steve’s mom keep tricking him. How much compassion should and will he have with her?

Alex: This is an interesting question because. I don’t know what they have planned. I haven’t seen any scripts that reflect it, but when they do write something, I am gonna have a part to do with it, because this is an extremely painful topic for this man, or for anyone.

You can’t write something that dramatic, like a woman who faked her own death for 20 years and then coming back and then leave again. You can’t write it haphazardly. You have to be very careful when you write that because….. I know it is like a cop show and stuff, but if we are talking about things that would affect a human on an emotional level, it could potentially kind of destroy someone’s trust with women forever.

So it’s a tough one. It is something that is just pushed down for now.

Alex: Yeah, it is a beautiful episode.

Franck: How important was it to pay homage to Hawaii? Because that is where you guys are shooting.

What happened to them after the segregation that went up with the camps and what happened. All the stuff that I didn’t know about. I didn’t know there was internment camps in Hawaii. I didn’t know so ignorant about the way it went down. It is an important episode. It airs on December the 6th, on the eve of the anniversary of Pearl Harbor.

And there is a really nice twist with the McGarrett family and the case that actually goes down. And then we had some incredible actors. I might actually watch that one.

Franck: You do not watch them all?

Alex: No I don’t watch them all. It’s not beneficial for me to watch myself.

Franck: So talking about actors, there is a lot of quest stars this year, Melanie Griffith is part of them?

Franck: Jorge Garcia, is that how you pronounce it? 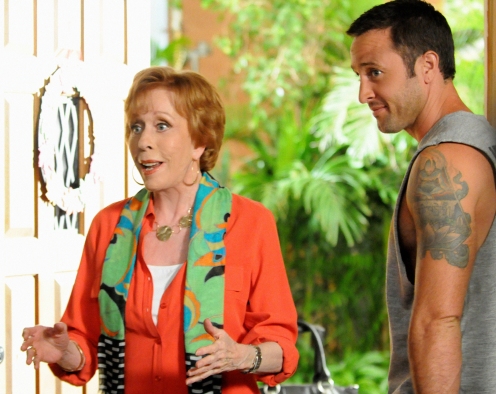 Franck: And Carol Burnett as your aunt, that is something?!

Alex: And Nick Jonas. Yeh, Carol Burnett, that was, oh man I mean. It was kind of like a dream for me. She’s a generation ahead I didn’t grow up with her show, but of course I seen it. I’ve seen so much of her work over the years.

Working with an icon like that is …. It really makes you sort of feel so humble. It brings you back to your own size. I had to do one scene with her, that was an emotional scene for McGarrett, and it’s funny. She’s like, when you have to do a scene that is emotional and heavy, a lot of it’s about the actor you are working with, whether or not you can trust them.

Franck: Talking about actors. How well do you get along with you fellow actors from Australia, Simon Baker Hugh Jackman? You guys have some relation together?  Are you like a bond?

Alex: For sure, it is a small community, so a lot of us know each other. I actually don’t know Hugh. I’d love to get to know Hugh. I know Simon, I know a lot of the other guys. A lot of us worked together back in Australia too.

There is not that much happening over there. It is not like here. It’s great and the community from when I first came out here in ’97, the community is so much broader. So many more Australians here now. It’s nice, a lot of expats

Franck: You have a son. How is it to raise him in Hawaii? He was born just a year ago?

Alex: Yeah, my youngest son, he’s the best. He was a year old last week. He’s great. He loves it, he’s got no worries. He is just up and around walking and doing what one year olds do. Trying to touch all the dangerous stuff. Trying to break things. Trying to ride the dog. He’s having a good time.

Franck: Last question. How do you wish to see, not right now, but when the show end – What you wish is for Steve, for the last episode for Steve, to go, to be, to do?

Franck: Like something peaceful or something dramatic? Knowing the character?

Alex: No, I think that it would have to be that he find some sort of peace, with everything – his dad, his mom, with everything the way it’s all gone down. He’s had a lot of loss that guy. He’s lost a lot of family, so I think it have to be him coming to a place of resolution and peace, a place where he can live forever, calm.

You can watch the video here