“Why,“ a limo driver asks, “when McGarrett tells Danno that he’s going to meet him at Pearl Harbor, they show shots of Molokai?“ Since the Hawaiian island of Molokai does not lie anywhere between downtown Honolulu and Pearl Harbor on the island of Oahu, it’s a fair question.

“Hawaiians have their own little gripes,” O’Loughlin tells Zap2it, taking a chat break between takes on the couch in the set for his character’s office, in a former newspaper building in Honolulu (the scene for most of the day’s conversations). “In all seriousness, we try to show as much of Hawaii as we can.”

The Australian — who reverts to his native accent when not filming — has also taken up surfing. “I’m not the greatest surfer in the world,” he says. “I’m an Aussie, so I don’t have any excuse, but I didn’t do much of it as a kid. I’ve got a bunch of boards. I’ll tell you what my problem is: I think I should be hitting the top of all the waves and getting barreled, but none of that happens. I get on a longboard, and I end up trying to look cool and have a good time.”

Currently in its third season, “Hawaii Five-0” is a contemporary re-imagining of the original 1968-80 TV series, which made star Jack Lord just about the biggest thing on Oahu after Don Ho and Diamond Head. ABC’s new “Last Resort” also shoots there — using some of the same locations as “Lost” — but it’s not actually set in Hawaii. Like its predecessor, “Five-0” takes full advantage of the locale. “I love it,” O’Loughlin says. “I’ve been blessed here.”

Co-star Scott Caan, who plays McGarrett’s partner, Danny “Danno” Williams, misses his hometown of Los Angeles, but he and his co-star have found a way to pass time on the weekends. “Alex is getting into jujitsu,” he says, “so we go Saturday mornings. We train. If there are waves, he’ll surf.”

Regarding O’Loughlin’s martial arts prowess, Caan says, “He just started. He’s good, considering the amount of time he’s been training. I should be a lot better than I am, considering I’ve been doing it for 15 years.” As to whether he keeps a won-lost record for himself and O’Loughlin, Caan says, “I’ve been doing it for 15 years. If he’s beating me more than I’m beating him, we’ve got serious trouble. But he’s strong, and he’s getting good.” 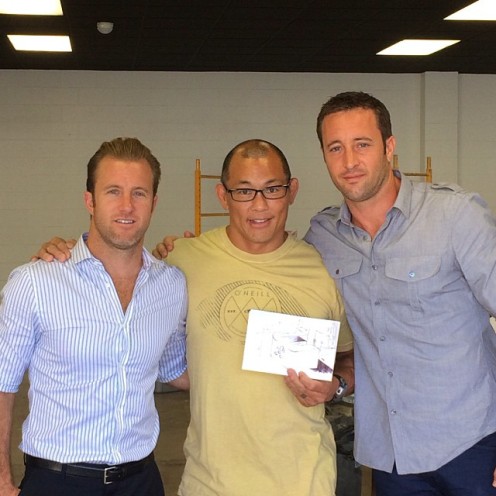 On set this day is recurring star Christine Lahti, who’s playing Doris, McGarrett’s long-lost CIA assassin mother, who came back into her son’s life after having abandoned the family for their own safety years before. She’s preparing to shoot a scene with Taryn Manning, who plays Steve’s sister, Mary.

“She’s really good,” Lahti says. “I haven’t worked with her yet, but I watched. Alex is just phenomenal. He’s such a good actor. That first big confrontation scene in the first episode, I felt, ‘Ah, this is so great. I don’t have to do any work, because he’s so great. I just have to look in his eyes and respond.’ He’s talented, boy. He’s the real thing.” 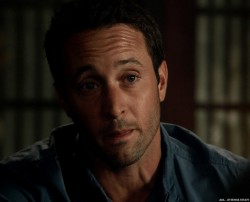 As the day winds down, Caan hitches a ride to the parking lot on the back of one of the cast members. Moments later, Grace Park, who plays HPD Officer Kono Kalakaua, sits on a ledge near where Caan passed moments before. “Oh, no,” she says upon hearing about the escapade. “You’ll totally get the wrong impression!”