It looks like Alex is taking the Japanese wedding theme from Morimoto Waikiki even further by visiting Japan on his Honeymoon.

Seeing the picture from Masi Oka on Twitter this morning, reminded me of this article from 2010 – specifically Alex’s answer to the second last question…….

Going Away With……. Alex O’Loughlin

Born in Canberra, Australia, and raised in Sydney, Alex O’Loughlin’s thick Aussie accent is nowhere to be heard on “Hawaii Five-0,” where he plays the lead character Steve McGarrett.

“I heard that some people thought I was American,” says the 34-year-old actor during a break from shooting in Honolulu.

“I take that as a great compliment. I try to be as authentic as I can for each role that I take. But once I’m done shooting, I sound like me again. I can’t hide it.” “Hawaii Five-0” airs Mondays on CBS.

Question: What is your favorite vacation destination?

But Mexico is such a wonderful country in general. I love going out to Chichen Itza and climbing the pyramids and seeing the ancient ruins.

The food is amazing, too. The ceviche there was some of the best I ever ate.

Question: Where are your favorite weekend getaways?

Question: What are your favorite hotels?

Alex: Claridge’s in London, the Mercer in New York City, the Maya Tulum Resort in Mexico, the Establishment in Sydney, and Como in Melbourne.

Question: What are your favorite restaurants?

Question: How do you like being based out of Hawaii now?

Alex: I love it. The people are very much like Australians — very laid back and they don’t care about the whole star system. Some people might ask me for autographs or to take pictures with them and it’s my pleasure to do that because the Hawaiian people are really cool.

It’s the tourists who can be less cool. Before I came to Hawaii, I didn’t think I’d find any similarities between it and Australia. But the beaches are pretty similar and now that I’m here it really does feel like home.

Question: What’s your take on Spam?

Alex: I don’t get the love for Spam here. I hate it! I don’t know why they eat it. They have all this fresh seafood and delicious food. Why would they want to eat this?

Question: When you go away, what are some of your must-have items?

Question: What are your five favorite cities?

Question: What kind of research do you do before you go away on a trip?

Alex: I mainly research food and lifestyle before I travel. However, when I arrive in a city, I try to talk to locals and get their opinions.

Question: Where would you like to go that you have never been to before?

Alex: Tokyo because I love the Japanese culture. I love the food, the fashion, and the respect the people have for one another. It’s so distant and seems so different from the western American stuff, which is fascinating for me as an Australian.

I did martial arts from a young age and studied Zen. But the best way to learn about a culture is to travel and immerse yourself in it.

Masi: Al and I at the Tsukiji fish market

(And it looks like Alex will continue his love of rings, by wearing a wedding ring. 🙂 )

Question: What is your worst vacation memory?

Alex: I love spicy food so that wasn’t an issue, but I had some bad meat and got food poisoning in Mexico. Other than that, it was a great trip. 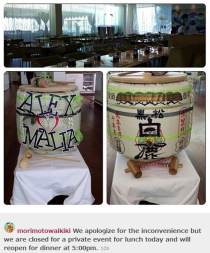 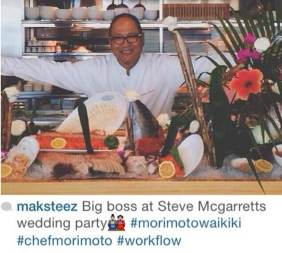 It is a wooden case to present ceremonial Japanese sake!!
The thing on top is like a hammer for brides and grooms to break the top round wood of the case. The sticks in front in the left picture are like spoons for them to drink the sake inside. They finally share the sake with their guests.

From @monimoob on twitter: Mom says that’s a traditional wedding salutation for a long & happy marriage!!!! 🙂

(Looks like, with the inspection of the food, the restaurant made the grade for a wedding reception 3 years later  😆 )

You can also read the article about Chef Masaharu Morimoto’s debut on Hawaii Five-0  BY ELIZABETH KIESZKOWSKI in Honolulu Pulse:

Once again it feels to me that Alex is showing us how grounded and real he is as a person ❤ – visiting with Masi in Japan, while on honeymoon and using this restaurant for the reception.

Not only embracing Hawaiian culture, but also those that he find interesting.