When I first saw Alex, it was in ‘The Back-Up Plan’ on my TV screen in 2011, one of the things that caught my eye, was his profile. To me it was just perfect!

And it was just one of the many reasons that got me interested in him…….. 😀

You can imagine my surprise when I first saw somebody suggest that Alex might have had some work done to his nose. Did I miss anything? For me his profile in ‘Oyster Farmer’ (the 2nd movie of him I saw), was just as beautiful as in ‘The Back-Up Plan’. To me there was no suggestion that his profile was any different. Why would people even think that? 😕 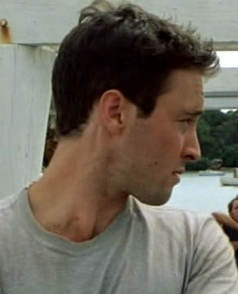 This study has been in progress for a long time and  I just want to share my ‘agony’ about it, because it has been the most difficult for me so far. Difficult, because I kept staring at pictures of Alex and not knowing which ones to use! 😛

All of us have our own favourite reason why we adore Alex. Some purely follow him for his acting. Others might just appreciate how gorgeous he is, but most of the fangirls we come across here, loves the full package……. 😀

As I said earlier I have seen so many comments, searches and speculations about Alex’s “nose job“. Even some of my online friends regularly ask the question, wondering if there have been some small alterations done to his nose. But you all know me by now, whenever there is a question or a statement about Alex out there, my mission is to prove it as either correct or show it as false speculation – for me the outcome is not really relevant or important, but getting as close as possible to the truth, is. 🙂

Before I continue, I just want to emphasize again – I do not see any cosmetic work as either right or wrong. It is always the choice of each individual to do as they wish with their own body. For some it might be the best thing in the world to do, but for others the worst ……. So for me this is not about the judgement of cosmetic surgery, but about the facts that are visible to us. I love to clear up questions and speculation by finding the truth, without judging any actions.

So what is the most logical way to find if there has been any cosmetic work or alterations done to a nose? My suggestion in such cases is to take the earliest pictures and the latest pictures we can find of the person and compare them – that should give us the best answer about any possible changes. If there are differences, try to establish when the change took place.

But the key is always to compare pictures from the same angles and in the same type of conditions with each other (A classic case of comparing apples with apples and oranges with oranges). Different facial expressions (smiles, frowns etc.), lighting, slight changes in angle of the shot, make-up, body weight, scruff, wearing glasses and even photoshopping done on some pictures, can play tricks on what we see. 😐 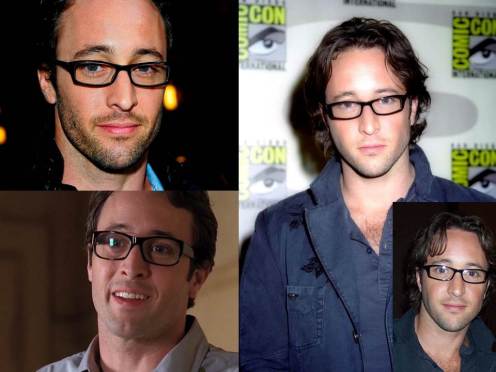 What to look for?:

I am not an expert on nose jobs or cosmetic work at all, but common sense tells me that someone would do it to correct a ‘flaw‘ or something that they feel is an imperfection. Something that, when it is corrected, would let them look prettier or more handsome. They might feel that altering how that feature looks, will let it fit better with the rest of their features.

What are the things that people would ‘correct’ in most cases?: 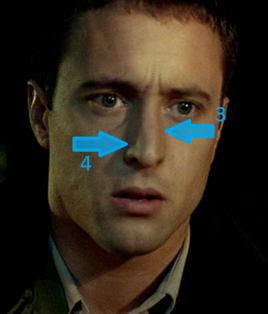 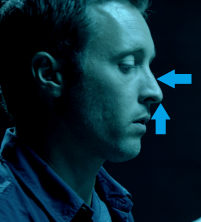 We took pictures of Alex’s earlier characters and some of his latest and compared them – and this is what we see: 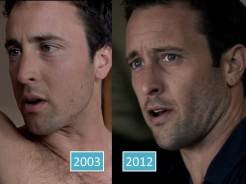 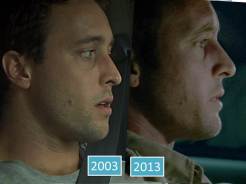 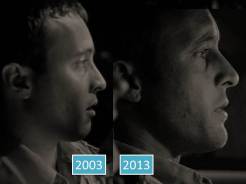 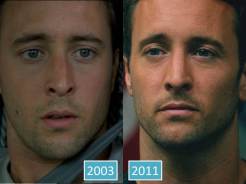 I think a way to explain why people would ever think that there had been work done, is to show how, with in a matter of seconds, his nose takes on different shapes and sizes. Here we show  Alex’s nose in one episode and show how it changes with different shots in a scene …… 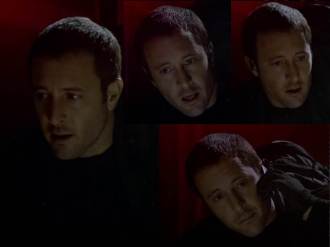 Can you see how his nose sometimes seems to look different within a few different screencaps.

The picture of Alex as a barman from 2002, is one the earliest pictures available of him as an adult. Here we compared it to a few pictures from over the years – looks pretty similar to me ….. 🙂 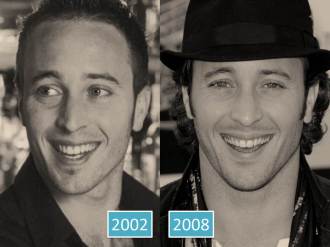 My conclusion to all of these comparisons would be, that if a nose at present looks the same as a nose in 2002, then any pictures that might look different over the years, where just illusions of light, make-up, angle or some other reason that would make it look different to what we might expect ……

All I can say after this study, is that it is all just perfect. Not just the nose, but the lips, the jaw, the ears, the brows and the eyes ……… the Alex profile is PERFECT!

We hope you all enjoyed studying all the pretty so closely with us. After all, everything we do here, we do to have another excuse to look at Alex some more and to have more fun with him!