As most of you know, Alex and  Jiu jitsu trainer Egan ran a charity seminar at Egan’s brand new training centre, to teach women self defense. All proceeds from the event went to the Kapiolani Medical Center for Women and Children. We already gave you the story from K, one of the local ladies who attended the seminar. After we read Miek’s very entertaining story of her traveling from the other side of the world to attend it, we thought it might be a great idea to also share it with you. Hope you enjoy it as much as we did!! 🙂

This is the conversation between Paula and Miek, that lead to her sharing her story with us:

Miek: Thanks to your blog, I’ve found out about the seminar for women’s self defense. Couldn’t resist. Didn’t have the money or the vacation time, but found a way anyhow to go and see him. He really is that nice in person. And that gorgeous, But then again… we already knew that just by looking at all of his work

Paula: Lucky you! Drop us a note if you want to share your story of that day

We got one, but always eager to hear more

Miek:  Sometimes you just gotta go for it. I live in Holland. Took a 22 hour journey in and a 22 hour journey out to stay over in Honolulu for 4 days. best decision I ever made. Was totally worth the money and the travelling time.

Paula: Did you fly over there just for this thing? Wow, that is serious dedication

You are my heroin

Miek: Wow, that’s a nice perspective! Most just call me an idiot

I just felt I had to do this, so I did. It’s like they say: You never regret what you did, only what you didn’t do.

How I got my AOL bruises 🙂 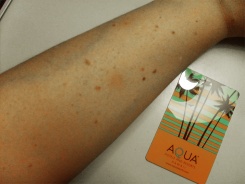 As some of you already know, I was also at the seminar last Sunday in Honolulu, with Alex.

It was surreal….. Still not sure it really happened, but that might also be the jet lag, since I flew in from Holland just for this special event and now I’m home again 😥

I was with the 3 pm group, but I arrived an hour early. (partly because I was afraid of being late and of course…more Alex time 😉 ) The other group was having so much fun with him. He’s constantly laughing and making jokes with everybody. You can really tell how much he likes being there in the studio. I was just sitting there taking a picture or two when the photographer came up te me, to tell me that picture taking wasn’t allowed.

At some point Alex passed me by and looked me straight in the eyes for the first time and believe me “gulp” doesn’t even come close. I literally froze!!! He’s is so gorgeous with those blue eyes of his …. All my plans of playing it cool went out the window and I just sat there staring. When the first class was over, they were all taking pictures with Alex and I have to say, he takes his time for that. I guess he realises how important it is for us women to be a bit representable in our once in a life time photo-op.  Our group was heading for the changing room as the first group got the opportunity to talk to him some more.

Finally it was our turn. The introduction, the first defense move. I could only think about concentrating on what was being said, because I didn’t want to lose my head again. How stupid is that … I’m in the room with AOL and I can’t seem to bring myself to look at him again. Felt a bit like a teen.

Of course Alex comes and joins us for the first assignment!!! Thank god my nerves disappeared at that time and I could (thank god) talk to him and practise with him, exactly as I wanted to from the get-go. My partner was asking questions and Alex explained as many times as needed, asking me (!!!!) to help out by making me grip his (very hairy and very muscular) arm 😎 . He then twisted himself lose, swinging right by me. And again. And now he grabbed my arm, where I had to twist lose … and again. I was so glad with my partner that kept asking questions. Best partner ever!

Sadly that was the last Alex worked with us, he had to divide his attention. I don’t know if I would have survived him sitting on top of me anyway, so maybe this was for the best 😉 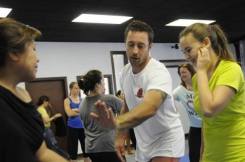 A few funny moments in class I just want to share with you all:

At the end of the class there was the photo session and then Alex said “sorry guys I have to get home, to my kids”. Which is a good thing of course. Isn’t that why we all love and respect him so much?

I couldn’t let him go without giving him a little fingerpuppetbook we make at work. Simply because of the title: “Little Lion”. He was so sweet about my little present: “Oh man, no way, that’s awesome, thank you” Turning me to jello all over again.

Outside I saw Egan and Alex by his car (a big, Ford pick up truck – in case anyone wondered what kind of car he drives) and asked for an autograph saying I’m sorry for taking more of your time, where he graciously replied “of course, no problem”and then even telling Egan he had to sign my leaflet as well. 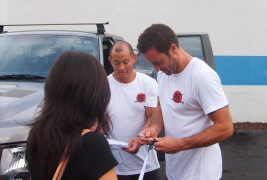 If after all of this there’s anybody left that doesn’t agree with us that Alex is not only the hottest guy on TV, but also the nicest to his fans, than here’s another little thing for them:

Did you know our multi-talented mancandy designed the new studio all by himself? 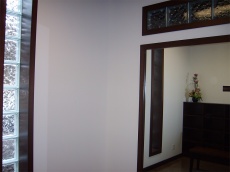 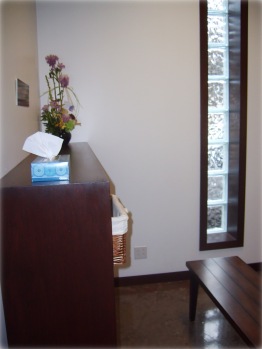 Is there anything he can’t do?

Thank you Miek for your story. Had so much fun laughing at his nut-contact 😉 – Paula

To complete the picture about the new gym and Alex’s contribution to it, we share some excerpts of articles from the last few months:

Marcia Inoue, co-owner and wife of the well-known mixed martial arts champion Egan Inoue, said that a rapidly growing business forced the couple to expand. “The neat thing about it is that Alex O’Loughlin from ‘Hawaii 5-0,’ one of my husband’s private lesson students, loves design and architecture, so he spearheaded and designed the whole gym with our input,” she added. 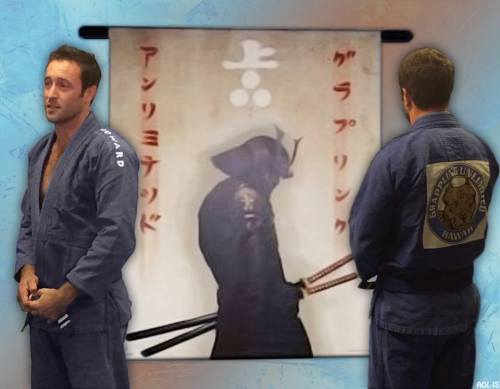 Inoue is extremely proud of the new gym, called Egan’s Training Center, and especially thankful to O’Loughlin, who was responsible for the fundamental design, layout and materials. “I also organized the construction team,” adds O’Loughlin. “In addition to that, over the last six months or so I’ve worked closely with my friend Steve Finch in updating the artwork for Grappling Unlimited, including a commission samurai piece that now hangs on the back wall.” The new training center also has a hexagon cage and additional mat space, which O’Loughlin lists as his favorite things, along with a unique concrete bench they poured near the reception desk.

We think that there are no more words needed to explain why we adore this man so much……..!!