Alex O’Loughlin – Is he brave or just a “girl” like Danno? – An Update

We have had such a lot of interest in our first post  in regards to Steve injecting himself, that we decided to do a follow-up with all the new detail we came across while intensifying our study.

Two weeks ago in Hawaii-Five-0 Episode 3:04, we saw the now famous injection scene where Steve gives himself a tetanus shot. We asked ourselves the first and big question of whether it was actually Alex “ injecting” himself?

We started of  by breaking this scene down in two parts and to see what we have:
1. We have a shot of Steve from the other side of the table where Danny is standing. We see Steve pulling his pants and shirt away and give himself the injection. He is not showing a lot of skin at all.

2. Then we see a close up shot of him injecting himself and his pants pulled down quite a lot further than in the previous shot. (Yummy!)

We want you to look closely at the first scene. Where is he injecting himself? Please be aware that the photo’s are not good quality because we had to zoom in quiet a bit:

Not only did we see that Steve “injected” himself on the hip bone very much to the front, but it also looks like Alex was using protection (like any wise man should) Can you see it?

A blue film like thingy at the front of the needle. And not only that, there seems to be a square like flesh coloured plaster on the spot as well – making doubly sure of protecting himself. (Maybe the plaster irritated him a bit and left that red mark on his hip we see later on?)

Let’s move on to the close up shot where he is injecting himself on the bum this time. 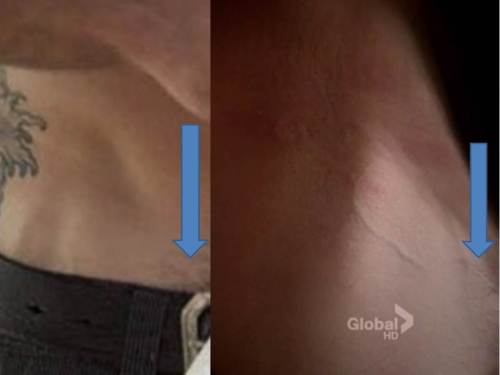 Have a look at where the blue arrow is pointing. Is it possible that we seeing the same “scar” or mark on both pictures?

Then there is also the question about the hand. Is it really Alex’s hand? Thanks to ‘Amberrocks’ for pointing us in the right direction!

In the top right photo, you see the hand from the injection scene. Look at the “line” we highlighted running across the first finger. That “line” seems to be the vein running across Alex’s finger as shown in the other pictures. We believe that it is a good indication that it was in fact Alex’s own hand.

Original poll with results can be viewed  here !

or here you can cast your new vote: